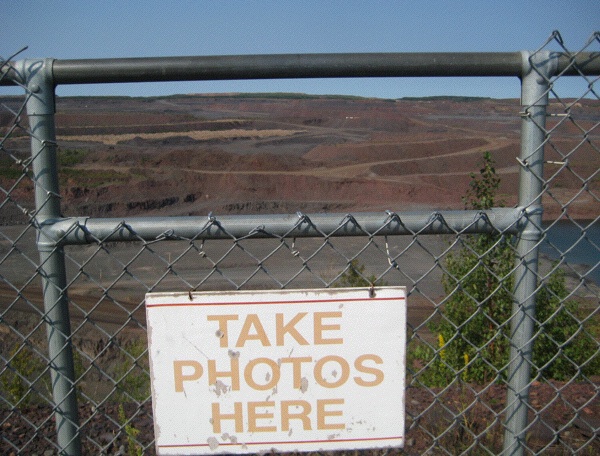 “The Grand Canyon of the North”: (Photo: Tim Murphy).Hibbing, Minnesota—If you’re ever thinking of recruiting a band of immigrant followers, buying up a big chunk of mineral-rich real estate, and founding your own eponymous city, there are a few critical guidelines you absolutely must adhere to. Fresh water is always good; so is an escape plan, lest things start to go all Roanoke. But most importantly—and this really can’t be overstated—make sure you’ve thought of something really badass to say, so that it can someday be etched on the giant granite statue commissioned by a loving future generation.

Frank Hibbing understood these lessons well. Which is why, as he stood atop the future site of Hibbing, Minnesota in January of 1893, less than two decades before the world’s largest open-pit ore mine was blasted out of the ground on which he stood, he said this: “I believe there is iron under me. My bones feel rusty and chilly.”

That is actually what he said. Hibbing wouldn’t exist, at least in anything like its past or present state, if it weren’t for the taconite that Frank felt so poetically in his femur. Or rather, Frank’s Hibbing doesn’t exist today, precisely because of the iron. Less than three decades after our hero planted his flag in the Mesabi Range, mining companies, eschewing mining companies’ long-held tradition of quietly buying out select residents at decimals on the dollar until the whole town has no choice but to leave, paid for the town to relocate a mile-and-a-half south so they could extract the ore beneath it. 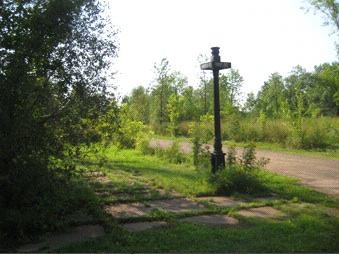 Old Hibbing: (Photo: Tim Murphy).What’s left of Old Hibbing is now a disc golf course and city park; there are still lampposts at every intersection, with street signs intact; you can walk up the steps to the old high school, which is no longer there; you can walk along the sidewalk for stretches, until the grass gets too thick. It reminds me, in the way a living neighborhood can just return to nature, of the Lower Ninth Ward, only without the ghosts.

But I’ve buried the lede, because the most interesting thing about Old Hibbing isn’t that the town was rolled away on logs; it’s the thing that took its place—the massive open-pit mine that the local tourism bureau has affectionately dubbed “The Grand Canyon of the North.”

You can see how it got the name—the late afternoon shadows give the gravelly ridges a hue of reddish-purple, and even from the observation deck at mine’s edge, you can’t see the end of it. There’s even some stagnant water at the very bottom. There’s a park where kids can play on giant pieces of old construction equipment and a ubiquitous viewing station that’ll show you an extreme close-up of the mine down below for just a few quarters. But if the Grand Canyon’s beauty could turn a non-believer into a theologian, Hibbing’s canyon has kind of the opposite effect: This is what we’re are capabe of—turning mountains into pits and towns into jungles.

Before I get back on the road, I step into the senior-citizens-run visitors center for a Coke and some old photographs, and stumble into a dispute.

“I worked out here during da war,” says a woman with a walker.

“You did?” Her companion in the overalls doesn’t believe her.

What kind of work did Mary do? “Scramming—scraping ore off the rocks. Shovel and a hole and a rake. My husband worked for, what was it, for-ty? For-ty-five years. He was 58. He worked there since he was 18. I couldn’t stand being underground.”