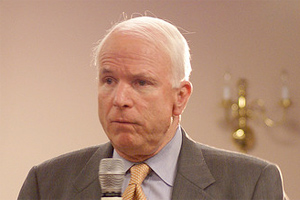 In theory, John McCain’s right-wing madness could come to an end on Tuesday, when he is expected to prevail over former Rep. JD Hayworth in Arizona’s Senate primary. Faced with a stiff conservative challenge, McCain has spent this election cycle defying many of his long-held moderate positions.

In fact, his transformation from aisle-crossing, party-bucking maverick (see this 1998 Mother Jones interview) to cookie-cutter conservative has been years in the making. During his 2008 presidential bid, he began to lurch rightward on a litany of issues in his play for the GOP’s conservative base. His choice of Sarah Palin as a running mate was the final blow for some of his truest believers, who saw it as political pandering at its worst. But the failed White House run was just the beginning of McCain’s transformation into an ideologue. Behold some recent flip-flops:

Immigration: Back in 2006, McCain was among the primary sponsors of a bipartisan reform bill at the heart of Bush’s immigration push, and worked closely with Ted Kennedy on the issue. The bill included a path for illegal immigrants to gain citizenship if they paid a fine. Hayworth latched onto the bill early in the current primary fight, blasting his rival for supporting “amnesty,” whereupon McCain denied that he had ever supported legalization and ratcheted up his anti-immigration rhetoric. He proceeded to push aggressively for border security, speak in favor of Arizona’s harsh new immigration law, and even support hearings contesting the 14th Amendment provision that ensures American citizenship as a birthright.

Gun Control: McCain was once a vocal advocate for stricter gun-control laws. As Think Progress points out, he even appeared in ads for the nonprofit Americans for Gun Safety urging states to close the gun-show loophole that lets people buy firearms without a background check. But McCain made a dramatic reversal this past spring. He introduced a bill that would force the District of Columbia to repeal its gun-registration laws and allow residents to transports firearms within the district.

Don’t Ask, Don’t Tell: Four years ago, former war hero McCain seemed willing to consider changing the military’s ban on gay service members. “The day that the leadership of the military comes to me and says, ‘Senator, we ought to change the policy,’ then I think we ought to consider seriously changing it,” he said. But in February 2010, when Defense Secretary Robert Gates and Joint Chiefs Chair Mike Mullen testified that they supported Obama’s desire to repeal DADT, McCain rebuffed them. “At this moment of immense hardship for our armed services, we should not be seeking to overturn the ‘don’t ask, don’t tell’ policy,” he said after the testimony.

Climate Change: Once a key supporter of cap-and-trade legislation—he co-sponsored a 2003 bill and declared during his 2008 campaign that the country urgently needed to address global warming—McCain now calls it “cap-and-tax,” and has tried to claim that he never supported the policy to begin with.

McCain could soften his newfound positions prior to November. But since he’s safely ahead of all of his Democratic challengers, there’s little incentive for him to change up now. Moreover, his flip-flopping mirrors his party’s rightward creep: For example, Sen. Lindsey Graham—whom many have compared to the old John McCain—has similarly abandoned efforts to work with Democrats on climate change and immigration.

If the GOP expands its congressional ranks significantly this November, it could bring a degree of ideological diversity back into the party if moderates like Mike Castle, Charlie Crist, and Mark Kirk are elected to the Senate. But given the beating he’s received from the conservative base since stepping into the national spotlight, it’s unclear whether the old McCain will ever come back.