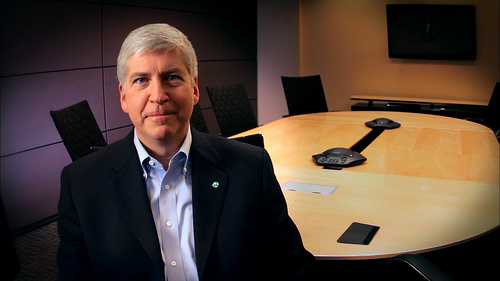 Today, the citizens of hard-hit Michigan—13.2 percent jobless rate, recurring budget crises, educated young people fleeing the state—hit the polls for the state’s gubernatorial primaries. The race to replace largely unpopular Democratic Governor Jennifer Granholm, who’s term limited, is closest on the Republican side, with the top three GOP candidates separated by only a few percentage points in the polls. That’s the primary you’ll want to watch: With an anti-incumbent mood sweeping the country, and an anti-Granholm sentiment as well, whoever wins the GOP’s highly competitive nomination today will likely claim the governor’s seat in November.

Running neck-and-neck in the Republican primary are wealthy businessman Rick Snyder (26), Attorney General Mike Cox (24), Rep. Pete Hoekstra (23 percent support), and Oakland County sheriff Mike Bouchard (10). Like the Jeff Greenes and Linda McMahons of 2010, Snyder, 51, has drawn on his considerable wealth to spend millions on campaign ads, boosting his stature from relative unknown to frontrunner in the polls. The rest of the GOP crowd are longtime state pols, guys with name recognition who’ve been around Michigan politics for years.

They also skew to the right of Snyder, who’s avoided the culture wars and is even suspected as a closet liberal on social issues. Bouchard, for instance, has called for an Arizona-like immigration crackdown in Michigan, and strongly courted the local tea party vote. Cox and Hoekstra are both traditional Republicans, selling voters on plans to slash taxes and trim state government spending. To back Hoekstra, former presidential candidate Mitt Romney is blanketing Michigan airwaves today to sway voters. But if there’s one thing that unites all the GOP’s candidates, it’s their mastery of the art of bashing Granholm for what they consider her eight-year mismanagement of a state that’s still ailing from the decline of the automotive Big Three.

For Democratic gubernatorial candidates Virg Bernero and Andy Dillon, Granholm’s legacy is as big an obstacle as unemployment or brain drain. The polling on the Bernero-Dillon race has fluctuated wildly: In mid-July, Dillon, the Michigan house speaker, led Bernero, mayor of Lansing, the state capitol, by 9 points; a few weeks later, though, a new poll showed Bernero up by eight. It’s anyone’s guess who holds the advantage heading into today’s primary.

Not that the Democratic primary winner will matter all that much. It’s pretty much a lock that today’s GOP winner will go on to replace Granholm as governor. The question is, Will that GOPer be an old-guard, familiar face like Pete Hoekstra? Or will the rise of the self-funded, wealthy dark horse candidate carry Rick Snyder past the career politicians? Snyder has been promising fresh ideas to staunch the bleeding in Michigan’s economy, casting his opponents as the same-old GOP party line. By day’s end, we’ll see if Michigan voters buy that line or stick with who they know.