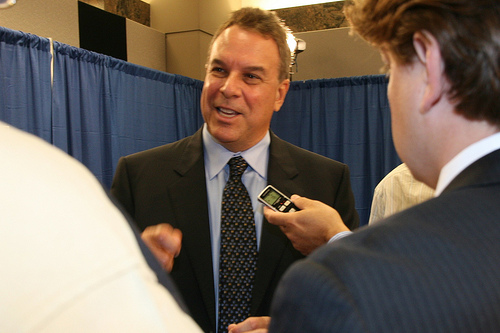 Down in Florida, not a day goes by without some good ol’ mudslinging and accusations of corruption and graft by the Sunshine State’s two Democratic nominees for US Senate, Rep. Kendrick Meek (D-Fla.) and billionaire Jeff Greene. In the race’s latest twist, Greene, trailing in the polls, is linking Meek with Rep. Charlie Rangel (D-NY), the veteran congressman under investigation for multiple ethics violations. Greene recently called on Meek to return $5,500 in contributions he received from Rangel or donate the money to a charitable cause.

Greene is also bashing Meek for his ties to a real-estate developer named Dennis Stackhouse, who received a $72,000 earmark from Meek for a biopharmaceutical office park in Miami. But here’s the rub: The facility never got built. Stackhouse has also been accused of ripping off a county agency to the tune of $1 million for the same office park, PolitiFact reports. Stackhouse also paid Meek’s mother $90,000 for consulting and bought a Cadillac Escalade for her to drive. (Meek has said he didn’t know about his mother’s ties to Stackhouse.) Not surprisingly, Greene has repeatedly criticized Meek for the connection, saying he “is protecting the culture of corruption and bribery.”

Greene’s criticism comes after weeks of fending off accusations of flip-flopping about a visit to Cuba he made in his yacht, according to PolitiFact. First, Greene said he obtained a visa to go to Cuba and “visit the Jewish community.” Soon after, the candidate tweaked his story, claiming he’d gotten the visa as part of a humanitarian trip to Cuba through the Jewish Federation. Then, a Greene spokesman changed the story altogether, saying Greene hadn’t gone to Cuba for humanitarian works, PolitiFact finds, but because his yacht had suffered some hydraulic problems.

Deckhands on Greene’s yacht, meanwhile, said none of the above are true. Instead, they claim Greene’s trip to Cuba on his 145-foot-yacht was of the party-boat variety. One deckhand told the St. Petersburg Times, “Mr. Greene’s yacht is known to be a party yacht. When it went to Cuba, everybody talked about the vomit caked all over the sides from all the partying going on.” (Greene has denied the party boat story.)

Either way, with Meek and Greene trading blows daily, the race for the Democratic nomination in Florida has descended into one big and ugly attack spree. That doesn’t inspire much confidence in voters, at a time when Congress’ confidence ratings are already abysmal. For Democratic voters in Florida, their pick for the party’s nomination could mean choosing the least-worst candidate on August 24.