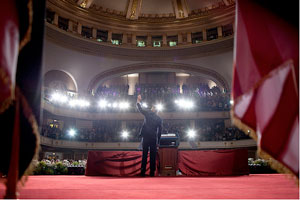 Well, it worked. Since late spring, the right wing has been harping on the Cordoba House project, a proposed Muslim cultural center (not a mosque; a cultural center with some worship space) that would occupy a building two blocks from Ground Zero in downtown Manhattan. Conservatives were certainly hoping the story would grab the public’s attention (and hurt liberals), but most national Democrats refrained from addressing the issue for most of the summer.

A few weeks ago, the right’s gambit seemed to have failed. The controversy was finally petering out: New York Mayor Michael Bloomberg gave an impassioned defense of the project and a local board allowed it to move forward. Unlike the Cambridge police vs. Henry Louis Gates incident, it seemed as if we’d make it through this fraught controversy without President Barack Obama feeling like he had to weigh in on local issues.

It may be hard to believe in the 24/7 news cycle, when every little cable news hit seems like a crisis the White House needs to respond to, but some manufactured controversies are better off ignored. You see, when the President speaks on an issue, the political stakes (and media attention) immediately skyrocket. By addressing an issue, the president gives his stamp of approval to the political debate on it. Unfortunately, those of us who were hoping that the White House would steer clear of this particularly stupid controversy saw our hopes dashed on Friday, when Obama offered an eloquent defense of the mosque project. Things got even worse the next day, when Obama rushed to “clarify” his remarks. “I was not commenting and I will not comment on the wisdom of making the decision to put a mosque there,” he said Saturday.

This is the sign of a White House that is lost. If you’re going to (unnecessarily) wade into an issue as fraught as the “mosque” controversy, you should really have your story straight the first time around. Politico‘s Ben Smith nailed it on Saturday:

The signal Obama sent with his rhetoric [Friday] wasn’t that he had chosen to make a trivial, legal point about the First Amendment. He chose to make headlines in support of the mosque project, and he won’t be able to walk them back now with this sprinkling of doubt. All he’ll do is frustrate some of the people who so eagerly welcomed his words [Friday] as a return to form. [emphasis added]

Obama chose to weigh in on this. God only knows why, if he was just going to back off his position the next day. He’s on the wrong side of the numbers: Americans are terrified of Muslims, and have opposed mosques in communities across the country (not just lower Manhattan). The GOP will undoubtedly make political hay out of the issue. John Boehner, the House minority leader, found Obama’s statement “deeply troubling,” and you can bet that Republicans will be pointing to it in campaign ads and stump speeches all the way through November.

But Obama chose to weigh in despite the risks. If you’re going to stand on principle, you should actually stand on principle. Instead, with his “clarification” on Saturday, Obama decided to endorse a right-wing frame of the issue. Saying that you believe that the organizers of the Corboda House project have the right to build where they wish isn’t saying anything at all. It’s simply stating the obvious. Of course they have the legal right to build. By drawing a contrast between the organizers’ legal rights and the “wisdom” of the project, Obama is leaving a huge opening for right-wingers. And here, right on cue, is RedState’s Erick Erickson, diving through it:

Matt Yglesias kind of gets this:

[O]ver the weekend some kind of hair-splitting distinction opened up between the idea of publicly and forcefully acknowledging the legal and constitutional right of the organizers to place their community center at 51 Park Place in Lower Manhattan and supporting construction of the mosque…. [W]hen it comes to matters of religion, I think this distinction gets a bit confusing…. [You] don’t expect Jews to stand up and applaud the construction of new Mormon temples, but I do expect them to acknowledge the right of Mormons to build temples and to stand up to demagogues who would try to abridge that right. And this is what we have going on in Lower Manhattan today. A completely legitimate undertaking that’s being stymied out of a mixture of geographical ignorance, a slanderous attribution of collective responsibility for 9/11 to all Muslims, and political opportunism. On the other side are people standing up for non-discrimination and religious freedom.

There’s no real need to introduce dozens of new layers of nuance into it.

But he misses the key point: Barack Obama is responsible for opening up that “hair splitting distinction” and introducing (or at least endorsing) all those useless “new layers of nuance.” Anyway, I’ll leave you with this, from Josh Barro at NRO:

And this brings us to why I disagree not only with those who would use the power of government to stop the mosque, but also with the [National Review] editors and others who urge private anti-mosque action. In general, my presumption is that it’s OK for people to build what they want on their property, with the burden on opponents to show why that’s such a bad thing. The proper question is not “Why here?” but “Why not here?”