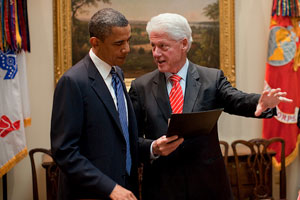 Last week, I attended a meeting at the Treasury with senior administration officials.

The ground rules prohibited direct quotes or identifying the senior administration officials in question. But I can tell you who else was there: Politico‘s Mike Allen, Huffington Post‘s Shahien Nasiripour and Richard (RJ) Eskow, the American Prospect‘s Tim Fernholz, the Washington Post‘s Ezra Klein, Reuters’ Felix Salmon, and the Atlantic‘s Derek Thompson. ThinkProgress’ Matt Yglesias was supposed to be there but a Secret Service snafu left him stuck outside for the duration.

One of the many problems with these sorts of deep-background briefings is that not even the participants can agree on what happened—or what should have happened. On Thursday, Fernholz complained that Allen’s Playbook writeup of the meeting was inaccurate. (As Yglesias notes, the administration officials in question should have spoken on the record.) Salmon, comparing Wednesday’s meeting to one earlier in the week with policy wonks, gets close to the heart of some participants’ complaints:

I half understand why Treasury makes the distinction between the two types of bloggers, but Ezra and I both felt a little jealous that we had to compete with Mike Allen asking about politics when we could have listened to a detailed and wonky discussion between Steve Waldman and Tim Geithner on the subject of bailout incentives.

And Brad DeLong (who wasn’t at the meeting but knows many of the participants) makes the complaint explicit:

Apparently—according to other participants, who put it much much more strongly than Felix does in public—[Mike Allen] did not understand what was said, misrepresented what he did understand, and dragged the conversation away from useful substance into pointless and uninformed horse-race speculation.

I actually found the political questions useful and the administration official’s responses deeply revealing. I had gone in to the meeting expecting much more of an aggressive, rough-and-tumble, and frankly political attitude from the reporters. But I shouldn’t have—most of the participants are policy wonks at heart, and they (for the most part) asked policy wonk questions and got wonky answers from a wonky administration official. Those questions and answers were interesting, but I’m not sure exactly what the point was. As Derek Thompson notes here, the entire conversation was infused with Treasury’s frustration with the political problems it is up against. You would think there would be more questions about that—and who’s to blame. After all, policies aren’t worth much if you can’t enact them.

The meeting took place the same day that the AP released a poll showing the public’s approval of Obama’s management of the economy at a record-low 41 percent. I asked one senior administration official what the Obama team could have done differently—in policy or messaging—to alter the political fortunes of the stimulus and the economic recovery plan. The official essentially blew off the question. Perhaps I should have been more specific. Thompson regrets not asking whether a higher initial “bid” for stimulus—say $1.2 billion—would have worked. I could have asked about toughening rhetoric against the banks. In any case, President Obama has always made a big deal out of admitting mistakes (supposedly as a contrast with Bush). But no one has said what went wrong with the recovery plan—either in execution or in convincing the country it was a good idea. (The two issues are connected, obviously.) Instead, we get “look on the bright side” stuff like Tim Geithner’s “Welcome to the Recovery” op-ed, followed by the almost comically poor excuse that Treasury did not, in fact, write the Times’ headline. There are plenty of folks in the administration willing to put a good spin on the economy. But there’s no one who seems to be willing to take—or even lay—blame for it.

Later, Allen asked one senior administration official what the official’s concerns were around the November midterm elections. The response was classic Obama administration—a disavowal of the very idea of talking politics at all. It wasn’t the first time an official suggested something along those lines in this particular meeting, either. (The irony of disavowing politics at a deep background blogger meeting presumably intended to influence politics was not lost on me.) Now, given the administration’s obvious frustrations with not being able to enact their policies, the official should have immediately launched into an explanation of why it was important for Democrats to hold on to Congress. Instead, Allen had to press the official to even get an acknowledgement that there would be a difference between Speaker Pelosi and Speaker Boehner.

This was followed, a few minutes later, by an incredibly bizarre and revealing anecdote. The administration official was trying to argue that it’s hard to tell what Republicans might want to do in November. As evidence, the official recounted a visit he made to a senior Republican the day that Scott Brown won Ted Kennedy’s Senate seat in Massachusetts. The Republican told the official that the GOP really liked the position it was in, was planning to fight the administration on everything, and saw this as a successful strategy. The administration official told us that the plan worked great for the Republicans and allowed them to paint the president as vulnerable and left-wing.

Most reasonable people might think the experience described in that anecdote, combined with all the evidence of the Clinton presidency, the Bush debacle, and the past two years, would suggest to Obama administration officials that the GOP isn’t particularly interested in working with them. But the administration official in question here thought that the story highlighted the impossibility of knowing what the GOP would do if it was running Congress again. There just isn’t enough evidence to know for sure. And no, the official was not being sarcastic.

Here’s why this matters. As Greg Sargent notes (in response to this misguided Politico piece), frustration with the administration’s perennially optimistic attitude toward the GOP is at the heart of the left’s critique of Obama. Months of time were wasted in the futile pursuit of Chuck Grassley and Olympia Snowe’s votes on health care reform. The Republicans have blocked everything the Treasury might want to do to improve the economy. And now the Dems can’t even get GOP votes for a small business package that the US Chamber of Commerce supports. The administration official acknowledged that the purpose and effect of the GOP strategy over the past two years has been to weaken the president and make him look like a leftist. Yet no one will blame the GOP, let alone admit that the administration made mistakes. The Obama team still holds out hope that a kumbayah moment is on the way.

It’s hard to look at the Obama administration’s continued fetishization of bipartisanship and not blame the man at the top. Here, via Ben Grossman-Cohen, is Obama himself, writing on Daily Kos in 2005:

According to the storyline that drives many advocacy groups and Democratic activists—a storyline often reflected in comments on this blog—we are up against a sharply partisan, radically conservative, take-no-prisoners Republican party. They have beaten us twice by energizing their base with red meat rhetoric and single-minded devotion and discipline to their agenda. In order to beat them, it is necessary for Democrats to get some backbone, give as good as they get, brook no compromise, drive out Democrats who are interested in “appeasing” the right wing, and enforce a more clearly progressive agenda. The country, finally knowing what we stand for and seeing a sharp contrast, will rally to our side and thereby usher in a new progressive era.

I think this perspective misreads the American people.

I’m not sure the part about “driving out Democrats who are interested in ‘appeasing’ the right wing” is fair, but I think Obama’s is a reasonably accurate description of what the vast majority of the Left thinks about the Democrats. In my experience, it’s also how a lot of independents and moderate Republicans see the Democrats: weak, cowardly, and bad at politics. Obama and his people clearly disagree with that assessment. But how anyone can look at today’s GOP and think that “sharply partisan, radically conservative, [and] take-no-prisoners” is an inaccurate description just boggles my mind. That anyone can think that it’s somehow hard to tell how the GOP will behave if they win back Congress is just stunning.

Look: politics matters—it’s what makes policy possible. If members of the Obama administration are going to continue to pretend they’re post-political and continue to live in their “congressional Republicans will come around” dream world, they should be challenged on it. I’m glad Mike Allen did that.