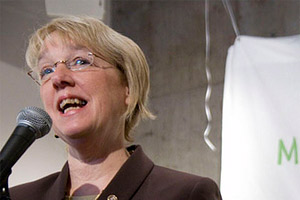 Out in Washington, the state ran its first “top two,” or “jungle,” primary, in which all candidates, regardless of party, appeared on the same ballot. The two highest vote-getters then move on to the general election in November. (That means Democrats can vote for Republicans, and vice versa.) Think of it as a pre-election, with the state’s top Dems and GOPers getting a preview of how they stack up against one another.

Washington’s 8th district met expectations, with Republican Dave Reichert and Democrat Suzan DelBene coming in first and second, respectively. Though Hotline-on-Call says not to read too much into the results:

While Reichert’s impressive 48-26 percent performance over DelBene in the primary was certainly impressive, don’t read too much into that for the general election. DelBene did not focus heavily on the primary, and instead spent most of the year building up an impressive warchest; She has $900K in the bank compared to Reichert’s $1M. The Dem-leaning nature of this CD—and DelBene’s strong bank account—means Reichert should be in for another hard-fought contest. Although he certainly has the edge at this point over the unknown DelBene.

Down in the state’s 3rd district, in the race to replace retiring Democrat Brian Baird, Republican Jaime Herrera came in second to Democrat Denny Heck, pulling in 27 percent of the vote to Heck’s 31 percent. Bolstered by his grassroots base and endorsement from state Attorney General Rob McKenna, ex-Bush aide David Castillo remained hopeful despite a major funding gap with Herrera, one of the National Republican Congressional Committee’s Young Guns. In a field cleared of serious Democratic opposition, Heck ran relatively unchallenged and was able to avoid spending lavishly on the primary. Hererra’s prize for coming in second, then, is a dance with a with a well-funded opponent this fall.

The thinking goes that with Murray a shoe-in to make the general, a portion of her base will either not participate or perhaps vote for one of Rossi’s top GOP competitors. Either way, a vote total below 45 percent could set off some alarms within the party. The last poll in the race, taken in late July by the Democratic firm Public Policy Polling, found Murray at 47 percent and the three Republicans totaling 47 percent (with Rossi taking 33 percent)

For full results on all the state’s races, click here.

And in Wyoming, in the race to replace Democratic Governor Dave Freudenthal, the Republican gubernatorial primary saw ex-US Attorney Matt Mead eke out a win over freshly anointed “mama grizzly” Rita Meyer and ex-state Rep. Ron Micheli. Mead took about 29 percent of the vote to Meyer and Micheli’s 28 percent and 26 percent, respectively. The race was over when Meyer called to concede to Mead late on Tuesday. Polls at the end of July suggesting that this would be a close race proved prescient. Over on the Dem side, state party chair Leslie Peterson, a late-comer to the race, came out ahead of pilot Pete Gosar. Here are the Wyoming’s full results.