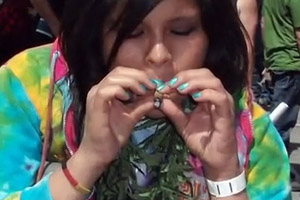 At precisely 4:20 PM last Saturday, proponents and foes of legalizing marijuana in California were scheduled to hold a debate at the International Cannabis and Hemp Expo inside the Cow Palace arena just outside San Francisco. Things didn’t go as planned. “The whole debate thing was just a disaster,” organizer Susan Soares* later told me. For one thing, the debate’s starting time posed a logistical problem. While 20 past 4 is stoner culture’s designated hour to light up, the debate room was not within the official pot smoking area where anyone with a medical marijuana card—which meant just about everybody in attendance—could freely sample marijuana-infused fruit smoothies, lollipops, and beef jerky, in addition to joints proffered by busty cigarette girls in tight-fitting nurses outfits.

But no matter: While everyone was still partaking, Dennis Peron, a fervent medical marijuana activist who opposes legalization on arcane legal grounds, held the stage hostage for several minutes in an effort to be added to the speakers list. The actual debate didn’t start until 4:48, at which point the crowd of red-eyed pot growers, suppliers, and smokers was standing-room only.

At the center of the heated showdown was Proposition 19, a November ballot initiative that would decriminalize posession of small amounts of weed for recreational use. As an emcee tried to introduce the first speaker, Prop. 19 architect Richard Lee, he was overwhelmed by boos and jeers. Some pot farmers, doctors, and pot-dispensary owners fear that legalizing the drug will eliminate their jobs or expose them to competition from industrial-scale growers. “I need everyone in the crowd to act like an adult. Right now!” the emcee yelled fruitlessly. He then asked “the adults” in the crowd to raise their hands. The room grew quieter.

But not for long. Lee, the founder of Oaksterdam University, a marijuana cultivation school in Oakland (“Quality traning for the cannibis industry”), wore aviator sunglasses that made him look like a fighter pilot about to strafe the crowd. “We’re all for legalization here, right?” he began, mildly enough, before exploding: “We’re all for fucking legalization! So fuck these guys who want to keep fucking up out of Mexico!” He went on, a bit cryptically, “Thirty thousand people are dead! We’ve got to move to legalization, it’s that simple. This is the best we can do right now.” Applause and cheers clashed with cries of “You suck!”

“I’m hiding behind you if a fight breaks out,” Derek Peterson, a Prop. 19 supporter and co-owner of weGrow, an Oakland hydroponics store, told me. “I’m too stoned to throw punches.” I pointed out that pot smokers are supposed to be peaceful. “I’m telling you, man, when economics gets involved, it changes everything,” Peterson said. A year from now, he predicted, the pot business “is gonna be as ruthless as Wall Street.”

The No on 19 side was represented by George Mull, an attorney for cannabis companies. He agreed that “we are all in favor of legalization” but argued that Prop. 19 is so brazen that it could provoke the federal government to bust California’s entire marijuana industry. “I don’t know which ones of you want to step up and risk not going home to your families for the next 20 years,” he said. “But I never tell my clients to and I’d never wish it on any one of you.”

Next up, Chris Conrad, the publisher of West Coast Leaf, argued that everyone should stop being paranoid and vote yes on legalization. He was loudly booed. “Oh wow, listen to the little children crying!” Conrad sneered as he twitched his arms like a toddler throwing a temper tantrum. “They are so afraid to hear the truth.” “Prop. 19 kicks ass over Prop. 215,” he said, referring to the 1996 voter initiative that legalized medical marijuana. “If you are so stupid to vote no on Prop. 19, you are taking that message around the world.”

Nobody in the hemp expo crowd seemed upset when Bishop Ron Allen, head of the International Faith Based Coalition and the final No on 19 speaker, cited a study that legalizing pot in California would increase usage by 100 to 150 percent. But he soon alienated both sides of the crowd when he equated pot dealers with snake handlers. The decision to smoke pot, he explained, is like saying, “So why don’t we go get a rattlesnake or a cobra?”

“You’re the rattlesnake!” chanted Steve DeAngelo, the founder of the Harborside Health Center, an Oakland medical marijuana dispensary. Several others joined him. It might have been the only thing said during the entire debate that everyone seemed to agree on.

*After this story was published, Soares disavowed this quote. “That’s not something I want to be quoted as saying,” she said, “because at least everybody was expressing their opinions.”