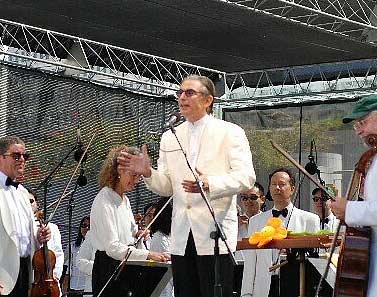 Tilson Thomas leads a past year's concert. Photo: <a href="http://www.flickr.com/photos/ari/">Steve Rhodes</a> under a CC license.

That was a treat! How often can you leave work on your lunch break, grab a burrito, and plop your ass down 20 feet from a world-renowned symphony orchestra for a free concert led by this guy.

The San Francisco Symphony, fresh from a round of festivals in Switzerland and Italy, played an outdoor freebie for their appreciative hometown rabble Friday afternoon, the players laughing as nearby car horns and sirens worked their way into the refrains. It was delightful show, ignoring the program’s admonition that “video or audio recording of today’s performance is strictly prohibited” (Please! This is the iPhone generation.) Superconductor Michael Tilson Thomas took the helm, launching his talented crew of waiters (or so they appeared in their white tuxedoes) into the Roman Carnival Overture (Opus 9) by Berlioz, followed by the First Movement (Allegro con brio) from Beethoven’s Symphony No. 5 in C minor, Opus 67. (See rant below.)

Wagner was next, his stormy overture to The Flying Dutchman well rendered, but the real crowd pleaser came courtesy of a French composer I’d never heard of—a Wagner admirer named Delibes, whose raucous and intellectually twisty “Cortege de Bacchus” (from the ballet Sylvia) promised what Tilson Thomas called “the good bad note.” Which got me listing for one such note; I was rewarded with many.

The symphony’s luchtime finale was also the finale (Allegro con fuoco) from Tchaikovsky’s Symphony No. 4 in F minor, Opus 36. Which, by no fault of the players, seemed a tad forgettable, even though it concludes in typical triumphal fashion. More from this Delibes fellow!

The fact that I clearly have little classical breadth brings me to the issue of nomenclature. We’re all familiar with the abovementioned Beethoven piece: Da-da-da-duuuuuum! … Ta-ta-ta-tuuuuuuuum! The symphony played it movingly, although not so movingly as to erase this from my permanent consciousness. But let me ask readers: Did you recognize this iconic work when I mentioned its name? Yeah, didn’t think so.

Hence my theory on why classical has so declined in popularity: Bad marketing! A piece needs something people can remember it by so they can tell their friends about it—memorable names to compete with everything from “Blowin’ in the Wind” to “Poker Face.”

I actually grew up playing classical piano, yet to this day it’s only the named pieces I can readily recall: Bach’s Goldberg Variations and Brandenburg Concertos, Beethoven’s Pathetique and Moonlight sonatas, his Tempest (wonderful!), Holst’s The Planets, Vivaldi’s ridiculously overplayed Le Quattro Stagioni. (The Four Seasons, fool!) And—god help us—stuff like “Fur Elise” and “Pachelbel’s Canon”, the latter so egregiously overexposed that when you type “pache…” into Google, one of the auto-search terms that awaits you is “Pachelbel rant.” Which, as it happens, is a video so awesome I’m going to force you to watch it:

The point is, we hear too much of these pieces, and not enough of other deserving ones, in large part because nobody can remember a name like the Brahams Cello Sonata in F (Opus 99) or Handel’s Organ Concerto Opus 7, No. 1. It’s sort of analogous with genetics, another subject I used to study: Scientists give human genes unpronounceable names like LDHC and CYP1A1, while those who study fruit flies give fly genes memorable monikers like “18wheeler” (whose mutant larvae have 18 stripes), “cheap date” (flies with mutations in this gene are highly sensitive to alcohol), and “clown” (red and white eyes).

Look, I know what you’re going to say. But so what if most of these master composers have been dead for hundreds of years! I mean, have these people no creativity!