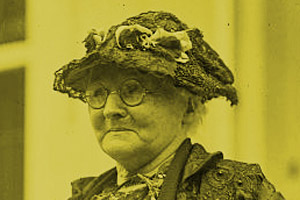 Original image from Library of Congress

Last month, I traveled to the Coal River Valley, deep in the mountains of West Virginia. Mentioning that you work for Mother Jones doesn’t always open doors, but when I drove up one steep dirt road to a tidy mobile home, I received a surprisingly warm reception. Paul Lucas said my employer’s namesake was familiar. “I remember that name from that video,” he told me. “Mother Jones speaking before all the men.”

Lucas had seen the video in a class he took in February to become state-certified as a coal mining apprentice, setting himself up to be the third generation in his family to work the mines. But the video’s reference to the original Mother Jones didn’t mention the eponymous magazine that Lucas had sometimes seen. He’d never realized the connection.

“Was she involved with Blair Mountain?” he asked. I confessed that I didn’t know.

“I believe she was involved with old Blair Mountain,” Lucas went on.

“It had a lot to do with Cabin Creek and Paint Creek,” added his father, Jim, a miner for the fiercely anti-union Massey Energy. Though I knew the basics about Mother Jones and her career as a fiery orator and labor organizer, I had no idea what they were talking about. So I just sat back on the couch and listened.

The Battle of Blair Mountain, I learned, was the largest armed confrontation in America since the Civil War. In August 1921, some 10,000 West Virginia coal miners picked up their Winchesters and marched against the powerful mine owners who ran the state like a fiefdom. “These miners weren’t even getting paid American currency,” Paul Lucas explained. They earned company scrip and were forced into debt spending it on rent and food at the company store. “I definitely think that the union was needed back in the Mother Jones days.”

White-haired, matronly, and fiercely socialist, Mary Harris “Mother” Jones helped turn the fledgling United Mine Workers (UMW) into the nation’s most powerful labor union. “Pray for the dead and fight like hell for the living,” her famous battle cry, was both a salve and a call to arms. In a 1912 speech to striking miners, she warned West Virginia’s governor that unless he called off the guards who’d killed workers at the Paint Creek and Cabin Creek mines, “there is going to be one hell of a lot of bloodletting.” She later held up the blood-soaked coat of a wounded guard and proclaimed, “This is the first time I ever saw a goddamned mine guard’s coat decorated to suit me.”

The Paint Creek and Cabin Creek mine owners eventually agreed to the strikers’ demands, but the militancy that Mother Jones had encouraged went beyond her control. When coal production began to soar in non-union Logan County, an army of pro-union miners gathered near Charleston and prepared to march across Blair Mountain to free jailed union organizers. Mother Jones tried to call them off by spreading a lie that President Warren Harding would intervene on their behalf, but the ruse was exposed and she was pushed aside as a traitor to the cause. “Them union guys marched out,” Paul Lucas told me, “and got met by a company with a machine gun nest.” Between 20 and 50 miners are thought to have died; a precise death toll was never established.

It was the last time that Mother Jones worked in West Virginia, yet her legacy has become synonymous with the UMW’s. She laid the foundation for the union to win the first contracts in the country that required eight-hour workdays, health benefits, and pensions. “She was invaluable, irreplaceable,” says UMW spokesman Phil Smith. “She was able to motivate miners to take collective action when in some cases the leadership of the union was not. She was able to motivate the families of miners to support the men who were either on strike or trying to organize, when nobody else could. And she didn’t just do it in West Virginia, she did it all over the country.”

Yet for the Lucases and other Massey miners, the UMW of the Mother Jones era now seems like a distant dream. Today the union represents just a third of coal miners in the US, down from more than 90 percent in the 1950s. It’s the target of a union-busting campaign by Massey CEO Don Blankenship, a self-made millionaire who grew up poor in coal country. Massey is known for buying union mines, firing their workers, and rehiring employees who won’t unionize. Working at a non-union Massey mine now pays better than being at a union mine, though Massey workers don’t qualify for pensions or the same top-rated health benefits.

In July, Jim Lucas, who is nearing retirement, was injured when some rock broke loose from the roof of a mine and fell on his leg. As he sat in his living room, a machine periodically drained fluids from his infected calf. He was working at the Upper Big Branch mine in April, when an explosion killed 29 workers, the worst US mine accident since 1970. But he doesn’t blame the coal company. “Regardless of what anyone says, I believe that sometimes there are just extenuating circumstances, and things happen that are really just beyond men’s control,” he said. A part-time minister known as “Preacher” to younger workers, Lucas sees God much as Mother Jones saw the union—as his men’s ultimate counselor and protector. Knowing that her husband will share the Gospel with other miners if he’s ever trapped in the mine is a comfort to his wife, Debbie. “If that’s the way the Lord takes him,” she said, “we’ll be okay.”

His son Paul also had lost faith in the power of the union, but he hadn’t forsaken it altogether. “I’m more non-union than I am union,” he said, “but I also worry what would happen in this state if there wasn’t a union. To be competitive, Don Blankenship has to pay what he does. But if he is successful in getting rid of the union completely in this state, what is gonna happen to coal wages?”