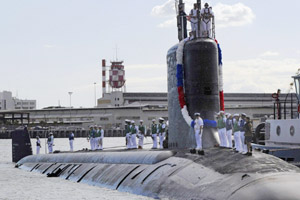 Of all the complicated gadgets in the Pentagon’s arsenal, a nuclear submarine is one that probably shouldn’t be built on the cheap. Yet according to military analysts, that’s precisely what the Navy and two defense contractors did with a series of $2 billion attack subs, and now they’re literally dropping chunks of their protective skins into the briny deep.

The problem afflicts the Navy’s growing fleet of Virginia-class subs, high-tech boats longer than a football field and armed with a dozen Tomahawk cruise missles. The subs are coated with a “special hull treatment,” urethane tiles that are supposed to make them super-stealthy, reducing their noise underwater and absorbing sonar impulses. As these photographs show, and as the Pentagon’s top weapons inspector has reported, the tiles have been peeling off of the subs while they’re at sea, often in large sections. So far, missing tiles have been documented on four of the Navy’s seven Virginia-class subs, the first of which launched in 2003.

The disappearing tiles won’t sink the subs, but they could seriously impede their primary mission—to run silent and run deep without being detected. “When pieces of the hull coating fall off, the sub gets noisier because it interrupts the water flow over the hull,” Norman Polmar, a defense analyst who literally wrote the book on Navy subs, explained to the Newport News, Virginia, Daily Press. “When you put more noise in the water, you’re easier to detect.” A blogger at Halibut Hangar, which discusses submarine systems, puts it more bluntly: “The submarine platform may purr like a kitten when delivered and roar like a lion after a subsystem failure.”

How could one of the world’s most advanced pieces of military machinery be laid low by something so basic? Officers and contractors may have been cutting corners when the subs were built, says Craig Hooper, a San Francisco-based security strategist who’s been tracking the Virginia-class woes on his blog Next Navy. “The demand to build this submarine in a fast, cost-effective way led them to skip some steps that should have been in the process,” he says. “They’ve got this beautiful, fantastic vessel, and they just covered it in a Wal-Mart tarp.”

In 2004, the Navy estimated that it needed 55 nuclear subs to keep up with the rest of the world’s navies (never mind that the costly and top-secret Cold War battle for underseas supremacy was well over). To meet that ambitious goal, it kicked up production and broke with its long-standing practice of using one contractor per boat by splitting the work on its new Virginia-class subs between two shipbuilders, Northrop Grumman’s yard in Newport News and General Dynamics’ Electric Boat Co. in Groton, Connecticut. It also put a premium on building quickly and inexpensively, pressing for a goal of “two for four in twelve“: putting two subs into service every year, for $4 billion a year, every year until 2012.

Members of Congress and Navy brass have touted the Virginia program as a paragon of cost-effectiveness. But according to a Congressional Research Service report (PDF) on the program, the time and financial pressure put on the shipbuilders may have had unintended consequences, such as “production inefficiencies and higher costs.” And in a recent memo (PDF), J. Michael Gilmore, the Pentagon’s director of operational test and evaluation, has criticized the Virginia-class subs for “multiple ‘fail to sail’ issues.” Gilmore, the nation’s top weapons inspector, cited the program as an example of widespread shoddy weapons manufacturing, warning that unreliable equipment “can essentially render weapons useless.”

The Navy has been slow to say much about the problem. When it has, it’s contradicted itself. Sailors who work in the office of the Virginia program initially told media that the hull-splitting issue came to light in 2006; they later claimed that it first popped up in 2007, immediately after a brand-new sub was delivered with its skin peeling. The Navy also asserts that only three subs—the USS Virginia, Texas, and North Carolina—have succumbed to hull decay. But Hooper brought the service’s attention to its own public affairs photos, which show damage on the USS Hawaii as well. In response, the Navy said that the peeling tiles were part of normal wear and tear. Hooper says the photos of the Hawaii, which was peeling after a routine 10-day voyage, prove otherwise. “The program office is saying this happens over years. It doesn’t.”

Asked for comment, Northrop and General Dynamics—two of the military’s largest vendors—both referred questions to the Navy.

Military analyst Hooper doubts the Navy can be trusted to face up to the seriousness of the problem. “If the Virginia-class program office cannot muster the cojones to even recognize a problem that is staring ’em in the face, how in the heck is the rest of Big Navy going to muster the will to get the problem solved?” he asks. “This lack of intestinal fortitude will, in a shooting war, get our sailors killed.”