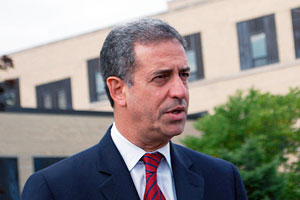 Kevin Drum beats me to the punch and excerpts the key portion of President Obama’s long interview in Rolling Stone:

It is inexcusable for any Democrat or progressive right now to stand on the sidelines in this midterm election. There may be complaints about us not having gotten certain things done, not fast enough, making certain legislative compromises. But right now, we’ve got a choice between a Republican Party that has moved to the right of George Bush and is looking to lock in the same policies that got us into these disasters in the first place, versus an administration that, with some admitted warts, has been the most successful administration in a generation in moving progressive agendas forward.

….If we want the kind of country that respects civil rights and civil liberties, we’d better fight in this election. And right now, we are getting outspent eight to one by these 527s that the Roberts court says can spend with impunity without disclosing where their money’s coming from. In every single one of these congressional districts, you are seeing these independent organizations outspend political parties and the candidates by, as I said, factors of four to one, five to one, eight to one, 10 to one.

We have to get folks off the sidelines. People need to shake off this lethargy, people need to buck up. Bringing about change is hard — that’s what I said during the campaign. It has been hard, and we’ve got some lumps to show for it. But if people now want to take their ball and go home, that tells me folks weren’t serious in the first place.

If you’re serious, now’s exactly the time that people have to step up.

Kevin, being the “mushy sellout” he is, agrees with Obama. But he adds a caveat:

If you’re, say, Glenn Greenwald, I wouldn’t expect you to buy Obama’s defense at all. All of us have multiple interests, but if your primary concern is with civil liberties and the national security state, then the problem isn’t that Obama hasn’t done enough, it’s that his policies have been actively damaging. There’s just no reason why you should be especially excited about either his administration or the continuation of the Democratic Party in power.

That’s all true, but it’s not an excuse for people to be complacent. Sure, civil libertarians like Greenwald shouldn’t buy Obama’s defense of his administration’s continued failings on civil liberties. But people still have a responsibility to analyze the candidates in their district and decide which one would be better on the issues that are important to them. Greenwald may not be enthusiastic about Obama, or about most Congressional Democrats. But I strongly suspect that if Greenwald lived in Wisconsin, he’d vote for Sen. Russ Feingold, one of the few true civil libertarians in Congress.

On civil liberties, the difference between Feingold and his challenger is immense. But even a small difference on the issues that are most important to you is probably worth voting on. If two candidates really are exactly equally bad on your issues, not voting or casting a protest vote become reasonable options. But most of the time, a little bit of research can help you determine which candidate would be less-bad on your issues. At the very least, civil libertarians should take a few minutes to investigate the congressional candidates in their district. In other words, you don’t have to like Barack Obama or be excited about Democrats to vote for Russ Feingold.