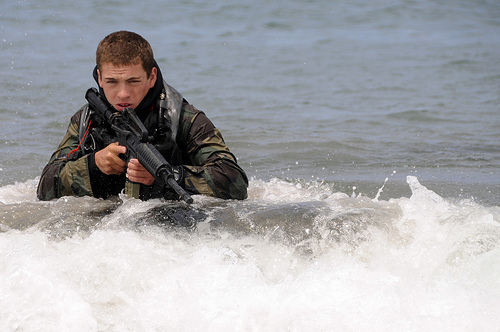 Last week, we learned that a US-led team of commandos in Afghanistan killed the British aid worker they’d been tasked with rescuing. Linda Norgrove, a Scottish volunteer taken in Kunar province, had actually managed to flee her captors during the rescue attempt when she was blown up by a fragmentation grenade tossed her way by a member of SEAL Team Six. After the attempt, the Navy’s elite operators acknowledged what they’d done, and US and British authorities vowed a full investigation, with Afghanistan General David Petraeus even apologizing to Norgrove’s family (who expressed thanks for the military’s forthrightness).

There’s much to be worried about here. Right-wing politicians and milbloggers have been sniping US generals in Afghanistan for enforcing strict rules of engagement, moaning that constraints on the use of force mean American troops will be second-guessed for the killing they do in war. They’re already whining about the opprobrium being heaped on the Norgrove mission. They’re full of malarky.

But this isn’t about tactics, or the judgment warriors exercise in war. It’s about a cover-up.

The initial story told by the military about Norgrove’s killing was wrong: The sailor who tossed that grenade at her carefully omitted that information from his after-action report. Later, his commander, reviewing tapes of the raid, saw something tossed, followed by a flash. Then he went to the mission crew and asked them point blank: Who threw a grenade? That’s when the sailor finally fessed up.

We trust these men—and they are all men—to do so much. Yet one of them, a trained professional hunter, scout, rescuer, and—yes—killer, felt more comfortable lying about his lethal actions in battle than owning up to them. Which begs the question: What else could men like him feel comfortable concealing?

As one expert told Agence-France Presse:

“It will reflect poorly on the integrity of everyone in the field if he (the SEAL) lied,” Jim Hanson, a retired US Special Operations Forces master sergeant, said in an interview.

“It looks bad, there’s no upside to that. It makes you look like you’re trying to cover something up and it causes a lot of questions.”

This isn’t a start-to-finish case of war crimes, as we’ve seen recently in Iraq and Afghanistan—I’m no naif, and I know that among the class of warriors who are trained and asked to kill, there are an unfortunate number of psychopaths and ideologues willing to do dirty deeds and conceal them. But we’ve now reached a point in our long wars where service members who make fatal mistakes—even possibly honest ones—resort to dishonesty, rather than courage of convictions. It’s not only disturbing from a moral or professional point of view: It’s counterproductive in a “hearts and minds” counterinsurgent campaign.

I’ve known and served with some top-notch, conscientious, human-rights-focused service members, some of them Navy SEALs. (Yes, progressive reader, they do exist, and in increasing numbers.) And in the Norgrove case, credit is due to the military on several counts. First, the public might never have known the circumstances of Norgrove’s death if the US and UK hadn’t informed the London-based Guardian newspaper that they were launching an inquiry into the killing. Second, that SEAL commander who extracted the truth from his men deserves a medal. It’s an example of the baseline moral courage all service members should have.

But still. Lethality plus mendacity is a toxic formula, and the military will have to do a lot more than “find facts” to keep the poison at bay. It’s going to need some greater accountability from its trigger-pullers. Fast.