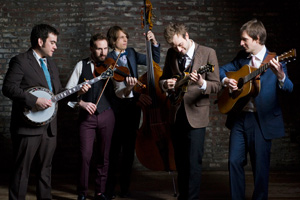 Framed by the woods of Golden Gate Park during San Francisco’s Hardly Strictly Bluegrass Festival, mandolin virtuoso Chris Thile takes the stage alongside his band, Punch Brothers, and booming-voiced roots-rocker T-Bone Burnett. The group commences its string-laden crawl, a tense predecessor of the explosive plucking that will soon ensue. The rest of his mates stay still during the intro, but Thile can’t take it any longer. He begins to prowl around like Puck on a midnight ramble, his body gyrating with his mandolin notes and a mischievous smile making its way across his face.

Though he’s approaching 30, Thile’s constant motion reminds me of an inexhaustible puppy. He named his band after the Mark Twain story “Punch, Brothers, Punch,” sings about seafaring and barroom carousal, and spends late nights with bandmates throwing back drinks in Brooklyn. His latest album, Antifogmatic, takes its title from a 19th century drink meant to stave off the effects of stormy weather. As his tune “Rye Whiskey” might suggest, single-barrel whiskey is Thile’s first choice. “I love it. I really do. That song is completely true, in all ways,” he tells me earnestly. On top of all their revelry, what the Punch Brothers are doing musically blows the pants off most of their contemporaries. Thile and his Brothers have bridged classical and bluegrass traditions, melded them with pop-infused songwriting, and come up with a sound both experimental and tightly woven.

“I think the main difference, off the top of my head, is in our approach to the texture of the string band,” Thile explains when I ask about Punch Brothers’ radical style. “Not that we don’t have great role models in the stretching of the texture of the bluegrass ensemble.” (Among others, Thile cites Béla Fleck, Sam Bush, and Edgar Meyer). “But to us, our instruments are not really tied any more to American folk of the ’40s, ’50s, and ’60s than they are to anything happening today.”

Thile picked up the mandolin at age five and recorded his first album at 13. He’s traveled the world on sold-out concert tours, and recorded with the likes of Joshua Bell, Yo-Yo Ma, and Renee Fleming. After struggling through a messy divorce in 2004 and breaking off from his hit band, Nickel Creek, two years later, he needed new energy. For his new group, he assembled Chris Eldridge, Greg Garrison (since replaced by Paul Kowert), Noam Pikelny, and Gabe Witcher. They soon released “The Blind Leading the Blind,” a four-part movement composed by Thile to deal with the bitter remnants of his breakup. Though tortured, it was cathartic, and proved to Thile that what had once seemed impossible on bluegrass instruments could be achieved. In a clip from an upcoming documentary about Punch Brothers, How to Grow a Band, Thile is seen on the phone discussing an upcoming show: “It says, ‘Tonight, Hot Bluegrass Show,’ and we’re going to play a 40-minute string quintet. Awesome.”

That the Punch Brothers don’t always conform to genre irritates some people within the community. “A lot of people get angry when they hear us referred to as bluegrass,” Thile says. “Because what we do to bluegrass music would be like going, ‘Oh, you know the Mona Lisa over here? I’m going to make a couple changes.'” He gets up and mimes the painting motion. “And they’d be like, ‘Nooo!’ But I think that they don’t understand: To us, bluegrass is just a part of the puzzle.”

One of Thile’s favorites, Hungarian composer Béla Bartók, also got flack for stepping out of the conservatory and drawing inspiration from folk music. “He went back into the hills and just studied all of that to break free of the rigid, European concept of what harmony is,” Thile explains. “No knock on conservatories, I mean, Jesus Christ, some of the best music ever made was made under that umbrella.”

Better to throw genre out the window and get down to the music that made Thile go wild. “Really the greatest music I’ve ever heard I’ve hated the first time I heard it,” he tells me. “It’s been abrasive at first; it’s been something that challenged me in a way that I wasn’t fully comfortable with.” Thile mentions Radiohead’s Kid A about five times during our chat, classical composers like Bartók and Thomas Addis, and even Sufjan Stevens’ new EP, All Delighted People. “We love music, and when it’s good we flip,” he says. “And we want to get to the core of why it’s good.”

For Thile, getting to that core requires focus. “I can’t listen to music while I’m doing something else. Well, unless I’m working out. But I, like, fall off the treadmill all the time if I’m listening to something that I like too much,” he says. “My life conforms to music, not the other way around.”

On stage at Hardly Strictly, Punch Brothers wowed the audience with their picking skills and giddy energy. At one point, Elvis Costello joined them on stage for a Beatles cover. When Costello proved himself a talented whistler, Thile looked over at Punch Brother Gabe Witcher with raised eyebrows and a surprised grin. With the expression of a merry schoolboy, his fingers masterfully gliding up and down his instrument, Thile seemed at home and in awe in his musical playground.