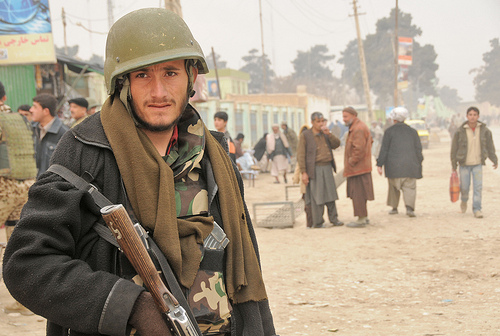 [Read more MoJo coverage of the Afghanistan War anniversary in “How to Lose a War in Nine Years“: Two experts explain why US opinion turned so dramatically against the campaign.]

Nine years ago today, George W. Bush introduced the world to Operation Enduring Freedom, and the world’s been enduring it ever since. You might be left with the impression that there’s not much new to say about the Afghanistan War, especially if you’ve relied on the mainstream media to tell the story. The Atlantic Wire’s resident conflict reporter, Max Fisher, took justifiable issue with the AP’s by-the-numbers reporting Wednesday, summing the problem up in a tweet: “If you have to use a photo from 2006 to fit your narrative about Afghanistan’s status in 2010, its time to go home.”

But since 9/11, milbloggers—service members, journalists, and researchers who hold more than a passing interest in America’s expeditions abroad—have offered a less monolithic view of the violence. They come from all across the political spectrum. Some still champion the war; some never did and still don’t. They don’t have much to say about the OEF anniversary itself. But taken together, their recent posts offer a telling inside look at a decade-long conflict that’s changed America forever, for better or worse.

For example: What is the situation on the ground? The milbloggers can’t agree. Nick Dowling, a longtime defense policy expert and former Clinton administration DOD appointee, is in Afghanistan and blogging a series titled “Are We Winning?” for Small Wars Journal. “The general consensus from those on the ground is that we are making progress in security and the population is responding, especially in the south,” he writes. “The story here sounds pretty close to the [counterinsurgency] manual.”

That doesn’t quite cut it for Afghanistan consultant and PBS Need to Know blogger Joshua Foust, who gives Dowling what-for. “I’m scratching my head trying to find something concrete and not buzzword-y in this. We’re achieving progress, generating effects, and we’re particularly effective at it? Oh yeah and the media sucks?” Foust’s recent writing gives another reason why readers should be skeptical of official-sounding media reports from Afghanistan and Pakistan: They seem to kill “30 militants” in every raid. “The sheer ubiquity of that number in battle reports is astonishing, so much so that I don’t even pay attention to a story anymore when they use that magic number 30,” he writes. “It is another way of saying officials really have no idea who got killed or hurt, but it’s probably a lot.

Groundless optimism much? It’s a problem at the very top, too, say some critics. Jason Fritz, a former Army officer and contributor to the military blog Inkspots, seized on a new AP interview with General David Petraeus in which the Afghanistan commander reaches for his actuarials to prove progress: “He turns to his computer and digs out the latest statistics on violence in Iraq—only six incidents thus far that day, compared to roughly ‘220 a day back in 2007,’ which is proof, he says, that his counterinsurgency strategy worked once and will again.” Bunk, says Fritz. “Much like the surge plan for Iraq, we seem to be using what I’ve referred to previously as planning on the enemy’s Least Dangerous Course of Action,” he writes. “When we find ourselves in these ‘hard but not hopeless’ situations, we seem to use hope as a major line of operation…Hope is not strategy.”

Even the most conservative of milbloggers is sensing some emptiness in Petraeus’ hopey-changey thing. “Uncle Jimbo,” a former special operations soldier who runs the troop-lovin’, lefty-hatin’ blog Blackfive, acknowledges that the Taliban in Afghanistan have gotten the best of President Hamid Karzai and Barack Obama, and it’s time to cut a deal with the militants. “You can’t really blame Karzai he has to be ready for some sort of ‘live and let live’ arrangement with them that will almost certainly have them in parliament and probably with some cabinet level posts as well,” he writes. “Does this suck Hoover? Well of course it does, but I think it is a near inevitability.”

Meanwhile, back “downrange”—as the salty fellows call the war zone—politics don’t factor into the day-to-day. Just ask “Charlie Simpson,” a civilian working in Afghanistan who blogs about her exploits. Most of her posts are short missives that expose the visceral realities of a life lived in the pressure cooker of combat:

I was invited to a fairly senior, totally serious interagency meeting at the Embassy yesterday. Location? Poolside. No seriously, that’s what the email said: “3pm, Poolside.” Sadly there were no cabana boys taking frozen drink orders.

An aberration, right? Surely, America’s best and brightest are in the line of danger most days, sacrificing their safety for the cause of freedom and justice. Isn’t that correct, Charlie?…

I think I broke my toe. Doing yoga.