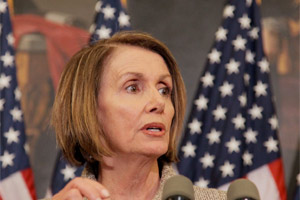 Even an old Blue Dog can learn new tricks. In a debate on Wednesday against energetic Republican challenger Austin Scott, Georgia Dem Rep. Jim Marshall announced that he wouldn’t back Nancy Pelosi as Speaker if Democrats somehow manage to retain the House on November 2. “I have always preferred a different candidate, but Nancy Pelosi always had her votes,” he declared. In previous go-rounds, he said, “[t]here wasn’t much point in sticking a thumb in her eye.” Now trailing Scott by almost 3% with less than two weeks till election day, Marshall has changed his mind.

A conservative Democrat, Marshall has supported Pelosi’s previous bids for the speakership. And his record—siding with his party 88.5% of the time, including votes for the stimulus and bank bailout—isn’t exactly anti-Pelosi. Marshall supporters argue that the reversal is an example of his independent bona fides. But moderate Dems across the country have been distancing themselves from party leadership for some time now.

Given the 8th district’s conservative demographics and recent Republican-friendly redistricting, Marshall’s ability to hold onto the seat is something of an anomaly. This year, he’s had little choice but to play heavily to the right, and has received endorsements from the Republican-favoring US Chamber of Commerce and the National Rifle Association. Weighty endorsements aside, the Republican leadership smells blood in the water. House Minority Leader and presumptive future Speaker of the House John Boehner paid a visit to the 8th on Tuesday, where he made a speech promising plum committee spots to newbie House Republicans.

But what happens if Marshall and other endangered moderates win? Will they face the wrath of Nancy, Steny, and Co.? Pelosi doesn’t seem to be losing sleep over Marshall’s comments or other such denunciations around the country. “I just want them to win,” she said recently on the PBS NewsHour. That suggests forgiveness could be in the offing—provided that wayward Dems return to the fold.