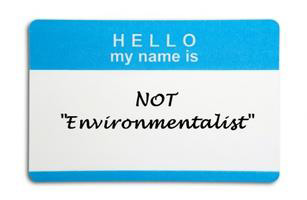 This may not be the most important thing in the world, but it drives me crazy: What do you call people who care about climate change and clean energy (PCCCCE)?

The political press still typically uses “environmentalists,” but that terminology is woefully outdated and inapt. For one thing, not all environmentalists are primarily PCCCCE—there are still some, believe it or not, who focus on things like land preservation or biodiversity. More to the point, lots and lots of PCCCCE aren’t environmentalists. They inhabit insurance companies, the cleantech industry, the military, religious groups, hunting and fishing groups. Some are just citizens of good conscience. What unites them is a belief that climate change and clean energy are the top-line issues of the 21st century.

Of course environmental groups will be partners in the climate effort, but they will not lead it and should not be its main public face. It’ll never work if environmentalism has to shoulder the full political weight of climate.

The fact is, PCCCCE are extremely diverse. There needs to be a term for them that doesn’t carry too much ideological baggage, something they would all accept, even given their cultural and policy differences. Are they “climate change advocates”? Well, they don’t advocate for climate change. The “climate concerned”? Weak. “Climate crusaders”? Too do-goody. “Clean energy advocates”? Sterile and wonky. “Greens”? Meh. That term has been drained of all life or power by the trendy marketing of the last five years. “Sustainable … ists?”

You see the problem. It’s something I’ve struggled with as long as I’ve been writing about this stuff. Just this week I’m starting in on a series of posts about what PCCCCE should do next in light of the climate bill failure. But I still don’t have anything to call them! (Obviously I can’t keep using PCCCCE.).

Why is there no term? There’s more at stake here than the semantic frustrations of journalists. Sometimes sociopolitical change begins with naming, identifying issues and concerns once thought unrelated as part of a larger phenomenon. That’s what feminism did in the ’60 and ’70s—it took a seemingly diffuse set of issues from housework to child-rearing to employment compensation and gathered them up under a common banner. It illuminated the connections and showed that disparate people were in fact involved in a common struggle.

Without a name, there’s no identity. It’s hard for, say, a corporate director of sustainability, a military officer, and a community organizer to bridge their differences and work together if they don’t feel, on some level, like they’re involved in the same thing. To name that thing is, in a sense, to make it real.

So, let’s hear from you. What should PCCCCE be called?

This blog post was produced by Grist as part of the Climate Desk collaboration.