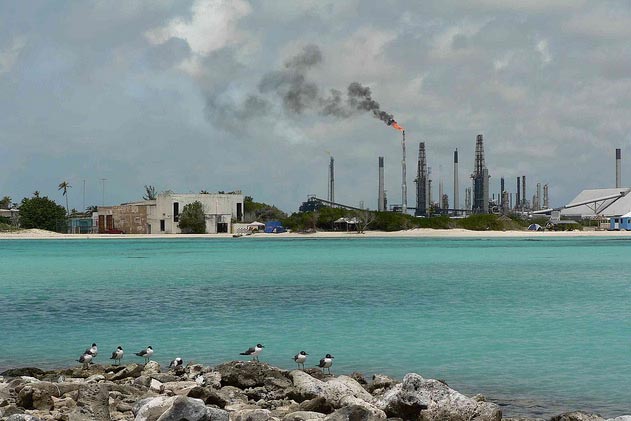 With federal action on climate change stalled in the Senate, the next major environmental war is being waged in California, where a ballot measure will soon decide the fate of the most comprehensive piece of greenhouse gas legislation in US history.

The measure—Proposition 23—could upset the landmark climate bill Gov. Arnold Schwarzenegger signed into law in 2006. The Global Warming Solutions Act, or AB32, requires that the state decrease emissions down to 1990 levels by 2020—an approximate 25 percent cut from current levels. Implementation of the plan is supposed to begin in 2011. But Prop. 23—whose “yes” campaign is funded largely by out-of-state fossil fuel interests—seeks to delay the cuts until the state’s unemployment stays below 5.5 percent for four consecutive quarters—which, given the economic downturn around the country, and the 12.8 percent unemployment rate in California, might take quite a bit of time to pull off.

Competition over the measure is fierce, with both sides now dumping millions into campaigns. “It’s full scale war,” says Steven Maviglio, the spokesman for the No-on-23 campaign, backed by a coalition of environmental, labor, health, and progressive business groups in the state. Maviglio was previously the deputy chief of staff for former California Assembly Speaker Fabian Nunez, who authored AB32.

“The oil companies want this to be strike three for climate change, after Copenhagen and Capitol Hill,” Maviglio continued, referring, of course, to the failure to reach an international accord at the United Nations climate meeting in Denmark last year and the Senate’s inability to pass legislation this year. “They’ve made it very clear they want to crush this once and for all in California.”

According to data from the California Secretary of State’s office, more than 98 percent of contributions to the pro-Prop. 23 campaign are from oil companies. Eighty-nine percent of the contributions come from out of state. The biggest spenders have been Texas-based oil giants Tesoro Corp., Valero Energy Corp., and an oil-refining business owned by the oil and gas company Koch Industries. Valero contributed $4 million, Tesoro gave $1.5 million, and a refinery owned by the notorious Kansas-based billionaire brothers David and Charles Koch, of Koch Industries, kicked in another $1 million. Just last week, Houston-based Marathon oil contributed $500,000.

The goal is clear: “If you can drive a stake in the heart of climate policy making in California, it will have a massive political chilling effect elsewhere in the country,” said Wade Crowfoot, the West Coast political director of the Environmental Defense Fund.

California certainly has a history of leading the way on emissions rules. It was the state’s 2002 request to set limits on greenhouse gas emissions from automobiles that led 16 other states to adopt the same policy, which in turn forced automakers to accept that standard at a federal level. The deal the Obama administration reached with automakers and those states in 2009 created the first national, unified standard for auto emissions and fuel economy; the rules are expected to equate to the greenhouse gas savings of taking 177 million cars off the road or shutting down 194 coal-fired power plants.

The big spending from oil interests belies the fact that the issue is fairly bipartisan in the state. The state’s Republican governor has been a strong backer of the measure, getting more fired up in recent weeks in his criticism of the oil companies for what he said are disingenuous claims about the climate law’s effect on jobs. He called the idea that stopping AB32 will create jobs like “Eva Braun writing a kosher cookbook,” among other pointed lines. “Does anyone really believe that these companies out of the goodness of their black oil hearts are spending millions and millions of dollars to protect jobs?” asked Schwarzenegger. (The CEOs of Valero and Tesoro responded with an op-ed accusing the Governator of trying to “demonize” their efforts and claiming that the companies are just trying to protect their combined 3,841 employees in the state.)

The state’s Republican gubernatorial candidate, Meg Whitman, also opposes the measure, if less than enthusiastically. She’s tried to cut the issue both ways, calling for a “no” vote on the measure but also a one-year suspension of AB32.

The majority of likely voters are so far also indicating that they intend to vote “no.” A Reuters/Ipsos poll released on October 6 found that 49 percent of voters oppose Prop. 23, while just 37 percent support it. This is good news for fans of the climate law, as absentee voting began in the state this week. But it’s far from a done deal: Veterans of ballot initiatives recall the 2006 effort to instate a new tax on oil to fund investments in alternative energy. While it polled well early on, oil companies dumped $95 million into a campaign against it, and much of that was spent on television ads late in the game. On election day, 54.7 percent of the state opposed the measure.

With the stakes getting higher by the day, national environmental groups are also pouring in funds and resources. The League of Conservation Voters has contributed $550,000 to the California chapter’s No-on-23 ballot measure committee, and its sister organization, LCV Education Fund, plans on making a similarly sized contribution. EDF and Natural Resources Defense Council Action Fund have made donations in the million-dollar range as well. The No-on-23 efforts have so far gathered a war chest to rival the measure’s backers, with $7.5 million on hand right now, according to the coalition. The No campaign brought in $5 million in the first week of October (with the wives of two Google founders each kicking in six-figure donations), while the campaign to revoke the law brought in just $10,000 in that period.

The effort to protect the state’s landmark law itself holds national significance, says Sierra Club executive director Michael Brune. That the coalition includes several hundred businesses and trade groups—including Pacific Gas & Electric, the largest utility in California—demonstrates the emerging division within the business community when it comes to climate regulations. “We think it’s a harbinger of the national conversation, in which there is an increasing sector of the business community that recognizes that not only is this clean energy transition good for business, it’s necessary to create a strong business climate,” said Brune.

It would also mark the first time that an entire state of voters would get to decide whether or not to take comprehensive action on climate change. Never before has the decision on this kind of comprehensive plan been put directly to voters.

But if AB32 goes down, it would “send the message around the country that no piece of environmental legislation is safe,” said Sierra Club’s Brune. “There’s always an oil company or a coal company that can come in and roll it back.”