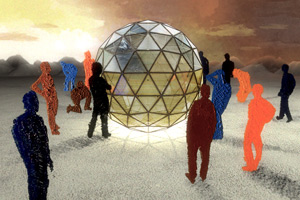 Coalition of the Willing/Knife Party

Can you survey the entire cultural and economic history of the 20th century’s last half in one 16-minute film? That’s director Simon Robson‘s short term goal for the video “Coalition of the Willing,” now up for an animation award at Saturday’s Vimeo Festival in New York. His long term goal is even more ambitious: Unite people around the world in “an internet-based swarm offensive aimed at triggering a 21st century culture shift.” But although Robson may be trying to incite utopia, he self-identifies as a cynic. “It sounds bleak, but as we say at the beginning of the film, industry is ruled by profit, and governments by growth.” Fed up with leaders’ unwillingness (or inability) to enact climate change policy, Robson and his writing partner, Tim Rayner, started toying with the idea that leaders weren’t going to do anything at all, and that collective power modeled after the social revolutions of the past would have to do instead. An invocation, in the form of a script, emerged. To illustrate the message of the film, Robson employed stunning visuals by 25 different animators. The resulting patchwork of contrasting artistic styles, animated by a diverse panoply of materials—from clay to fruit to ink—effectively paints the film’s collaborative calling.

After “Coalition” was released in June, it garnered attention from the likes of MTV Europe, the Guardian’s environmental page, and even Ashton Kutcher (who tweeted about the film, much to Robson’s joy). It also spawned an organization, CoalitionoftheWilling.org. The organization’s latest project is a flash mob development party, meant to inspire people to submit ideas for “a new generation of internet platforms for the climate crisis.”

Mother Jones spoke with Robson recently on the intersection of environment, art, and technology.

Mother Jones: There have been many recent calls for action in the environmental movement, from 350.org‘s global days of action to The Wave March in England last December. What did you want to say with this video that would be different or necessary after so many wake-up calls have been made by various organizations? What are you adding to the dialogue that didn’t exist before?

Simon Robson: Really, I think that the tendency tends to be, even with 350.org, the organizations geared toward stimulating and provoking action are still looking to governments. What they’re saying is: We are organizing all this action with all these people around the world; OK leaders, what are you going to do? Whereas Tim and I started off very much with the idea that leaders haven’t and aren’t going to do anything at all. It sounds bleak, but as we say at the beginning of the film, industry is ruled by profit and governments by growth. There are academics who are interested in the idea of steady-state economics, so not growth but sustaining the economy. But it’s very fringe. It’s brilliant thinking, but it’s fringe. People are still praying in the US and the UK for speedy recovery from the recession. Well you know, what does recovery mean? It basically means the expenditure of carbon fuels. Tim and I are not recessive, we are not Luddites. We’re not saying the world should stop. We’re firm believers in the need for people to innovate, to get together, to share solutions, expertise. But it has to come from the people, and it can’t come from the expense of the planet. We have no belief that governments will supply the people. It’s up to the people and the technology and the historical precedence, the movement that climate change now needs is now set. We have the open source network, we have the precedence. Now with the growth of social media, we are keyed up like never before. And what we’ve found, since releasing the film, is that many people have come to us and said, wait a second, we’re doing something like that.

MJ: I am interested in the artistic side of the film; you’ve created a very cool intersection of environmentalism, art, and technology. How did you find all of the artists?

SR: Tim and I finished drafting the script at the end of 2008. When we started storyboarding the film, we realized that the work I wanted to do at the time was going to be stop-motion and camera, using some very old techniques, like paint on glass, was going to take forever. So I did a test in one section that combined three styles (Simon and two other artists)—that’s the section about counterculture that starts with the guy walking down the street seeing the car—and put it all together and it looked great. I presented at a creativity conference called F5. At the end, we put a call out and asked if anyone wanted to get involved in collaborating on the film. And it really spiraled from there. Many, many people got in touch. 5-10% were right; not that the others weren’t good, but I wanted to work with animator-directors at studios. I wanted to hand over the aesthetic to them.

MJ: So you let them decide which materials to use?

SR: Oh gosh, yes. I didn’t tell anyone what their sections should look like. I just said submit ideas, and mostly they were great the first time. We just moved on like that.

MJ: The film points to the relationship between the individualistic-centered cultures of the 80’s and 90’s and the mass consumerism that has led in part to climate change. Have you gotten any specific ideas on how to convince people to consume less?

SR: It’s very, very hard. And I myself feel very hypocritical right now, because although I live a low-carbon lifestyle, my family and I are returning to Australia, which means a whole hell of a lot of carbon in the airstream. It’s really pulled at my heartstrings for a long time.  It’s terrifically hard to preach and tell people to consume less. Why do I like buying clothes? Perhaps because I slightly define myself by the clothes I buy. How do you tell people not to do that? I don’t think you can. I think what you have to do is put a more positive spin on community. The 80’s were all about telling us we were individuals who were to define themselves and their own success by their individuality. Now these days all roads lead to the mall. We often feel a bit like isolated individuals living cheek by jowl. The cooperation we talk about in the film relies on an increased sense of community. I think it’s more about communities working together to collaborate on low carbon lifestyles.

MJ: In the 60’s, during the counter-culture revolution, people were working en masse on many of the same issues without realizing it, but it seemed like they were having a lot of fun too. The incentive to act out of the norm became pretty large for youth. So I’m wondering, what sorts of incentives could be provided to make young people want to join a big movement now?

SJ: I don’t think understanding the planet’s going up in flames is any sort of incentive; I think we in the first world are plenty used to hearing disastrous views, and I think it goes in one ear and out the other. And that’s not a bad thing, it’s just how humans largely work. Some would suggest that our natural instinct is to react to small, imminent threats. But these global problems, we’re not used to registering them emotionally. I don’t think that explaining what’s happening has the same impact.

Now, how to engage youth these days? That’s really the multi-billion dollar question. I would suggest there could well be a tipping point not far around the corner. It’s funny that I said geological disasters might not engage people, but they might when they come close to home. I mean, look what’s going on in China and Pakistan now. New Orleans, all these climate disasters. I wouldn’t be surprised if a slight disillusionment with the increasing corporate interest in youth culture coupled with some close-to-home natural disasters might well be a catalyst for people coming together to start thinking about these problems.

MJ: Who do you most want to see this film and how are you going to get it to them?

SR: At first I kind of thought to myself: I want Al Gore to see this, I would love people very influential in the software communities to see this, and in the environmental movement, but the more I think about it…I think I most want the people to see it are the ones who are seeing it, which is just a complete random mix of everybody, some of who are web-savvy and realize it’s potential. Some just appreciate the aesthetics. Some people who disagree with it. I think the people who I want to see it are just the world in a very random way. I just think the idea of figureheads—of course there will be some people who see it will be influential and will be able to do something if they want to—but that’s down to the chance of putting something out onto the internet. You just open it up to the swarm and see who catches on. I think if I was so focused on figureheads, I think it would be a complete betrayal of the ethos of the film.

And how am I going to get them to see it, get the people I want to see it? By putting it on the web, which we’ve already done. I think that’s it.

Coalition Of The Willing from coalitionfilm on Vimeo.