For all the dysfunction, moral cowardice, and hamfisted leadership in the fight for a federal climate bill, there’s a good deal of ambitious work being done at the state level. Cleantech entrepreneurs are finding ways to build profitable businesses nearly everywhere, but particularly in states that deliberately encourage it.

Thirty-two states do this by participating in the Northeastern, Midwestern, or Western cap-and-trade programs. Thirty states guarantee a market for clean energy through renewable-energy standards (which require electricity providers to get X percent of their power from clean sources by X year). Interestingly, Texas, Colorado, Wisconsin, New Mexico, and others have strengthened their original targets after finding them cheaper and quicker to reach than expected. 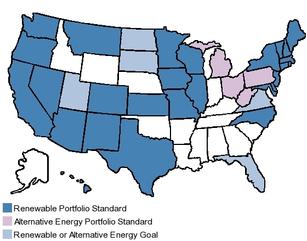 Shaded states have some form of renewable energy standard. Image: The fantastic map collection at the Pew Center on Global Climate Change

The progress isn’t just on energy. Other states are changing the built environment through complete-streets policies, smart growth plans, and transit investment that reduces the need for oil.

However—you knew it was coming, right?—much of this work is threatened by candidates for governor who don’t buy the potential of clean energy, don’t see the point of non-auto transit, or simply demonstrate indifference to it all. Of the 37 Republicans running for governor this fall, 22 reject the science of climate change, as Brad Johnson of Think Progress found in a run-down.

(Green-investment opponents are nearly all Republican, although third-party candidates Tom Tancredo of Colorado and Tim Cahill of Massachusetts fit the pattern as well).

I’ve been reporting on particularly important and competitive races for our Gubernatorial Tutorial series. I’d encourage you to give it a look if you’ve got connections to California, Colorado, Florida, Illinois, Massachusetts, Michigan, Minnesota, Ohio, Texas, or Wisconsin.

The theme that emerges in these races is the vast difference in the concerns of candidates. Disagreements aren’t about who has the better plan to cut climate pollution, create jobs in cleantech sectors, or free the state from dependence on oil and coal. Democrats devote varying amounts of attention and detail to these ambitions, but for most Republicans, they’re simply not goals at all.

Few devote words in debates, stump speeches, or on their websites to how they would govern on these issues. Brady, Scott, and Baker mystify politicos in their states. Walker’s “green energy” web page is blank.

The exception is Michigan’s Rick Snyder, a venture capitalist and former Gateway executive who speaks freely about investing in clean entrepreneurship and promoting the health of central cities through transit and growth strategies. He’s an outlier.

For another way to see what’s at stake, Think Progress has a separate new report estimating that renewable energy standards will create more than two million jobs by 2030—unless hostile governors repeal them. Many of those are ongoing jobs. Others are temporary jobs in the construction industries that have been especially hard-hit in the recession.

Future jobs numbers are tough to calculate, but the report draws on research finding that the wind and solar photovoltaic industries generate 40 percent more jobs per dollar than coal and that renewable energy creates significantly more jobs per megawatt-hour than fossil-fuel sources.

Two million jobs. In an election that’s supposed to be all about jobs, that ought to be bigger news.

Here’s where those jobs are most at risk:

This post was produced by the Grist as part of the Climate Desk collaboration.