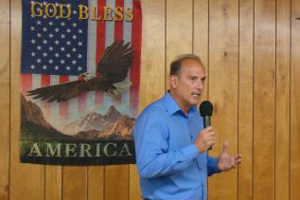 How big of a scandal does it take to make a congressional candidate unelectable? This year, if you’re a Republican, it has to be pretty darn big.

Take GOP House candidate Tom Marino in Pennsylvania’s Tenth District, located in the northeast corner of the state. As a US attorney, Marino gave a reference to his “close friend” Louis DeNaples, a convicted felon his office investigated for potential mob ties. When the Department of Justice reportedly launched an investigation into the reference, Marino resigned, and got a job working as DeNaples’ in-house lawyer.

Since then, Marino has offered several different stories about whether he was authorized to give DeNaples the reference in the first place. (He wasn’t.) But the scandal, which Marino’s Dem opponent, Rep. Chris Carney, has harped upon in ads and speeches, seems to have had little impact on Marino’s chances of ousting the two-term incumbent Blue Dog Dem. Nate Silver, the New York Times‘ polling guru, gives Marino a stunning 74 percent chance of winning on Tuesday.

DeNaples, who was convicted of defrauding the government of more than half a million dollars in the 1970s, needed a reference so he could obtain a license from the state gaming commission to operate slot machines at the Mount Airy Lodge, a resort he owns in Eastern Pennsylvania. In 2005, Marino provided that reference.

According to reporting by the Allentown Morning Call‘s Matt Birkbeck, Marino’s assistants learned about the reference in 2006, after they had launched a perjury investigation into DeNaples’ statements about his relationship to the Scranton-based Bufalino crime family. Marino’s assistants reported the conflict of interest to the Justice Department, which recused Marino’s entire office from the case and transferred it to another district. Then the DOJ launched an internal investigation into Marino’s conduct. The probe was closed when Marino resigned in 2007 to work for DeNaples.

On at least two occasions—in an interview with a local newspaper reporter last September and a radio appearance this April—Marino claimed that he had provided the reference only after receiving permission from his superiors at the Justice Department. That wasn’t true—at least according to the DOJ.

On September 28, Marino conceded that he never received permission to give the reference, and told the Sudbury Daily Item that he was allowed to give such references provided he “didn’t use his job title or attempt to promote individuals on his staff.” That meshes a bit with Justice Department guidelines, which say US attorneys shouldn’t use their “position or title” to “coerce; to endorse any product, service or enterprise; or to give the appearance of governmental sanction.”

Unfortunately for Marino, it is highly possible that he did in fact use his job title to provide the reference to DeNaples. The Pennsylvania State Gaming Commission has not released DeNaples’ application for the slots license. But blank license applications clearly indicate that references must include their occupations and business addresses. So if Marino filled out the form correctly, he also revealed his occupation when he provided the reference for DeNaples.

There’s also little doubt that Marino’s recusal from the DeNaples investigation constitutes an admission that there was a potential ethics issue involved in providing the reference. Justice Department rules mandate recusal “only where a conflict of interest exists or there is an appearance of a conflict of interest or loss of impartiality.” Deborah Rhode, a legal ethics expert at Stanford University Law School, says “it suggests that there is a relationship there that may be compromised by a conflict of interest,” cautioning that some of the details of the case remain confidential and she is only familiar with what has been reported publicly.

It’s clear that Marino feels the DeNaples story is damaging to his campaign. In mid-October, he told the Scranton Times-Tribune he didn’t want to take any more questions on the controversy. His spokesman did not return a call requesting comment. (Carney’s office also did not respond to interview requests.) Not taking questions “looks bad on multiple levels,” says Rhode. “This kind of conduct by a candidate is deeply problematic.”

I also asked Kent Kauffman, a legal and business ethics expert at Indiana University-Purdue University Fort Wayne, to analyze the situation. Here’s part of what he wrote:

If the allegations made against Mr. Marino are accurate, at least three, and perhaps up to five federal regulations on Department of Justice employee ethics are at issue. 5 CFR 2635.702(b) (on Misuse of Position) allows a DOJ employee to “sign a letter of recommendation using his official title only in response to a request for an employment recommendation or character reference based upon personal knowledge of the character of an individual with whom he has dealt in the course of Federal employment or whom he is recommending for Federal employment.”

If the gaming license reference doesn’t qualify as a ‘letter of recommendation’ under the Code of Federal Regulations, then this rule might not apply. However, if the reference document required the listing of the referent’s business position, then a question could be raised that Mr. Marino used his official title, which would seem to show that the reference was based on the underlying DOJ investigation. That rule’s focus is on the recommender’s knowledge of the recommended party coming from DOJ employment.

If Mr. Marino were to claim that the reference he gave to Mr. DeNaples was purely personal in nature and not official, that would seem to fly in the face of the purpose of a reference made to support someone’s business activities. When seeking such a reference, it would seem to be implicit that the title of the reference provider is more important than his or her name and address.

Kauffmann also cited other Justice Department rules on misuse of position, impartiality, and personal relationships as potentially problematic for Marino.

Even right-wing activists have had their doubts about Marino. In March, during the primary, Zach Oldham, a RedState.com contributor, wrote a post calling Marino the “GOP’s Giannoulias”—a reference to Illinois Senate candidate Alexi Giannoulias, whom Republicans have accused of being a “mob banker.” (RedState chief Erick Erickson promoted the post to the site’s front page.) Here’s how Oldham wrapped up:

One of the keys to a Republican resurgence is not only ensuring we have credibly conservative candidates running for office, but also candidates with a personal and professional record we can be proud of and defend. Tom Marino doesn’t fit the bill.

I recently asked Oldham if he still feels the same way about Marino. He responded via Twitter:

… to be honest, I haven’t paid attn to that race post-primary, but I’m sure he’s better than Carney.

According to the polls, a lot of the voters in the district feel the same way. Marino may have a pretty big scandal to deal with. But at least he’s not a Democrat.