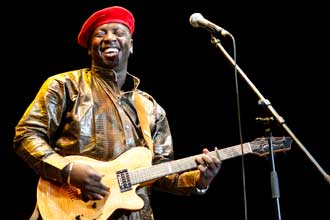 Vieux Farka Touré, the Malian guitarist who played at the opening of this year’s World Cup, has made a stunningly speedy ascent onto the world music scene. His own history is inseparable from his family heritage of Malian Western fusion. His father, Ali Farka Touré made the Rolling Stone 100 Greatest Guitarists list by bringing the world’s attention to the correlation between Western Saharan music and American blues, now often referred to as “Desert Blues.”

But Vieux is no mere shadow of his father. In fact, Ali initially discouraged him from pursuing a musical career, but relented after realizing his son’s talent. The younger Touré has made a name for himself by reinventing the fusion his father created—bringing funk, reggae, and jam music to the desert-blues genre and carrying this new sound worldwide. I recently asked Touré about growing up Touré, Malian society, and the music he likes to listen to.

Mother Jones: Your father encouraged you to go into the military rather than follow him in music. How come? And why did he have kora master, Toumani Diabate train you, rather than training you himself?

Vieux Farka Touré: My father thought that if I was to go into the army, at the least I would have a reliable paycheck at the end of each month with which to feed my family. Music is less assured. One could say more dangerous! [Laughs.] My father and Toumani were very close. Like family. We are all like family, actually. Toumani is like my father. Ali trusted him deeply. It wasn’t until near the end of Ali’s life that I started to play my own music. At this point, Ali was already sick. Meanwhile, he knew that he could trust Toumani to be my mentor and also that he had the business sense, the talent, experience, and wisdom to train me well. But at the same time, Ali and I spent a lot of time together in the last months of his life playing music together.

MJ: How do elders in your community receive your blend of the Western sounds with traditional Malian music?

VFT: It is mixed, I would say. Many of them love it. Many do not understand it, I think because they expect it to sound exactly like Ali’s music. In general my music is more easily understood by younger people in Mali, and by people outside Africa.

MJ: In an interview last year, you mentioned that guitars are often shared in Mali because of their rarity and expense.

VFT: Mali is a very social society. We share everything. I think sharing our resources in music forces us to collaborate more, play with other people more, share ideas more. We have oral traditions here, and songs are passed down and around this way. I think in the US you can play all the time in your own room and never see another musician your whole life. We can’t understand that in Mali.

VFT: Ali Farka Touré & Toumani Diabate of course! My two fathers playing together! It’s my favorite music to listen to.

MJ: What about a release outside your genre?

VFT: I liked Damian Marley’s and Nas’ Distant Relatives a lot. I respect each of them a great deal as artists, so I was very happy to hear them working so closely together.

MJ: Shuffle your iPod for me and name the first five songs that pop up.

VFT: “Walé,” which is a traditional song from the North of Mali sung by the elder women to honor the grand mosque each year. I adapted this song and it’s on my album Fondo.

MJ: Got any guilty pleasures?

VFT: Anything by Beyoncé!