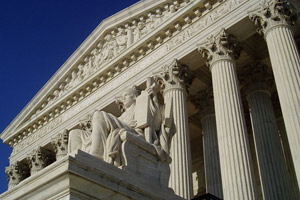 It could turn out to be a banner month for the Chamber of Commerce. Last week, one of the powerful pro-business lobby’s biggest congressional foes, Sen. Russ Feingold (D-Wis.), was defeated, in no small part due to its efforts. And on Tuesday, the Supreme Court will hear a case that could solidify the success of one of the Chamber’s longtime goals, an agenda Feingold has vigorously fought back against: limiting the ability of consumers to sue businesses for fraud and other wrongdoing.

AT&T v. Concepcion has been called the consumer protection equivalent of Citizens United. At stake is the ability of consumers to stop corporate ripoffs via class action lawsuits, which allow lots of people with small claims to band together and bring a suit large enough to make it worth a lawyer’s time. The case could affect everything from the rights of workers to fight systemic discrimination or wage violations to the ability of cell phone customers to fight the small but lucrative rip-offs that are so common among wireless providers. As a sign of how big a case this is for corporate America, the wireless lobby has hired former Solicitor General Paul Clement, a rock star of the Supreme Court bar, to represent it on an amicus brief in the case. The parties backing AT&T include the Chamber, Comcast, Dell, and DirectTV.

“In Concepcion, AT&T and the Chamber of Commerce are asking the Supreme Court to do the same thing for consumer protection that Citizens United did for election law,” says Paul Bland, a lawyer with the public interest law firm Public Justice who has spent many years battling unfair arbitration clauses on behalf of small consumers. “In Concepcion, the Chamber wants the Court to overturn a number of precedents and eliminate the most important safeguards that have limited corporate abuse in the past.”

The Chamber has been systematically fighting to limit consumers’ access to the courts for years, particularly through class actions. In 2005, it finally succeeded in winning legislation that made it much harder to bring such cases in state courts, after investing more than $20 million in lobbying Congress. But it didn’t stop there. It has defended the right of big companies to use contracts to wipe out whatever legal rights for consumers remained. And that’s where Tuesday’s Supreme Court argument comes in.

The case involves a California couple who bought phone service from AT&T in 2002 based on advertising that the service would include “free” phones. Later, they found a $30.22 charge on their bill that had never been disclosed to them. They sued, and AT&T tried to force them to take the case to mandatory arbitration as required by a clause in their contract. Arbitration clauses are those little blocks of fine print buried in everything, from cell phone to nursing home to employment contracts, that require people to give up their right to sue in a real courtroom, forcing them instead into private arbitration—with an arbitrator paid for by the very entity with whom the consumer has a beef. Not surprisingly, consumers typically don’t fare very well in such forums.

The Concepcions’ contract not only required them to give up their right to go to court but also their right to join any potential class action. The couple argued that the arbitration clause essentially allowed AT&T to contract away consumers’ legal rights. A US district court agreed, noting that AT&T had “essentially granted itself a license to push the boundaries of good business practices to their furthest limits.” The 9th Circuit Court of Appeals also sided with the Concepcions, and the case went up to the Supreme Court from there.

AT&T’s odds are mixed: The case isn’t only about consumers but about the rights of states to enforce their own laws, many of which outlaw contractual bans on class actions. Justices Clarence Thomas and Antonin Scalia are sympathetic to these cases due to their states’ rights ideology. But no one will be surprised if AT&T and its big business backers prevail. The Chamber has been laying the groundwork for this case for years. The court has issued a string of recent rulings upholding the right of corporations to do an array of things under the guise of arbitration clauses. Most recently, in Rent-a-Center West v. Jackson, the court ruled that companies can even write arbitration clauses that force employees who think the provision is illegal to ask an arbitrator, not a judge, to make that determination. In effect, an aggrieved employee could be in the absurd situation of having to ask an arbitrator whether hiring the arbitrator is unfair.

If the court finds in favor of AT&T, and rules that big companies can evade state laws and essentially write contracts that eliminate fundamental legal rights, the only remedy for consumers and workers will be a legislative one. But the Chamber seems to have already thought of that. On election night last week, the Chamber declared victory in its expensive campaign to knock off Feingold, a three-term senator best known for his work on campaign finance reform. But less known has been Feingold’s work fighting the Chamber’s efforts to deprive average Americans of their right to sue. He was one of only 26 “no” votes against the 2005 class action legislation.

And, as chairman of the Senate Judiciary Committee’s Constitution subcommittee, Feingold has introduced and held several hearings on legislation that would ban the use of mandatory arbitration clauses in consumer contracts. For that, and other acts of anti-business heresy, the Chamber viciously attacked Feingold. It dumped at least $750,000 into the race, running attack ads that framed Feingold as a big government spender. Never mind that he opposed TARP, the Bush tax cuts, and the Iraq war—the past decade’s budget-busting trifecta.

Feingold’s departure doesn’t mean the fight against arbitration clauses will collapse entirely. As long as Democrats hold the Senate, the subcommittee is likely to be chaired by another liberal, either Al Franken or Amy Klobuchar, who are both from Minnesota. Franken has already become one of the Senate’s leading foes of forced arbitration and successfully banned such clauses from employment contracts used by defense contractors. But the change in makeup of the Senate means that the Judiciary Committee will be getting a few new Republican members.

One of those newcomers could even turn out to be Rand Paul, the quasi-libertarian Kentucky eye doctor and tea party favorite. Paul’s legal qualifications are dubious at best, given his comments about the legality of the Voting Rights Act. (During the campaign he told an MSNBC interviewer that he believed restaurants should be able to refuse service to minorities.) He’s not likely to get on board with the movement to abolish mandatory arbitration. That means most consumers will be stuck fighting arbitration clauses one contract at a time. Of course, most people don’t even realize they’ve signed these things until it’s too late. Russ Feingold understood that, and that’s one reason why the Chamber and others ensured he got booted out of Congress.