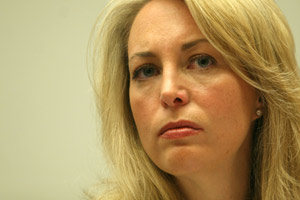 In his new book, George W. Bush repeatedly challenges the charge that he misled the country into the Iraq war. He writes, “I didn’t like hearing people claim I had lied about Iraq’s weapons of mass destruction.” But while defending his integrity, he presents assertions that are outright false: for instance, that Iraq had a WMD infrastructure and was pursuing such weapons at the time of the invasion (it did not and was not), and that Saddam Hussein had refused to cooperate with UN weapons inspectors (he was not fully cooperating with inspectors, but the inspectors had reported Iraq’s cooperation was increasing). His account is often selective—such as when he recounts a 2003 meeting with Tony Blair and fails to mention that at this session he (Bush) raised the possibility of kick-starting the Iraq war with a phony provocation. But Bush’s selectivity is glaringly apparent when he recounts one of the dark moments of his presidency: the outing of CIA officer Valerie Plame Wilson.

Bush describes this episode for one purpose: to discuss the “most emotional personnel decision” of his presidency—whether or not to pardon White House aide Scooter Libby, who had been convicted of lying to FBI agents and a grand jury during the investigation of the Plame leak. He notes that this affair began when former ambassador Joe Wilson, Plame’s husband, wrote a post-invasion op-ed challenging Bush’s pre-invasion claim that Iraq had sought to buy uranium (presumably for use in a nuclear weapons program) from Niger. Bush doesn’t fully cover the back story: Nearly a year prior to Bush publicly making the uranium-from-Niger charge, the CIA—after Vice President Dick Cheney had requested the agency provide him more information on this matter—asked Wilson to trek to Niger to check out the allegation. Wilson did so and reported back to the agency that this sort of uranium deal would have been nearly impossible to pull off.

Bush claims that there were “serious questions about the accuracy” of Wilson’s report. But there weren’t. The State Department had even objected to sending Wilson to Niger because it already had concluded that no such deal could have taken place. After Wilson shared his findings with the CIA, the agency did not question his conclusions. CIA officers, though, weren’t surprised that the Nigerian officials with whom Wilson met had denied such a sale had been arranged.

Bush maintains that the trouble started when conservative columnist Bob Novak reported that Wilson “had been sent to Niger not by Dick Cheney or any senior member of the administration, as Wilson had suggested, but on the recommendation of his wife, Valerie Plame, who worked at the CIA.” Yet Bush doesn’t describe precisely what Novak wrote. Here’s the key sentence from that scandal-triggering column: “Two senior administration officials told me that Wilson’s wife suggested sending him to Niger.” That is, Bush ducks acknowledging that more than one official in his administration leaked this information to Novak. Later in his account, he refers to Novak’s “source”—not “sources”—and mentions that Richard Armitage, the deputy secretary of state, had told Novak about Plame. Bush neglects to remind his readers that Novak’s second source was Karl Rove, his key political strategist. Bush also doesn’t say that Libby talked to reporters about Plame or that White House press secretary Ari Fleischer might have done the same.

In fact, Rove, a key player in the Plame saga, doesn’t appear in Bush’s account at all.

During the Plame scandal, Bush said, “If somebody did leak classified information, I’d like to know it, and we’ll take the appropriate action.” And, on behalf of Bush, Scott McClellan, who succeeded Fleischer as press secretary, denied at the time that Rove was implicated: “He wasn’t involved. The president knows he wasn’t involved…It’s simply not true.” Yet, as it turned out, Rove was neck-deep in the scandal. Not only had he been Novak’s second source, he also had told Matt Cooper, then a Time magazine reporter, that Plame was a CIA officer.

The subsequent investigation led by special prosecutor Patrick Fitzgerald focused on Rove’s role and whether Rove had testified accurately about his conversations with Novak and Cooper about Plame. As Michael Isikoff and I reported in Hubris: The Inside Story of Spin, Scandal, and the Selling of the Iraq War, Fitzgerald came close to indicting Rove for not testifying accurately, but ultimately he chose not to.

Meanwhile, once Rove’s involvement became public, Bush and the White House refused to discuss it or to retract the White House’s previous denials about Rove. Contrary to Bush’s vow, there was apparently no “appropriate action” taken regarding Rove’s leaking of classified information. (Plame’s employment at the CIA was classified information; her outing endangered her and WMD-related operations she had worked on.)

In his book, Bush Photoshops Rove out of this scandal. By doing so, Bush doesn’t have to explain why he took no action against Rove or justify why he did nothing after his press secretary falsely told the public that Rove was not connected to the Plame leak.

Bush ardently defends his decision to commute Libby’s sentence without pardoning him, revealing that most of his advisers “believed that the jury verdict was correct and should remain in place.” He recalls that this led to a showdown with Cheney. Libby had been Cheney’s chief of staff, and the vice president was a forceful advocate of a pardon. At one meeting with Bush, Cheney declared, “I can’t believe you’re going to leave a soldier on the battlefield.” Bush writes that in eight years he had never seen Cheney so worked up. But in Bush’s telling, he stood his ground, striking a tough position only because he believed it was the right one. The whole point of this episode—which appears in a chapter called “Personnel”—seems to be that Bush was his own man in the Oval Office and was willing to say no to Cheney.

Yet the CIA leak case was about much more than Bush’s ability to stare down the veep. The questions that remain concern Bush’s willingness to tolerate a White House campaign to discredit an administration critic (a campaign that led to the exposure of a CIA officer who had overseen efforts to gather intelligence on WMDs in Iraq and elsewhere) and Bush’s decision to do nothing about both Rove’s involvement in that effort and Rove’s attempt to cover up his role. Bush has nothing to say about any of this. (A much fuller and more accurate account of the CIA leak case can be found in the new movie Fair Game, even if this Hollywood picture fictionalizes aspects of the story.) For Bush, the Plame case is only a tale of a difficult decision about a pardon. It is not about political skulduggery or dishonesty at the highest levels of the government. Whether Bush’s narcissistic treatment of this event counts as a lie or not, it certainly isn’t honest.