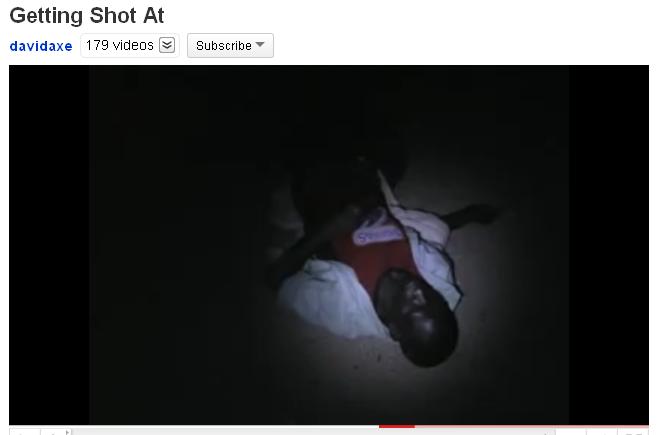 So, apparently Bill Nye the Science Guy was giving this speech to a bunch of Southern California students Tuesday when he tripped over an extension cord, knocked his head, spoke some gibberish, and fainted onstage. And the crowd just sat there, with nary a good Samaritan among them, live tweeting the series of unfortunate events till Bill came around of his own accord. Twitty Twitterers? You bet. A sad commentary on the youngs and their gawker culture? Perhaps.

But journalist David Axe has a different takeaway from the audience’s unresponsiveness. A young war correspondent for the likes of Wired and the Washington Times, Axe writes on his group blog War Is Boring that “this ‘passivity’ could also be something else: journalistic ‘objectivity.'” Then he gets weirdly personal:

Two years ago, I took the time to videotape a gunshot man dying on a street during a battle in Abeche, Chad. I did not try to help the man as he lay at my feet. I fled only when someone opened fire in my direction. It’s all there in the video, above.

Asked about the incident a year later, I said it never occurred to me to help the man. It was my job to document the battle and its victims. If forced to choose between trying to save the life of someone I did not know, or recording his slow death so that I might highlight its tragedy, I suppose I will usually choose the latter. I am not a medic. I am not a decent person. I am a journalist.

And so are the USC students, in a sense. The more we equip ourselves with the technology to document our own lives and events around us, the more we might see merely observing as a role—and an important one. In that sense, it’s hypocritical for any journalist to criticize the students for watching rather than acting. For if they are a good journalist, they would have done the very same thing.

I’m pretty big into the social media, so for now I’ll accept Axe’s glib assertions that every roomful of students with smartphones is a roomful of journalists, and journalism is “merely observing.” (I’ll let Jay Rosen tackle that second idea.) The bigger problem is Axe’s cynical description of the news reporter as an amoralist. You can be a good person who cares about other human beings, or you can be a good journalist. You can try to save a life, or you can be “objective.” But you can’t be both.

It’s a false dichotomy, of course. Journalistic objectivity is what we make of it. And if we make it completely devoid of a moral core, then we fail epically both as journalists and human beings. Believe it or not, you can actually do a good deed in the middle of a reporting job and still tell the story.

But in the Chad shooting, Axe did neither. Here’s his Washington Times writeup:

…a reporter witnessed men dressed in military fatigues shooting at each other throughout downtown Abeche. One young man dressed in a mix of civilian and military clothes bled and died while soldiers and fleeing civilians stepped over him.

This excerpt is hardly “objective”: Axe gets an emotional reaction out of the reader by depicting “soldiers and fleeing civilians” stepping over the dying man…while neglecting to mention that he, too, paced around the poor Chadian. Strangely, though, in the video he filmed of the incident, Axe comes off as the star: He titled it “Getting Shot At.” (The video also shows that Axe made a tragically poor judgment, shining a light on the dying man in the middle of a pitch-black night—which brought a predictable hail of gunfire down on both him and the bleeding victim.)

The takeaway: There’s nothing potentially more dangerous in journalism than using “objectivity” as a pretense to practice amorality. News reporting doesn’t exist in a vacuum; it isn’t good in itself. It’s supposed to be good for something: Selling papers, educating citizens, exposing injustices or inhumanities, whatever. There’s always some higher value at play when a journalist is at work.

I get what Axe is trying to say. One of the biggest problems with paid journalists—commenters point it out a lot—is our tendency to overinflate our moral worth. We want to do work that Matters, that Makes a Difference in the World. It’s a good aspiration. Mother Jones exists because of it. But like all virtues, this one becomes a vice in megadoses. We all know that guy, the self-important reporter who thinks every hackneyed clause he spills into a Word file has the salvational properties of John 3:16. The one who claims no pretense to objectivity, which is good, since he’s totally subjective. (You’re reading one now.)

Yeah, that’s dangerous. But not as dangerous as grabbing a camera or notepad to report the news while leaving your moral scruples at home.

Now, Axe and his War Is Boring colleagues are very talented, and they all evidently believe in the power of journalism to transform society: They identify themselves on the site as “citizen journalists” with an interest in “peacekeeping over war-making.” Before his cynicism gets much worse, Axe should consider that mission statement anew. After all, it’s the “citizen” that comes first, not the “journalist.”