As an incoming congressman, Rep. Allen West (R-Fla.) sounded like he was spoiling for a fight. He once fired a gun at an Iraqi detainee, told his supporters to “grab your muskets, fix your bayonets,” and came this close to hiring as his chief of staff a woman who wanted to string up undocumented workers. It may have been tempting to view West’s record as a sign that we were entering a chaotic new era of congressional belligerence. Or maybe not. If anything, West’s incendiary style is a throwback to the days of yore, when the world’s greatest deliberative body witnessed its share of violence perpetrated by its members upon one another. Here’s a collection of some of the most memorably deplorable incidents.

Eschewing standard parliamentary procedure, in 1798 Vermont Rep. Matthew Lyon, a Republican, spit tobacco in the face of his bitter rival, Connecticut Federalist Rep. Roger Griswold. Griswold responded with a cane (this would become a trend), and Lyon, in a display of one-upmanship, seized a pair of fireplace tongs. Eventually sentenced to four months in prison for violating the Sedition Act, “the spitting Lyon” became the first member of Congress to win reelection from jail. Image: Library of Congress.

Before he was the founder and president of the Republic of Texas, Sam Houston was a back-bench congressman and a fiercely loyal Jacksonian. But when Old Hickory asked him to block John P. Erwin, a political enemy, from serving as postmaster in Nashville, Houston went a little extreme. After starting a whisper campaign against Erwin, Houston baited him into a duel. Erwin couldn’t make it to Washington to defend his honor, so he sent a friend as a proxy, whom Houston coolly shot in the groin. Photo: Wikimedia Commons.

A fiery Democrat who once dismissed a rival as a “squinting, skipping, squatting, squalling elf,” Rep. Robert Potter came to Washington as part of the Jacksonian Revolution of 1828. His rising star was quickly extinguished three years later when he was forced to resign after castrating two men—a preacher and an in-law—who had allegedly held closed-door hearings with his wife. Elected to the state legislature from prison, his political comeback was cut short when he was expelled from the chamber for threatening another member with a gun and a knife after a game of cards. Potter fled west and became secretary of the navy in the new Republic of Texas, where he was, inevitably, shot and killed in 1842. Photo courtesy of Texas State Library.

Upset with Massachusetts Sen. Charles Sumner’s abolitionist rhetoric, South Carolina Rep. Preston Brooks approached him on the Senate floor and beat him unconscious with his cane in 1856. Brooks later told the House he “meant no disrespect” by the assault, and mused about his choice of weaponry in a floor speech: “[I] speculated somewhat as to whether I should employ a horsewhip or a cowhide; but knowing that the senator was my superior in strength, it occurred to me that he might wrest it from my hand.” Image: Wikimedia Commons.

Laurence M. Keitt provided backup for Brooks during his caning of Sumner by standing a few feet away, brandishing a gun, and shouting at the onlookers—principally, “Let them alone!” That’s him on the left (the oblivious-looking Sumner sits on the right). Keitt was censured for his involvement, and resigned his seat in protest. After winning reelection to the House in 1858, Keitt called a Pennsylvania representative a “black Republican puppy” and then attempted to choke him, sparking a full-scale brawl in the chamber that ended only when a Mississippi congressman lost his wig. Image: Library of Congress.

A notorious loose cannon, New York Democratic Rep. Daniel Sickles murdered his wife’s lover (a US Attorney) in a public park across from the White House in 1859, and then became the first person in American history to walk free by invoking the “temporary insanity” defense. In a totally unrelated incident, Sickles lost a leg at Gettysburg, but found most of it and sent the bones (along with a card) to the Army Medical Museum in Washington. Image: Wikimedia Commons. 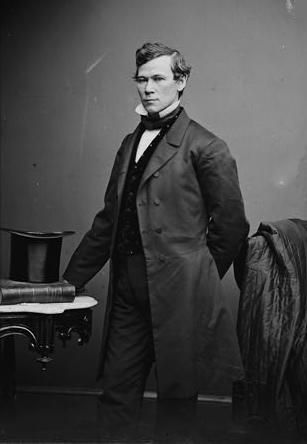 A staunch abolitionist, Wisconsin Republican Rep. John Fox “Bowie-knife” Potter earned his nickname in 1860, after an intense debate with Rep. Roger Pryor (D-Va.) over when it was approriate to shake one’s fist at a colleague. Pryor demanded satisfaction and Potter accepted—so long as Pryor agreed to his terms: “bowie knives and a dark room, and one of us to die.” Pryor called the proposal “barbarous”, to which Potter cleverly replied that he thought Pryor was “barbarous.” The duel fell through, and Potter (no relation to this guy) became a Republican icon, receiving dozens of blades as gifts, including a 6-foot-long, 31-pounder from the New England Cutlery Company. Photo: Wikimedia Commons.

More North-South antebellum violence, more fantastic beards. Pennsylvania Republican Rep. Galusha Grow’s beef, and near-duel, with Rep. Lawrence Branch (D-N.C.) stemmed from heated remarks made during a floor debate. Six congressmen (three on each side, all packing heat) showed up for a much-anticipated showdown in Maryland, including habitual offenders Laurence Keitt and Roger Pryor. They might have had a quorum if the police didn’t get there first. Image: Wikimedia Commons.

Failing to glean any valuable insights from his predescessor’s attack on Sumner, Kentucky Rep. Lovell Rousseau opted to use a rattan cane (rather than Brooks’ gutta-percha) in his 1866 assault on Iowa Rep. Josiah Grinnell. As the former Union general thwacked his rival, he unleashed a string of epithets, calling Grinnell a “damned puppy” and a “scoundrel.” The cane broke (Grinnell stayed largely intact), and Rousseau resigned, only to return to the House after winning a special election to fill his own seat. Photo: Wikimedia Commons.

Rep. Marion Zioncheck was, clinically speaking, insane. That explains the New Dealer’s erratic behavior—rows with DC police, driving on the sidewalk, accusing Vice President John Nance Garner of kidnapping his wife, and attempting to enter the White House with a bag full of empty beer bottles and ping-pong balls. Typical headline: “Zioncheck scales fence at hospital, flees into woods.” This Times article from 1936 pretty much summed up the Washington Democrat’s three terms in the House: “Zioncheck spent parts of the day in two guard rooms, emerged as underdog in as many scuffles with the officers and finally was free to go home to his four pet diamondback terrapins only after Representative O’Connor of New York had paid for him fines totalling $45.” Photo courtesy of Washington State University Digital Collections.

Before winning a seat in the House, California Republican Bob Dornan made a name for himself by flying to Martha’s Vineyard to personally reenact Ted Kennedy’s Chappaquiddick alibi, and burning Jane Fonda in effigy. As a congressman, “B-1 Bob” stayed on the offensive: In 1985, he was involved in a dust-up on the House floor in which he called Rep. Thomas Downey (D-N.Y.) a “draft-dodging wimp.” When Downey protested, Dornan grabbed him by the collar and said, “It’s good you’re being protected by the sergeant-at-arms. If I saw you outside, it’d be a different story.” Dornan later said he was only offering a bit of gentlemanly fashion advice: Downey’s tie “needed to be straightened.” Photo: Wikimedia Commons.

After being confronted for entering the Capitol without displaying her ID badge, Georgia Democrat Cynthia McKinney punched a police officer in the chest in 2006. She accused the Capitol cop of “inappropriate touching” and stopping her because she’s black. The Capitol police chief weighed in: “Anytime an officer does not know who the person is coming in the building, I direct them to stop that person. And even if you’re stopped, you’re not supposed to hit a police officer. It’s very simple. Even the high and the haughty should be able to stop and say, ‘I’m a congressman,’ and then everybody moves on.” Photo: Wikimedia Commons.

There hasn’t been a good Capitol Hill brawl for decades, but contemporary members of Congress aren’t above issuing the occasional threat of bodily harm. Rep. Don Young (R-Alaska) wins points for the time in 2007 he (strictly metaphorically, of course) threatened to chew off a piece of New Jersey Republican Rep. Scott Garrett: “If we continue this we’ll be called biting one another, very much like the mink in my state that kill their own. There is always another day when those who bite will be killed, too. And I’m very good at that.” He continued, “If that’s the case, let’s all just have a big donnybrook right here. I’m ready; I’m really ready.” Photo: Alaskans for Don Young.

By taking a page from his Tar Heel forebears, North Carolina Democrat Bob Etheridge helped end his political career when he played a little too rough with a pair of a camera-carrying GOP activists last June. After they approached Etheridge on the street and asked whether he supported “the Obama agenda,” the congressman knocked the cameraman to the ground, and grabbed his partner by the arm—and then the neck. Video of the attack went viral, and Etheridge, once seen as a shoo-in for reelection, lost a squeaker to “Mama Grizzly” Renee Ellmers. Photo: YouTube.