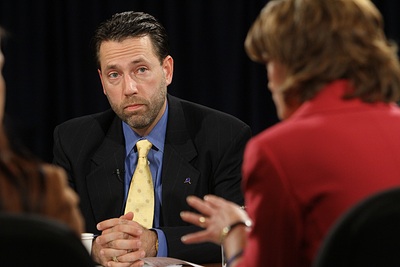 Joe Miller, Alaska’s GOP candidate for US Senate and a tea party darling, is taking his election battle to the courts. On Tuesday, Miller, who trails write-in candidate and incumbent Lisa Murkowski, filed a suit in federal court asking a judge to bar Alaska election officials from counting any votes for Murkowski that don’t spell her name correctly. Miller’s suit claims the only acceptable write-in names are “Lisa Murkowski” or “Murkowski,” and any write-in vote even slightly different should be discounted. In response to the suit, a Murkowski campaign manager told the Daily Press that the Miller campaign was “trying to discount as many votes as possible from Alaskans.”

What remains to be seen is if Miller’s suit is too little, too late. Alaska elections chief Gail Fenumiai says she’s planning to begin counting the 92,000 write-in ballots cast in last Tuesday’s Senate election, featuring Miller, Murkowski, and Democrat Scott McAdams, suggesting she won’t wait for Miller’s suit to play out. So far, Miller trails Murkowski by more than 10,000 votes, according to the Anchorage Daily News; McAdams is a distant third.

The fate of Miller’s suit, and thus that of his candidacy, hinges on what’s called “voter intent.” That means accepting minor misspellings of a write-in candidate’s name, provided it’s plainly clear which write-in candidate that voter intended to support. Here’s from more the Daily News on this brewing legal battle:

Lt. Gov. Craig Campbell, who oversees Alaska elections, has indicated that he will accept minor misspellings of Murkowski’s name as long as the “voter intent” is clear. “The courts have been very clear for the last 25 years that voter intent is important,” Campbell said in an interview this week with KENI radio host Mike Porcaro. “You do not want to disenfranchise voters over a technicality.”

But Van Flein, Miller’s lawyer, is arguing that nothing in state law allows for that kind of discretion. “The statute does not allow for the election board to weigh ‘voter intent,’ ‘voter feelings,’ or ‘voter hopes,’ ” Van Flein wrote in a letter to Fenumiai.

Here’s what the law says:

“A vote for a write-in candidate, other than a write-in vote for governor and lieutenant governor, shall be counted if the oval is filled in for that candidate and if the name, as it appears on the write-in declaration of candidacy, of the candidate or the last name of the candidate is written in the space provided.”

Miller’s lawsuit argues the state waited until this week—”the eleventh hour”—to release a written policy saying it would weigh voter intent in the counting process.

Consider Miller’s suit a Hail Mary pass to salvage his campaign, a highly unlikely one at that. If Alaska election officials do follow the “voter intent” idea, and Miller’s suit fails, we could see a winner announced in Juneau, where votes are currently being tallied, in the next day or two.