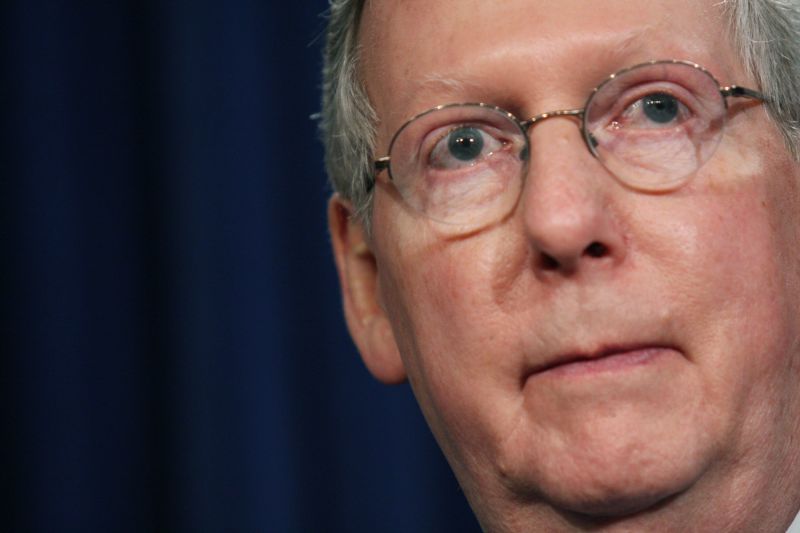 In the latest post-victory peroration by Republican honchos, Kentucky’s Mitch McConnell, the Senate minority leader, outlined on Thursday morning his vision of the way forward for the GOP before a friendly audience at the conservative Heritage Foundation. To save you some time, here’s the five-word synopsis: President Obama’s agenda must die.

McConnell devoted an ample chunk of his remarks at Heritage to reaffirming Republicans’ opposition to all corners of the Democratic Party’s plan, like health insurance reform, financial regulatory reform, and a slew of other initiatives. First, on health care, McConnell forcefully said, “We can and should propose and vote on straight repeal, repeatedly.” Knowing that any such repeal won’t make it out of the Senate, and even if it did, would be vetoed by Obama, McConnell added that Republicans will “also have to work in the House on denying funds for implementation and, in the Senate, on votes against its most egregious provisions.”

And when blocking potential legislation isn’t an option, McConnell went on, his party will make sure to stymie any other efforts to advance the Democrats’ agenda through other means. He mentioned blocking card-check proposals, which would allow workers to more easily unionize, from passing via the National Labor Relations Board; preventing the administration’s immigration reform ambitions from being realized through “administrative amnesty” and picking and choosing which immigration laws to enforce (or not); and blocking federal agencies from enacting energy taxes. And, of course, McConnell expressed his intent on blunting the effects of the Dodd-Frank financial reform bill, which he called “horrible” and named, along with the health care bill, as one of the worst bills in his 26-year Senate career.

Most of all, McConnell doubled down on his promise to make Obama a one-term president. As he told the Heritage crowd in his prepared remarks,

Over the past week, some have said it was indelicate of me to suggest that our top political priority over the next two years should be to deny President Obama a second term in office. But the fact is, if our primary legislative goals are to repeal and replace the health spending bill; to end the bailouts; cut spending; and shrink the size and scope of government, the only way to do all these things it is to put someone in the White House who won’t veto any of these things. We can hope the President will start listening to the electorate after Tuesday’s election. But we can’t plan on it.

Oddly, during the question-and-answer period, McConnell had a candid moment, seemingly contradicting himself by offering, “I don’t want the president to fail; I want him to change.” Mark it down as a rare slip for a man whose true intentions are abundantly clear.