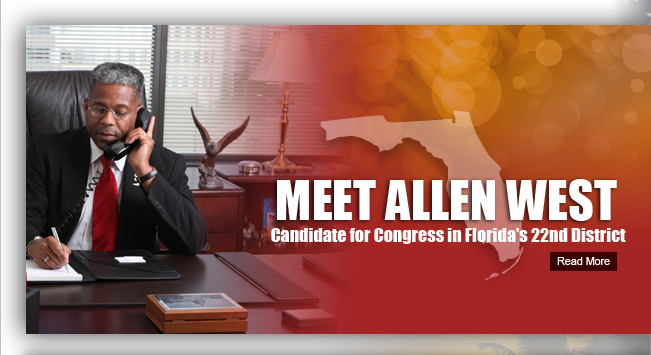 Meet your new congressman, America: Allen West (R-Abu Ghraib). Voters in Florida’s 22nd District did what voters all over Florida did yesterday: They chose a well-financed, tea party-talking, fire-breathing right-winger. In electing West—an Islamophobic ex-Army officer who was forcibly retired from the service for his way of making Iraqi prisoners talk—voters set a so-called “Jack Bauer” Republican on Easy Street for life. And yet the GOP’s other, better-educated Jack Bauer candidate—Ilario Pantano, whose anti-Islam, pro-rebellion rhetoric rivaled that of West—lost his race in an even redder district, North Carolina’s 7th. How?

Explaining Pantano’s loss isn’t hard, even on a banner night for GOPers. The former Marine—who avoided prosecution for pumping two Iraqis full of bullets under mysterious circumstances—couldn’t beat his odds. The N.C. 7th includes Fayetteville and Wilmington, and it’s only ever sent one Republican to Congress, for three years during Reconstruction. But that wasn’t Pantano’s only disadvantage: He was also seen as a carpetbagger, a graduate of Manhattan’s elite Horace Mann School and NYU and a former Goldman Sachs trader whose banking background probably didn’t sit well with the very tea-bagger demographic he sought to energize. According to Noah Schachtman, editor of Wired‘s Danger Room blog, was a childhood friend of Pantano’s who still considers him a New Yorker through and through:

His mother was a New York literary agent, though she now raises horses in North Carolina; his wife was a Jewish New Yorker and onetime model who posed for photographer Robert Mapplethorpe. Pantano never did drugs, but he loved to dance and loved the hot nightclubs of the nineties.

Not only that, but Pantano’s campaign wasn’t exactly a testament to the Marine Corps’ core values of honor, courage, and commitment. Politico showed how his campaign took to some selective editing of an NBC news segment to whitewash his military service in a campaign ad. Even Pantano’s Republican primary opponent, Iraq War vet Will Breazeale, thought Pantano’s “combat” strengths were weaknesses. “To shoot two unarmed prisoners 60 times and put a sign over their dead bodies is inexcusable,” he told the Daily Beast.

So much for Pantano. What’s far more puzzling is how West won the South. In fact, he didn’t just win: He beat incumbent Ron Klein by 10-point margin, far exceeding expectations. That should be concerning for Dems: Florida 22 is a majority female, well-educated (read: socially liberal) district, and it lies in some of the bluest parts of Florida—Palm Beach and Broward County. Which West might know if he actually lived in the district he just won.

So what happened here? Well, first of all, West developed a cult following among right-wing military vets, anti-immigration forces, birthers, and the like; it’s a personality cult that’s eerily similar to the one that buoyed West’s nemesis, Barack Obama, to the presidency two years ago. And it’s a cult that gives: West was the top money-getter of any GOP challenger in most of 2010, brandishing a high-profile endorsement from Sarah Palin, among others. Much of that campaign cash was donated by hardcore individuals across the country; for once, the tea party network had its mojo going.

The 22nd itself is also a heavily monied (read: fiscally conservative) district. Before Klein’s improbable four-year tenure, its longtime representative was E. Clay Shaw, a staid yacht-club Republican who was a friend of developers and business interests. So it makes sense that the district’s anti-tax, pro-corporate bias might poke through in an especially harsh midterm election cycle.

Almost. But you’d also think that West’s record of campaign-trail lies; his intolerance of tolerance; his inability to pay tax liens, homeowner’s fees, and credit cards; his tea party rebellion talk; and his Cheneyesque championing of a national security state would be a turn-off to country-club types in Boca and Fort Lauderdale. One doesn’t exactly envision them heedng West’s call “to stand up, to get your musket, to fix your bayonet, and to charge into the right.” (In the same speech, he said his candidacy boiled down to one word: “bayonets.”)

So what’s the matter with Florida? Maybe nothing. In 2012, West will have to account for his work on the Hill…and run against a still-popular sitting president in a blue corner of a battleground state…and convince his Clay Shaw-type GOP backers they got more than an extra from a Arnold Schwarzenegger-Jesse Ventura-Carl Weathers military action flick. He’s going to need more than a bayonet and a bag of money for that gunfight.