When the national climate bill crashed this summer in a flaming streak of senatorial ineptitude, climate hawks could take a little comfort in the progress that continued on the state level.

Ten northeastern states have been running an active cap-and-trade program for power plants that has produced modest greenhouse-gas cuts and raised $729 million for clean-energy programs. Two clusters of states in the West and Midwest have been inching toward their own regional cap-and-trade plans.

But then the election happened, bringing in a host of new governors and switching control of state legislatures, mostly from Democratic to Republican. What does it mean for regional cap-and-trade?

It means most of the action will happen on the coasts. Democratic victories in Northeastern states will probably keep that region’s program stable for the next few years. And California’s overwhelming ballot victory for its climate law provides a backbone for the Western program, which is scheduled to go online in 2012 even if only a few states follow through. In the Midwest, however, regional cap-and-trade is probably stalled out for the next few years, with the program’s original architects out of office and clean-energy-hostile Republicans taking charge in Wisconsin, Kansas, and Ohio.

Recent research from the World Resources Institute found that a combination of state efforts and regulation from the EPA could keep the nation roughly on track with President Obama’s Copenhagen emissions pledge, a 17 percent cut from recent levels by 2020. That’s not nearly what science requires, but it’s not nothing either.

The bigger promise of these programs is the beta testing they can do for a national system. Regional cap-and-trade initiatives can work out kinks and develop best practices. Just as important, they provide a rebuttal to the doomsayers who have made cap-and-trade a toxic phrase in national discourse.

“People don’t understand [cap-and-trade] well, so it’s relatively easy for those who don’t want it to happen to sow fear where there is a vacuum of real, working experience,” said K.C. Golden, policy director at the advocacy group Climate Solutions. “It’s easier for people who want it to happen to build the politics for it when there’s success to point to.”

In the two years that the Northeast’s program has been up and running, there have been no spikes in electricity rates and no Enron-style market corruption, according to independent watchdogs. Also, Christmas has not been cancelled, Sharia law has not been imposed, and kittens have not drowned.

One public energy company that’s required to buy emissions permits, New Jersey’s PSEG, has been pleased with the program and has not lost business to neighboring Pennsylvania, according to Vice President of Policy Eric Svenson. “It’s worked out better [than our expectations],” he said. “It’s gotten people comfortable with the concept of cap-and-trade for carbon … We’d like to see them stay the course.”

Here’s a closer look at the future of the three regional programs and how they might serve as test labs for a national plan. 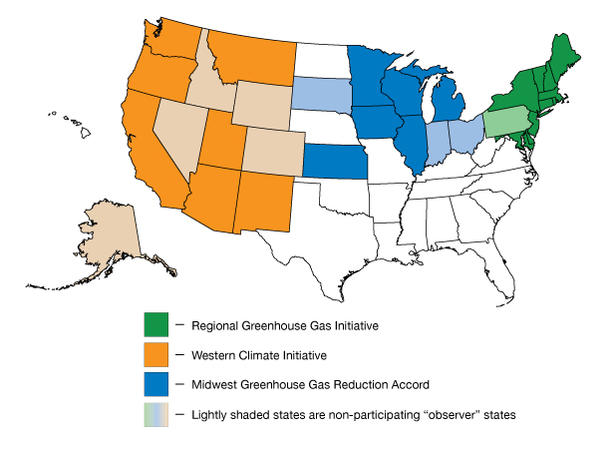 The Regional Greenhouse Gas Initiative (RGGI, pronounced “Reggie”), which involves Northeastern and mid-Atlantic states, is the nation’s only active cap-and-trade program, although it’s limited in scope by addressing only power plants—about 23 percent of total emissions from the area.

Democratic gubernatorial victories in New York, Massachusetts, Maryland, Vermont, New Hampshire, and Connecticut mean those states should remain participants. Rhode Island Independent governor-elect Lincoln Chafee is likely to support RGGI, based on his Senate record. Pennsylvania governor-elect Tom Corbett (R) isn’t likely to join in, but his coal-heavy state was only an “observer” of the accord even under a Democratic governor.

The biggest uncertainties come from New Jersey Gov. Chris Christie (R) and Maine governor-elect Paul LePage (R). Christie has shown he’s will to block forward-looking regional investments by killing a major rail-tunnel project last month, while LePage is a climate skeptic who opposes his state’s clean-energy goals and has called for abolishing the federal Department of Energy and EPA on radio talk shows.

Both have been pushed to drop out of RGGI by Americans for Prosperity, a Koch Industries-funded astroturf group. LePage hasn’t spoken about RGGI, but he did sign AFP’s “No Climate Tax” pledge, suggesting he may be sympathetic.

Christie also has not responded publicly to AFP’s campaign. Svenson of PSEG, New Jersey’s largest utility, said he hopes the governor makes his decision “in a very deliberative manner,” as pulling out would disrupt businesses’ long-term planning. Because both states joined RGGI with the support of their legislatures, it’s unlikely the governors would be able to pull out on their own.