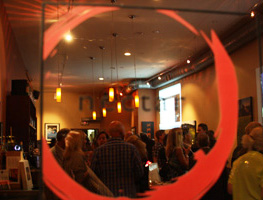 On the evening that 80 percent of San Francisco voters elected Nancy Pelosi, the town’s few Republicans hunkered down in Marina District bar Eastside West to watch the national results roll in. A light-up “Don’t Tread on Me” pin blinked red and blue from one coat lapel. “This bar is an island of sanity!” shouted one GOPer, waving his arms wildly near an empty beer glass. “In a peninsula—a peninsula of…” his voice trailed off.

He meant: A peninsula of almost no Republicans. Of every ten San Francisco voters, about five are registered Democrats. Three decline to state their political affiliations. And less than one is Republican. Less than one? Is that even possible?

It’s not easy being red in the Bay Area. One drinker admitted that he avoided putting up GOP bumper stickers, too worried that his car would be keyed. The young Stanford grad, now a marketing professional, refused to give his name for fear a potential employer might someday see this story online and nix him in the hiring process. In San Francisco, he said, he’s much more likely to talk about his Catholic faith than about his politics.

Paranoid, maybe? “[Liberals] should go to West Texas and try to live there,” he said. “They’d probably feel the same way I do.”

A few blocks away at John Dennis’ election night party, the bar served wine instead of beer; the crowd looked a good 20 years older.

The disposition there, despite the unconventional Republican’s slim-to-none chances of defeating Pelosi, was a bit more upbeat. Lisa Rossetti, the fundraising director for Dennis’ campaign, saw the national turnover as a mixed bag. “On the one hand I’m thrilled, on the other hand I’m skeptical,” she said. “If they’re gonna be like the guys who came in with [Newt] Gingrich, we’re done. We’ll need a new party.”

Like Dennis, Rossetti wanted to do away with DADT and supported pot legalization. But living here hasn’t shaken her fears of skyrocketing federal debt or her resistance to government encroachment, which is why she still votes Republican (most of the time). In Dennis, she said she’d finally found a candidate who spoke her particular political language. 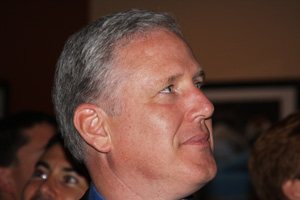 An hour or so after the trays of mushroom profiteroles had made their rounds, the candidate in the requisite red tie arrived. Two TV screens flashed red state victories on Fox News’ election night segment, but would not—everyone in the room already knew—light up in his favor.

Still, Dennis said he’s had a lot of good conversations with local liberals. And he has advice for those who might face similar straits should the national mood shift again: “Find your libertarian mojo.”