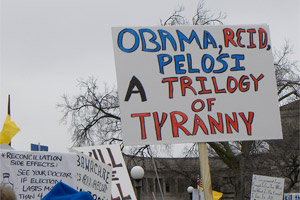 In the months leading up to the midterm congressional elections, the tea party movement managed to tamp down on its internal divisions in pursuit of a shared goal of defeating Democrats. But with the elections over, the movement’s fault lines are starting to show, and tensions between the tea party’s social conservative and libertarian wings are poised to explode into an all-out civil war.

“It’s easier for them to be united around the political agenda of defeating Democrats than it is going to be agreeing on a legislative agenda,” observes Peter Montgomery, a senior fellow at the liberal advocacy group People for the American Way.

The most recent example of an emerging schism: Some tea party activists have linked arms with the gay conservative group GOProud to demand that the new GOP congressional leadership stick to the tea party’s core fiscal issues and not those of evangelical Christians. They sent a letter to House Speaker-in-waiting John Boehner and Senate Minority Leader Mitch McConnell imploring them “to resist the urge to run down any social issue rabbit holes in order to appease the special interests.” They write:

Already, there are Washington insiders and special interest groups that hope to co-opt the Tea Party’s message and use it to push their own agenda—particularly as it relates to social issues. We are disappointed but not surprised by this development. We recognize the importance of values but believe strongly that those values should be taught by families and our houses of worship and not legislated from Washington, D.C.

The letter represents a direct challenge by the tea party’s libertarian faction to the GOP’s historic fealty to its base of evangelical Christians. Represented in the GOProud letter by Andrew Ian Dodge, a Maine-based coordinator for the Tea Party Patriots, the tea party libertarians believe the movement has been successful in large part because it has avoided divisive social issues like abortion and homosexuality. They want the movement and the leaders it helped elect to Congress to stay focused on the limited agenda it set out from the beginning. Joining up with a gay Republican group certainly drives that point home. But it also promises to ruffle some feathers—and not just those of the establishment social conservatives who’ve been on the outside of the movement looking in.

According to a recent poll, only 18 percent of tea partiers support gay marriage, a figure that puts them well to the right of most voters. About half of all tea partiers also consider themselves part of the Christian conservative movement, whose members aren’t fans of GOProud. Earlier this year, several evangelical groups went so far as to boycott the annual Conservative Political Action Conference simply because GOProud was allowed to sponsor a small table in the exhibit hall.

The tensions within the Tea Party Patriots are a microcosm of those roiling the movement as a whole. Even as one faction of the group is now calling for social issues to be left to the family and the church, another is actively courting social conservatives. In September, for instance, members of the group’s national leadership attended a meeting of high-powered social conservatives in California, attempting to hit them up for donations.

A few weeks earlier, Mark Meckler, TPP’s national coordinator, appeared at a DC conference sponsored by Ralph Reed’s Faith and Freedom Coalition. There, Meckler told the religious right’s assembled foot soldiers that he believed the real animating force behind the tea party movement was opposition to the separation of church and state and the “removal of God from the public square.” One of the group’s newest board members is the former Oklahoma Republican congressman Ernest Istook, a stalwart of the Christian right.

Recently, Meckler has been throwing out talking points from the culture wars. At a post-election press conference in DC, he declared, “All civilizations and empires have fallen because their cultures became decadent, We need to lift up conservative culture, family values, and wholesome things by supporting conservative musicians, writers, artists, and producers.”

Meckler and TPP have even taken up the old strategy agenda of the Christian Coalition—that of fighting for conservative values not through Congress or elections, but in Hollywood, public schools, and the courts. Meckler laid out more detail about the group’s 40-year-plan for world dominion in a video address to a local tea party group. (Update: You can watch the video here.) In it, according to a California blogger who saw the video, he said that the group’s goals include ridding the schools of teachers who are filling the heads of innocent children with progressive ideas and rating judges, an old idea employed by social conservatives fighting abortion and school prayer in the courts. Apparently, TPP also plans to take on popular culture through boycotts, an old staple of groups like the virulently anti-gay American Family Association.

Dodge says he can’t speak for Meckler and his recent interest in religious issues. He notes that the letter he co-authored with GOProud was not an official TPP position. But Dodge does believe that most tea partiers aren’t actually focused on cultural issues, but rather care primarily about fiscal ones. That’s what the tea party should remain focused on, he says. Dodge was in Washington this weekend for TPP’s “freshman orientation” conference in which tea party leaders met with incoming members of Congress, and he says that his letter was mostly greeted with a favorable response by fellow tea party coordinators who came for the meeting.

Still, it’s no coincidence that the tea party movement’s favorite member of Congress is Sen. Jim DeMint (R-S.C.)—who is a fiscal hawk, to be sure, but who also thinks that gays shouldn’t be able to teach in public schools (a position that GOProud’s board president Christopher Barron points out is the opposite of the one Ronald Reagan took 30 years ago). The tea partiers and the social conservatives are often one and the same, and while the libertarian wing has been pretty vocal of late, they are still vastly outnumbered by the evangelicals. Ultimately, the anti-gay, anti-abortion religious activists are likely to overcome the efforts of their libertarian counterparts to keep Congress focused on fiscal issues rather than policing people’s bedrooms. In the end, the tea party movement may well end up a newer, smaller version of Reed’s Christian Coalition—one that doesn’t hold the broader appeal to independent voters that the tea party movement initially did.

All of that gives GOProud, at least, long odds of finding a real constituency among the movement at large. But Barron is hopeful and combative, qualities he’ll need to prevail in this fight. He says, “Here’s a question for Jim DeMint: Who put him in charge of anything? The tea party movement has been grassroots driven. We understand that the tea party movement is an incredibly diverse movement united around the idea of getting government out of our business.”

By joining with GOProud, the libertarian-minded tea partiers are trying to save their movement, not fracture it, says People for the American Way’s Montgomery. “They realize that once they get into the social issues, it will divide the movement. This is their shot across the bow to the religious right,” he says. Let the battle commence.