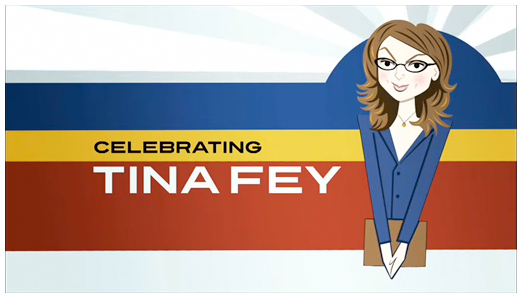 So Tina Fey gets this award Sunday night, the Kennedy Center’s Mark Twain Prize for American Humor, which is kind of a big deal. In fact, they wrap an entire PBS Kennedy Center TV special around her, with special guests and happy clapping crowds. And when she gets this award, she gets to talk onstage, as awardees are wont to do. And according to Joe.My.God. and the Washington Post, here’s part of what she says:

And, you know, politics aside, the success of Sarah Palin and women like her is good for all women—except, of course, those who will end up, you know, like, paying for their own rape kit ‘n’ stuff. But for everybody else, it’s a win-win. Unless you’re a gay woman who wants to marry your partner of 20 years—whatever. But for most women, the success of conservative women is good for all of us. Unless you believe in evolution. You know—actually, I take it back. The whole thing’s a disaster.

Except if you were watching the thing on PBS Sunday night, you didn’t see or hear any of that. According to the Post‘s Paul Farhi: “The part about rape kits and evolution was gone, leaving only Fey’s more harmonious—and blander—comments about Palin and politics: ‘I would be a liar and an idiot if I didn’t thank Sarah Palin for helping get me here tonight…'”

For its part, PBS told Farhi the selective editing “was not a political decision…We had zero problems with anything she said”:

But with the 90-minute show running about 19 minutes long after the taping Tuesday night, a few things had to give, Kaminsky said. “We took a lot out,” he said. “We snipped from everyone.”

Uh huh. Anyway, a video of Fey’s full acceptance speech is below; skip to about 12:30 for her invective on Alaskan dystopia. Oh, and by the way, also on TV Sunday? The premiere of Sarah Palin’s Alaska on TLC, which hooked in 5 million viewers. Apparently she illegally molested a bear with her fishing tackle. But that didn’t get edited out.