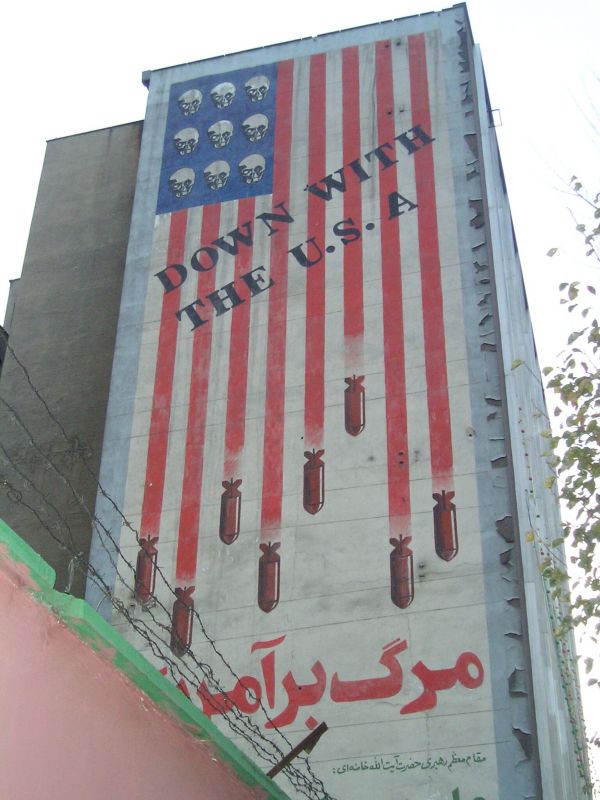 Amid all the serious intrigues and statecraft revealed in “Cablegate,” WikiLeaks’ slow but steady data dump of 251,287 internal US State Department communications, there’s 09STATE47326…a strange cable dated May 8, 2009, that seems to indicate Secretary of State Hillary Clinton couldn’t read the writing on the wall—literally—in Iran.

“WASHINGTON ANALYSTS ARE HIGHLY INTERESTED IN CONFIRMING A REPORT REGARDING AN IRANIAN GOVERNMENT DECISION TO REMOVE ANTI-AMERICAN SLOGANS AND ART FROM TEHRAN’S BUILDINGS,” the cable’s author wrote (on Clinton’s behalf) to Iran experts posted around the globe. “THESE CHANGES COULD REPRESENT AN IMPORTANT INDICATOR ON TEHRAN’S VIEWS TOWARDS ENGAGEMENT WITH THE US AND FURTHER INFORMATION ON THE EFFORT AND GOVERNMENT OFFICIALS INVOLVED IN THE DECISION, POSTS’ TIME AND RESOURCES PERMITTING, WOULD BE VERY VALUABLE.”

The cable then goes on to ask a series of critical questions about the alleged Iran graffiti program that Clinton wanted answered: “WHAT, IF ANY, ANTI-AMERICAN SLOGANS AND MURALS ARE CURRENTLY BEING REPLACED IN TEHRAN, INCLUDING THOSE IN AZADI SQUARE AND THE “DOWN WITH AMERICA” MURAL ON KARIM KHAN AVENUE? WHAT, IF ANY, PLANS ARE THERE TO REPLACE SUCH MURALS?…IF THERE ARE PLANS TO REPLACE THE MURALS, WHO AUTHORIZED THEM? WHAT ARE THE REASONS FOR THE MURAL REPLACEMENT PLAN?”

Tehran’s anti-US murals are the stuff of legends, from the former American embassy (now a Revolutionary Guard headquarters) to street scenes like the one pictured above. And if they were about to go away as a result of mass government action, that could be a useful bellwether. Too bad the State Department hadn’t realized its alert was based on bad information.

If the secretary of state’s request garnered any replies, they’re not included in the latest WikiLeaks batch (so far, they’ve only released text from 220 of the cables they have). But had she read the original source of the reports on Iran’s new-mural program, Clinton was bound to have been disappointed. The leaked cable cites a news report about muralist Mehdi Qadyanloo from Agence France Press (as well as one from a US outlet called “Iran Times,” which recycled—some might say plagiarized—the AFP story). That AFP report makes it clear that Tehran’s plan to replace some old anti-US murals was hardly inspired by a thaw in international relations:

“The plan is to make the crowded, traffic-congested, polluted capital of Iran lively with lasting and universally understood murals,” said Mohammad Reza Sharif Kazemi, the man behind the municipality’s beautification drive…”The nation is progressing and we have to give a new message for a new generation. We have to show the world the depth of Iranian culture.”

And what was replacing the old imagery of satanic stars and stripes? Glad you asked:

One such mural by Qadyanloo is on the Shahid Sattari highway to Tehran’s old Mehrabad airport…It shows the “Iranian war heroes and passengers killed when the airliner was shot down by US missiles in the Persian Gulf in 1988 over the Strait of Hormuz towards the end of the Iran-Iraq war,” Qadyanloo said…

One theme-based mural landscape in Vanak Square shows people walking towards a rich green field under a clear blue sky, contrasting with the reality of a polluted city of around 12 million Iranians.

Hardly an improvement in US-Iranian relations or reality-based governing.

In any case, only two months after Clinton’s office distributed its cable, little doubt remained that Iran’s government would retain its iron-fisted orientation toward Western and internal dissidents. Iranian President Mahmoud Ahmadinejad would “win” reelection, prompting a round of street protests and brutal government crackdowns. Beset by war-hungry hardliners on the right and pro-engagement peaceniks on the left, Clinton’s and—President Obama’s—Iran strategy has foundered ever since. But Mehdi Qadyanloo’s probably got enough work in Tehran to last him for decades.