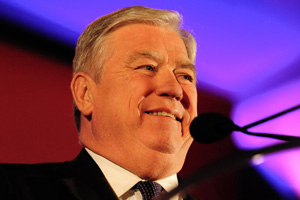 Obama’s election was heralded as the beginning of a new era of “post-racial” American politics—a notion that seems to have been scuttled as quickly as the idea that his presidency would end partisan bickering. The backlash against Obama and his Democratic allies has sped the rise of a right-wing fringe deeply suspicious of immigrants and minorities. While immigration reform stayed on Capitol Hill’s backburner, Arizona’s punitive immigration law set off a political firestorm that spilled over into the 2010 elections—with some decidedly ugly outcomes.

Acknowledging its image problem, the Republican Party recruited minority (and female) candidates in droves and managed to achieve some historic, ceiling-shattering victories in the midterms—electing the nation’s first female Hispanic governor, the first female Indian governor, and South Carolina’s first black Republican member of Congess, among other accomplishments. But even the party’s own suffered some withering race-based attacks on the 2010 campaign trail. As the next election approaches, the GOP could face even more of a conundrum when it comes to race, immigration, and identity politics—squeezed between a right-wing fringe that’s taken hold of its conservative base and a growing minority electorate.

Through it all, the growth of polarized partisanship and an increasingly reactive, scandal-hungry media culture has amplified fringe voices and stigmatized public figures who cross the line. Inopportune slips of the tongue ricocheted instaneously from the Twitterverse to the nightly TV networks; race-baiting campaign ads circulated just as quickly, generating an equally heated backlash. Here’s a look back at some of the most racially insensitive moments that dominated the 2010 political season:

1) When it came to race-baiting in 2010, it was nigh impossible to top tea party fave Sharron Angle. Characterizing her opponent Harry Reid as a friend of dark-skinned, Hispanic gangbangers and illegal border-crossers who swarmed the border, Angle’s anti-immigrant campaign spots topped many a list as the most racist ads of the year. Angle tried to repair some of the damage by speaking to a group of minority high-school students—and only dug the hole deeper by telling them: “I don’t know that all of you are Latino. Some of you look a little more Asian to me.”

2) Even the most die-hard, fiscally conservative Republicans weren’t immune to racially motivated attacks. During the South Carolina gubernatorial primary, state Sen. Jake Knotts lobbed a racial slur at Indian American (and now governor-elect) Nikki Haley. “We’ve already got a raghead in the White House, we don’t need another raghead in the governor’s mansion,” he joked.

3) The birther conspiracies surrounding Barack Hussein Obama have now thoroughly infected the conservative body politic. But perhaps the most infuriating attempt to cast the nation’s black president as a nefarious, untrustworthy foreigner came from Dinesh D’Souza, the conservative commentator who concluded that the guiding philosophy of Obama’s presidency has been “Kenyan anti-colonialism” in an essay for Forbes. The American Prospect‘s Adam Serwer had one of the best takedowns of D’Souza’s “birtherism lite,” describing the writer’s attempt to launder racism of the right through a pseudo-intellectual filter.

4) It was a crowded field for extremist kooks who found their way onto 2010 campaign trail. But Ohio GOP House candidate Rick Iott may have left a more memorable impression than most for dressing up in a Nazi uniform to participate in World War II reenactments. Iott denied sympathizing with Nazis or harboring anti-Semitic sentiments, but he staunchly defended his Hitler-inspired dress-up: “I don’t see anything wrong about educating the public about events that happened.”

5) The few more moderate Republicans running in high-profile races were pressed to defend the increasingly anti-immigrant policies of their party—particularly if they themselves were minorities. During his (ultimately successful) run for governor, Mexican-American Brian Sandoval (R-Nevada) provided this forehead-smacking response when asked whether he would be concerned about racial profiling under Arizona’s immigration law: “My children don’t look Hispanic.” After first denying the comment, Sandoval tried to backpedal furiously: “If I did say those words, it was wrong and I sincerely regret it. I am proud of my heritage.”

6) Scandal-tainted Sen. David Vitter (R-La.) can hardly boast of having a squeaky-clean record, and he didn’t do his reputation any favors by running one of the most tasteless ads of the 2010 cycle. Another anti-immigrant jamboree, the ad shows “a gang of shady Mexicans sneaking through a fence, being greeted by a welcome sign in both English and Spanish, an oversized novelty check giving them ‘a lot of taxpayer money,’ and a limousine to ride them off in style,” as Talking Points Memo sums up. The spot concludes: “Thanks to Charlie Melancon, it’s no wonder illegals keep coming, and coming…” All but one of the purportedly victimized Americans in the ad appears to be white.

7) Republicans weren’t the only ones to spawn an outcry over race this year: California Democratic Rep. Loretta Sanchez landed in hot water in her reelection race against Republican Vietnamese American Van Tran by declaring that “the Vietnamese” were after her seat. “The Vietnamese and the Republicans are, with an intensity, trying to take this seat from which we have done so much for our community—to take this seat and give it to this Van Tran, who is very anti-immigrant and very anti-Hispanic,” Sanchez told Univision. Sanchez tried to explain that she was referring to the “Vietnamese community” bent on defeating her, but her apology didn’t hold much water. Though Sanchez managed to survive the midterms, she faced a much bigger scare at the polls than expected.

8) New York had more than a dose of cringeworthy moments with Carl Paladino winning the Republican gubernatorial nomination. But the state did have one political hopeful who managed to top Paladino’s email forwards of bestiality and racist Obama jokes. Republican Jim Russell, who challenged Nita Lowey (D) for her House seat in the New York City suburbs, had penned a 2001 essay that lambasted interracial marriage and racial integration, as well as celebrating the anti-Semitic ideas of T.S. Eliot. Parents, Russell wrote, need to teach their children “appropriate ethnic boundaries” for marriage and socializing. The New York GOP hurriedly tried to dissociate themselves from Russell campaign, but they didn’t succeed in forcing him off the ballot.

9) Speaking of throwbacks to a pre-Brown v. Board of Education era, Governor Haley Barbour may have scuttled any chance he had of a presidential bid by praising an infamously racist organization in the South. “You heard of the Citizens Councils? Up North they think it was like the KKK. Where I come from it was an organization of town leaders,” he told the Weekly Standard. The real story? “The Citizen Councils did everything they could to preserve racial supremacy, specializing in economic intimidation of citizens who tried to exercise the right to vote or tried to send their children to previously all-white schools,” one history professor told The Daily Beast. Barbour’s blind spot made it clear that at least one wing of the GOP, at least, has yet to shed the deep-seated racism of the South.

10) Amid all the racist flamethrowing of 2010, politicians managed to achieve a bipartisan consensus when it came to one boogeyman. China-bashing profilerated on both sides of the aisle as candidates blamed the ascendant superpower for America’s economic woes, as Salon‘s Adam Hanft explains. Democratic Senate candidate Joe Sestak (D-Pa.) attacked his opponent Pat Toomey as an outsourcing “job-killer” who was even willing “to work for a Hong Kong billionaire who wanted to help the Chinese economy…Maybe he ought to run for Senate—in China.” Incumbent Rep. Zack Space (D-Ohio) similarly slammed his opponent Bob Gibbs as free trader who “wants to increase THEIR standard of living.” Space’s ad concludes sarcastically: “As they say in China, xie xie Mr. Gibbs.” West Virginia Republican hopeful Spike Maynard also piled on: “It’s on our jeans. Even children’s toys. Made in China.” Though the China hatefest ave candidates a handy scapegoat, it didn’t pay off in the end: Sestak, Space, and Maynard all lost in November.