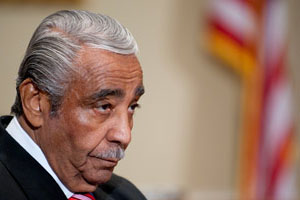 Save for expulsion, it was the harshest punishment Congress could dole out. After being found guilty of 11 ethics violations by the House Ethics Committee, Rep. Charlie Rangel’s congressional colleagues voted overwhelmingly on Thursday to censure the Harlem Democrat for improper financial disclosures, fundraising violations, and other misdeeds.

Rangel protested his punishment to the very end, and his allies in the Congressional Black Caucus (CBC) rose to his defense. Now some of Rangel’s staunchest supporters have resolved to go after the independent panel that dredged up the most damning evidence against the 80-year-old congressional veteran, the Office of Congressional Ethics (OCE). As more of their colleagues come under scrutiny, some CBC Democrats say they will even consider teaming up with the incoming GOP House majority to gut the ethics panel—or even eliminate it entirely.

Back in the spring, a group of twenty CBC members signed onto a resolution to rein in the OCE and curtail its authority to make investigations public, arguing that the office was destroying political reputations and victimizing black lawmakers. But soon they may have the chance to do more than just neuter the OCE. Having vocally opposed the creation of the panel, incoming House Speaker John Boehner and other top Republicans are quietly discussing ways to kill the OCE when it comes up for mandatory reauthorization next year—and it looks like at least a handful of Democrats could be on board.

Among them are CBC member Rep. William Lacy Clay of Missouri, who told Mother Jones: “If the decision were up to me, I would not reauthorize it—it’s so unprecedented and untraditional in the history of this institution. It’s duplicitous, it’s a waste of taxpayer money…I don’t see a need for it.” When asked whether simply reforming the office would suffice, Clay quashed the notion: “There should be no place for it here in this institution.”

Another CBC member, Rep. Marcia Fudge (D-Ohio), introduced the resolution to curb the OCE’s authority. Now the Democrat says she is “open” to shuttering the independent panel in the next Congress. “All options are on the table.”

At first glance, Republicans on Thursday appeared to support the investigations into Rangel’s misdeeds as a shining example for Congress’ future. Speaking before the House, Rep. Michael McCaul (R-Tex.), the ranking member of the House subcommittee that investigated Rangel, called his censure a “rare and historic” occasion that would mark “a new era of trust and accountability”; he warned that “the very credibility of the House of Representatives” was at stake. But even Republicans who voted to censure Rangel raised concerns about about the investigatory body that first brought the accusations to light. Rep. Jason Chaffetz (R-Utah) called the House’s current ethics procedures “terribly confusing,” citing the existence of both the independent OCE and the House Ethics Commitee, which is compromised of sitting House members. “There are legitimate questions about having two different ways to tackle the whole ethics issue,” Chaffetz said in an interview. “So I think we need to dive into that.”

“Killing it…could be done without leaving any fingerprints. No up-or-down vote. No grand speeches. No fanfare.”

Though Boehner has demurred from talking about it publically, there are widespread media reports that the Republican leadership is thinking of eradicating the office in the next Congress, having opposed the OCE from its creation. He’ll have the first opportunity to do so on January 5, when the House Republican conference approves the rules for the next Congress, which the Speaker himself puts forward. This method—as opposed to a potentially fractious funding fight—is the most inconspicuous way to go, said Meredith McGehee, policy director of the Campaign Legal Center. “Killing it…could be done without leaving any fingerprints. No up-or-down vote. No grand speeches. No fanfare.”

Unlike the bipartisan House Ethics Committee—which keeps ongoing investigations under wraps—the OCE has far more leeway to make its inquiries public. Democrats had intended for such measures to increase transparency and accountability when they created the panel in 2008 as part of a sweeping ethics reform package that followed the corruption scandals surrounding lobbyist Jack Abramoff, Rep. Tom DeLay, and other Republicans. The non-partisan, independent panel has doggedly pursued investigations based on public information, press accounts, and even anonymous tips from the public. Based on referrals from the OCE, the House Ethics Committee has taken an unprecedented number of disciplinary actions against sitting members—a crackdown that good-government groups have applauded.

But the panel’s critics argue that the OCE has overreached—and some CBC members believe that black members have been disproportionately targeted. Rep. Maxine Waters (D-Calif.), another senior black Democrat, is facing a “trial” by the House Ethics Committee after the OCE accused her of violating conflict-of-interest rules by helping a bank in which her husband owned at least $250,000 in stock. While Republicans have also come under scrutiny, the most high-profile cases have involved CBC members.

In an interview with Mother Jones, Fudge argued that the OCE has allowed investigations to go forward on flimsy evidence. As a result, members have been sullied by the mere implication that they were under investigation, even if the charges were baseless. “For someone to just arbitrarily read a newspaper, get a phone call, with no documentation, nothing to support an investigation and just to start to investigate a member—I think goes way, way beyond what is fair, what is just, what is right for members of this body.” Clay added that the House Ethics Committee has proven itself capable of carrying out its own investigations, whereas the OCE has “allowed anyone with an ax to grind with a member to file a complaint.” Democrats outside the black caucus have begun to air their concerns as well. “We lose some of our Constitutional rights—they’re free to investigate without telling you what they’re looking into,” said Rep. Raul Grijalva (D-Ariz.), who wants to reform the OCE to “fully extend notification and due process.”

Until recently, the most vocal opponents of such ethics reforms were Republicans, who argued that the new procedures were onerous and vindictive. But some of the OCE’s fiercest Democratic critics now suggest that their colleagues shouldn’t be afraid to stand with the GOP to oppose the office. “I don’t think it’s a partisan issue, it’s an institutional one,” said Clay. “It’s an issue that you need to be courageous on.” Another CBC member, Rep. Hank Johnson (D-Ga.), also acknowledged that Republicans had reasonable criticisms of the panel. “It’s not just the black caucus that is concerned about the investigatory power of this committee,” he said. “It’s a number of others, including Republicans… CBC members have been the victims of it, but others understand that they too can be victimized. It’s not just a CBC problem.”

The OCE’s defenders fear that even a small amount of Democratic support would mean certain death for the office, which Tom Fitton, president of the conservative-leaning watchdog Judicial Watch, calls “the only major reform to the House ethics process in a generation.” If even a handful of CBC Democrats lobby to gut or eliminate the OCE, it would give the GOP the ability to claim the effort has bipartisan support. “It would provide Boehner and the Republicans with plenty of cover,” said Craig Holman, a lobbyist for Public Citizen and a staunch defender of the ethics office.

Such defiant Democrats would also risk major blowback for siding with Republicans to kill a major pillar of ethics reform. And some CBC members are wary of aligning themselves too closely with the GOP, whose members have frequently been accused of skirting ethics laws to collude with lobbyists and other deep-pocketed interests. In the lead-up to the midterms, even Republicans remained mum on the OCE issue for fear of polluting their message to voters that they intended to clean up Washington.

But while Rangel’s fall from grace has spurred some of his closest allies to demand change, the CBC is not united on their plan of action. Emerging from the Thursday vote, Rep. Sheila Jackson Lee (D-Texas) called Rangel’s censure “an injustice.” However, she said she supported the continuation of the OCE and cautioned against rushing to judgment against the body: “Let the dust settle… No precipitous answer should be given now. I believe the institution should be preserved, and we should have it reviewed.” Even Waters and her chief of staff have yet to denounce the OCE, noted Public Citizen’s Holman. And the very public condemnation of Rangel, as well as Waters’ impending trial, could make it tough for many other Democrats to risk publicly criticizing the ethics panel.

Killing off the ethics office is risky for the Republicans, too, who could face the wrath of the tea party right in the process. The Ohio Tea Party has already warned the GOP against going after the OCE, defending the panel for bringing greater transparency to Washington. Though the GOP might be able to gain greater traction by having the CBC on board, Republicans also risk dragging the debate out into the open if they embrace such bipartisan support. Having issued the most vocal objections to date, CBC critics won’t mince words or shy away from making their case against the ethics panel. “Throw the baby out,” Clay said.