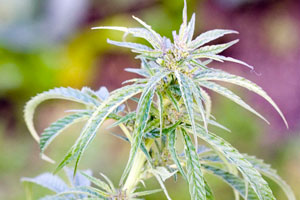 In the past month, 21 percent of high school seniors smoked pot, while just 19 percent lit up a cigarette. That’s according to the National Institute on Drug Abuse’s (NIDA) annual Monitoring the Future survey, released yesterday. The LA Times reports that it’s the first time this has happened since 1981.

But while the Times called the findings a “victory for public health campaigns aimed at stamping out cigarette smoking among teens,” don’t expect the FDA to adopt a pot leaf for any of its proposed anti-cigarette warning labels. The survey, which also questioned 8th and 10th graders about their illicit drug habits, noted a “significant” rise in daily marijuana use across all three grades.

In a press release, NIDA director Nora Volkow said the developing brains of pot-smoking teens placed them at “particular risk… Not only does marijuana affect learning, judgment, and motor skills, but research tells us that about 1 in 6 people who start using it as adolescents become addicted.”

Obama drug czar Gil Kerlikowske, in the same press release, called the survey’s findings “disappointing.” He made an apparent reference to Prop 19

The National Organization for the Reform of Marijuana Laws begged to differ. In a blog post yesterday, it blamed Kerlikowske’s “failed policies” of prohibition and argued that no state that has legalized medical marijuana has seen a jump in youth pot use. (At a Washington press conference, Kerlikowski said, somewhat incorrectly, “Calling marijuana ‘smoked medicine’ is absolutely incorrect.”)

In any case, NIDA wasn’t even encouraged by the alleged “victory” against Big Tobacco. The decline in teen cigarette use “has stalled in all three grades after several years of marked improvement,” its press release said, and teens are increasingly smoking cigars and hookahs. Hookahs!

Also of note: The survey asked about the use of the somehow-still-legal (in most states) herb salvia, which has been met with fresh ire lately after pop starlet Miley Cyrus was caught smoking it from a bong last month. Salvia, which can bring about uncontrollable giggle-fits and the potential for short-lived but intense, otherworldly hallucinations, was reportedly sampled by about 6 percent of high school seniors this year and the year before.