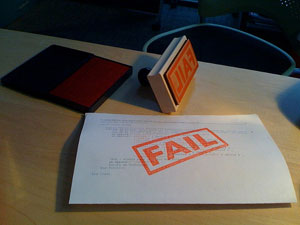 Sometimes I wonder how the public can still be so confused about global warming. But reading the news sometimes, it’s really fairly obvious. Take, for example, today’s top candidate for most misleading headline of the year, from the Telegraph: “Cancun climate change summit: glaciers increasing despite climate change.”

Holy counterintuitive, Batman! But wait—that’s not actually what the article, or the report it refers to, really says. Good thing you only have to read to the second paragraph to get the real story:

However, overall ice and snow on mountains has been retreating since the industrial age, according to scientists from around the world.

In some regions, it is very likely that glaciers will largely disappear by the end of this century, whereas in others ice cover will persist but in a reduced form for many centuries to come.

The report, released yesterday at the Cancun climate talks by the United Nations Environment Program, finds that glaciers in Patagonia, Alaska, the northwest United States, southwest Canada, the Hindu Kush region of the Himalayas, the Arctic and the Andes are all rapidly losing mass. Europe’s glaciers were gaining mass from the mid-1970s until 2000, when the trend started reversing. Some may disappear by the end of the century—the consequence of rising temperatures.

Indeed, the report does note that there are some glaciers that have grown—though the trend overall is still decline. Why? Higher levels of precipitation in some areas has caused the growth in places like western Norway, New Zealand, and part of the Tierra del Fuego region of South America. Other mountain ranges are experiencing some contradictory effects—parts of Asia’s Karakoram range, for instance, have seen glaciers making a comeback after 50 years.

To say the headline is disingenuous would, of course, be an understatement. It’s particularly problematic given all the attention to the glaciers issue this year. Skeptics latched on to a minor error in a report by the Intergovernmental Panel on Climate Change that gave an incorrect estimate of the rate of decline for Himalayan glaciers. The error has since been acknowledged and corrected, but has nevertheless been used to undermine the entirety of the IPCC’s work. This regardless of the fact that the overwhelming majority of the earth’s glaciers are receding—just maybe not quite as fast.

The press has really blown it on coverage of this and other issues of science on global warming in the past year. The Sunday Times had to publish a retraction for a horrible story that dramatically distorted the IPCC’s findings on impacts in the Amazon. They did retract it, but these things do have consequences—that story was repeated 20,000 times on the web before the correction.