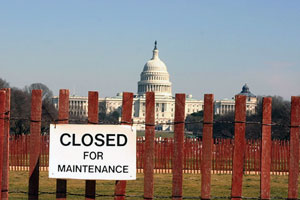 Tea party activists have had much be angry about in recent weeks, after discovering their success in the midterm elections wasn’t yielding them any immediate power on Capitol Hill. They’ve lost every fight they’ve weighed in on during the lame duck session of Congress, including GOP elections for key committee posts, the passage of a food safety bill, and most likely, the Obama tax cut plan. Undaunted, they are now getting fired up for one last battle before hunkering down to wrap Christmas presents, and this one is a whopper. Tea partiers want to end the year with a government shutdown.

As Congress this week attempts to pass an omnibus spending bill that would fund the federal government for another year, tea partiers are demanding that the GOP refuse to vote for the bill until it is stripped of earmarks, even if that means closing the Washington Monument and infuriating millions of seniors reliant on Social Security. The spending bill is loaded up with 6,000 earmarks, totaling about $8 billion. This is only .72 percent of the $1.1 trillion measure, but these earmarks send gobs of federal money to various members of Congress’s home districts for such things as harbor dredging, grape virus research, and infrastructure repairs.

Earmarks are anathema to tea partiers. When leading tea partiers drafted a “Contract from America” this summer in an attempt to get members of Congress to pledge fealty to their agenda, an earmark ban was high on the list. The tea partiers were somewhat shocked that Republicans who claimed to be tea party supporters refused to sign the contract, primarily because of the earmark measure. That’s when these conservative activists seemed to discover for the first time that Republicans love earmarks as much as the average Democrat. Since then, some Republicans have come around and disavowed earmarks, even if they haven’t actually withdrawn their requests in the omnibus bill. But that’s not enough for the tea partiers. They want a show of force over the issue, and they don’t care if that means the federal government grinds to a halt until the issue is resolved.

So far, as of 1 p.m. on Thursday, more than 1,000 people had signed an online petition that says:

We, the undersigned grass roots activists from across America, do hereby support and encourage the immediate shut down of the United States Government until:

1. All earmarks are removed from the Omnibus Bill or
2. A continuing resolution, excluding any earmarks or other business, is signed through the month of February.

In support thereof we submit the following:

The will of The People is not reflected in the Omnibus Bill.

It is in the best interest of The United States of America that the terminated Congress members be barred from voting on future policy or laws.

Shutting down the government did not work out well for Republicans the last time they tried such a gamble, back in 1995. That’s when then-Speaker of the House Newt Gingrich blocked passage of a spending bill and ended up closing the federal government for 21 days because President Bill Clinton refused to give in to GOP demands for big spending cuts in social service programs including Medicaid. The showdown is credited with boosting Clinton’s approval rating and it was widely viewed as securing his reelection the following year.

As it turns out, there’s nothing like shutting down the government to remind people exactly what it does do for them. Dick Armey was part of the House GOP leadership when it tried to win the shutdown fight. Now, he’s a tea party hero as the chairman of the advocacy group FreedomWorks. And Armey isn’t exactly champing at the bit to do it all over again. As he explained in 2006 to author Ryan Sager:

Newt’s position was, presidents get blamed for shutdowns, and he cited Ronald Reagan. My position was, Republicans get blamed for shutdowns. I argued that it is counterintuitive to the average American to think that the Democrat wants to shut down the government. They’re the advocates of the government. It is perfectly logical to them that Republicans would shut it down, because we’re seen as antithetical to government. I said if there’s a shutdown, we’re going to get the blame.

While Armey might have seen the light about shutting down the government as a negotiating gambit, Gingrich has not. He’s in a small camp of conservatives that includes Dick Morris, Rep. Steve King (R-Iowa), Rep. Louie “terror babies” Gohmert (R-Texas), and well, Joe Miller, who really isn’t going to be in the Senate next year. Even incoming House Majority Leader Eric Cantor has retreated from the shutdown option publicly, angering many tea partiers in the process.

While there may be many comparisons between 1995 and 2010, there’s one big difference today: the economy. The dire financial straits of the country and many of its residents may have helped fuel the tea party movement, yet shutting down the federal government in the middle of a huge recession and nearly 10 percent unemployment would probably be far more grave and destabilizing than it was in 1995, when the unemployment rate was half that. Cutting off food stamp benefits alone would result in 40 million people potentially going hungry. (The number of Americans on food stamps in 1995 was 26 million and falling.) Combined with the nearly 60 million people who receive Social Security, nearly a third of the country depends on regular government checks—and that doesn’t include the nearly 10 million people on unemployment.

If tens of millions of people wake up one day and discover that they aren’t going to be able feed their families thanks to GOP quibbles over what amounts to less than 1 percent of the spending bill, the tea party and their GOP allies could be in for one hell of a blame-game. The economy makes the tea party demand for a government shutdown a dangerous gamble; it’s also one reason why it’s not likely to happen.

UPDATE: Tea partiers have been quickly disappointed that the government will not, in fact, get shut down. Late Thursday night, Sen. Harry Reid (D-Nev.) pulled the omnibus spending bill from consideration in the face of Republican opposition, and instead will move forward with a continuing resolution that would do little more than fund the government until the new Congress can take up the spending measures again.