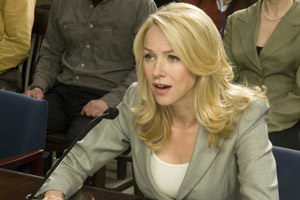 The Washington Post‘s editorial page suffers from Post-Traumatic Stress Disorder. The cause: the newspaper’s inability to come to terms with its cheerleading for the Iraq war. The symptoms were most recently manifested in an editorial that slammed the movie, Fair Game, which is a Hollywood treatment of the Valerie Plame/CIA leak case that culminated with the 2007 conviction of Scooter Libby, Vice President Dick Cheney’s chief of staff. The Post huffed that the movie is “full of distortions—if not outright inventions.” But the paper’s editorialists protest too much—and reveal their own biases.

When the movie opened, two veteran Post reporters who covered the CIA leak case—Walter Pincus and Richard Leiby—wrote an extensive article detailing what portions of the movie were fact and what were the product of dramatic license. The pair noted that the film exaggerates Valerie Plame Wilson’s role in a specific intelligence operation aimed at gathering intelligence on WMD activity within Iraq. (In the book I co-wrote with Michael Isikoff, Hubris: The Inside Story of Spin, Scandal, and the Selling of the Iraq War, we revealed that she was the operations chief of the CIA’s clandestine Joint Task Force on Iraq.) And the movie, the pair report, may stretch the truth in the scenes in which Iraqi scientists who cooperated with the CIA are stranded in Iraq when Valerie Wilson’s CIA identity is revealed in a newspaper column by conservative Bob Novak. But Pincus and Leiby concluded, “the movie holds up as a thoroughly researched and essentially accurate account.”

Not so, huffs the editorial page, which has long been edited by Fred Hiatt, a fervent supporter of the Iraq war. The editorial takes issue with the movie’s depiction of Valerie Wilson’s husband, former Ambassador Joe Wilson, “as a whistle-blower who debunked a Bush administration claim that Iraq had tried to purchase uranium from the African country of Niger.” Joe Wilson, in case you’ve forgotten, was dispatched by the CIA to Niger in 2002 to check out the allegation that Iraq had obtained yellowcake from Niger that could be used to produce nuclear weapons. The CIA’s decision to send Wilson to Niger had been sparked by a request from Cheney for more information on the unconfirmed and sketchy Niger allegation.

When Wilson returned from Niger, he told the CIA that based on his conversations with former Nigerien officials, he had concluded that such an Iraq-Niger uranium deal was highly unlikely. And in July 2003—months after President Bush launched the Iraq war with the claim that Saddam Hussein posed a serious WMD threat—Wilson wrote a New York Times op-ed maintaining that the Bush-Cheney administration had “twisted” some of the pre-war “intelligence related to Iraq’s nuclear weapons program.” He wrote that he was basing this conclusion on the administration’s public use of the Niger charge—which President George W. Bush had cited in that year’s State of the Union speech—despite what Wilson had told the CIA. This is the somewhat mild way Wilson put it in the op-ed:

The vice president’s office asked a serious question. I was asked to help formulate the answer. I did so, and I have every confidence that the answer I provided was circulated to the appropriate officials within our government. The question now is how that answer was or was not used by our political leadership. If my information was deemed inaccurate, I understand (though I would be very interested to know why). If, however, the information was ignored because it did not fit certain preconceptions about Iraq, then a legitimate argument can be made that we went to war under false pretenses.

Let’s start with the ending to the Niger tale. There was no deal. The allegation was wrong. The Senate intelligence report cited by the Post editorial noted that in April 2003, the National Intelligence Council issued a memo saying “we judge it highly unlikely that Niamey has sold uranium yellowcake to Baghdad in recent years.” Two months later, the CIA produced a memo (quoted in the same Senate report) stating, “we no longer believe there is sufficient…reporting to conclude that Iraq pursued uranium from abroad.”

The paramount issue is not whether Wilson’s report affected the intelligence community’s view on the matter. (It probably should have.) At the time, there was dissent within the intelligence community over this charge. State Department intelligence analysts thought it was bunk and they dissented from an intelligence report that included this allegation. And in the fall of 2002, the CIA was no longer endorsing this charge; it instructed the White House not to use the allegation in its public case for war. In a memo to the White House, the CIA said it was “debatable whether” Iraq could obtain uranium from Niger and “we told Congress that the Brits have exaggerated this issue.”

The Post (or Hiatt?) refers to a British probe that said using the Niger charge was “well-founded,” but it ignores the vast paper trail showing the CIA and the State Department concluded the opposite. That is mighty convenient.

The editorial goes on to dismiss the CIA leak investigation:

“Fair Game” also resells the couple’s story that Ms. Plame’s exposure was the result of a White House conspiracy. A lengthy and wasteful investigation by a special prosecutor found no such conspiracy.

Not really—that is, not if you believe the person who headed that investigation.

It is clear from the public record that senior White House officials engaged in a non-public campaign to discredit Joe Wilson after his article appeared, and Cheney was a participant in that endeavor. At the end of the trial of Scooter Libby—who was found guilty of having lied to about his role in this effort—prosecutor Patrick Fitzgerald essentially accused the vice president and Libby of plotting. Here’s how I described Fitzgerald’s summation at the time:

“There is a cloud on the vice president,” Fitzgerald replied, explaining that Cheney had written notes indicating he was interested in the Valerie Wilson connection and that Cheney had sent Libby to the meeting with [then-New York Times reporter] Judy Miller where Libby (according to Miller) told her that Wilson’s wife worked at the CIA. “And that cloud remains,” Fitzgerald declared, “because this defendant obstructed justice….That cloud was there. It was not something we put there.”

That sounds like a conspiracy. It’s not as if there was a meeting in which White House aides planned the leaking of Valerie Wilson’s CIA identity. At least, no evidence of such a gathering has ever emerged. But there was a White House push to throw whatever it could at Joe Wilson, and the plotters believed that if they leaked information about his wife’s connection to the CIA, they could diminish his credibility—maybe by making the trip look like some nepotistic junket or a political attack on the administration cooked up by the CIA.

The Post editorial points out that the prime source of the leak in Novak’s column was a State Department official (a reference to Deputy Secretary of State Richard Armitage)—as if this is proof there was no White House get-Wilson scheme. But it neglects to mention that Karl Rove was the second source for that column and that Bush’s top strategist also told another reporter about Valerie Wilson’s CIA connection. In this regard, the Post is behaving like Bush, who in his recent memoirs airbrushed Rove out of his brief description of this scandal. (Both Bush and the Post duck any discussion of how the White House falsely denied that Rove had been involved in the leak.)

The Post editorialists have long tried to cover for Cheney and Co. on the leak case. A 2006 editorial defended Bush and Cheney for selectively leaking intelligence about Iraq’s supposed WMDs to Judy Miller. The information Libby passed to her contained the Niger charge, but not the dissents. Still, the Hiatt gang hailed this leak, designed to win PR points for the administration, as admirable. It was essentially an endorsement of media manipulation.

The recent Post editorial stated the obvious: “Hollywood has a habit of making movies about historical events without regard for the truth.” But it claimed Fair Game stands out, because “the film’s reception illustrates a more troubling trend of political debates in Washington in which established facts are willfully ignored.” But it’s the Post editorial board that is ignoring key facts and selectively citing evidence to manufacture a narrative of its own liking: Joe Wilson lied, and Bush & Cheney did not (with an assist from the Post editorial page) mislead the nation into war. The difference between the editorialists and the filmmakers, though, is that Hiatt and his colleagues, as journalists, cannot claim dramatic license.