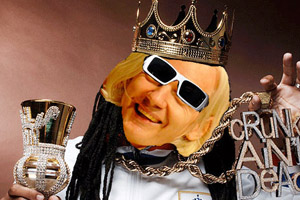 Over at McSweeney’s, Ben Greeman has imagined some scenes from WikiLeaks! The Musical, in which a playground snub inspires the young Julian Assange to leak the impossible leak. In a moment that evokes both The Social Network and a Disney princess movie, Assange channels his frustrations and aspirations into song:

I’ll dub myself Mendax
It means “noble liar.”
I’ll remake myself as a
High-tech town crier
When people attempt
To hide information
I will be the one
To compel revelation

In fact, the real-life Assange tried his hand at writing lyrics in 1995, when he penned “The Dan Farmer rap,” a nerdy, profane, and homophobic rhyme about a rival digital security geek. Some selected verses, written under the handle “Proff”:

I’m Dan Farmer, you can’t fool me –
the only security consultant to be on MTV.

AC/DC – from the front or from behind,
you can fuck my arse but you can’t touch my mind.

Read the full rap after the jump. The Dan Farmer rap got mixed reviews, as Assange wrote a few days after its release: “[A]fter a rather hetic [sic] weak, I return to find my mail box stuffed with assorted flames, congratulations and occasional mis-directed but rational advice about my posting of ‘The Dan Farmer rap’. Unfortunately flames outweighted the latter two categories by a 3:1 ratio—and I received a lot of endorsements.” Though the rap was meant as good fun, he conceded that it might have been better to keep it…secret: “The DFR had been circulating in security circles for a week or so as an object of wry humor prior to its public release. In retrospect, this is probably where it should have stayed.” Assange said his real mistake was assuming that a larger audience would appreciate his rhymes: “Such mistakes are ripe to happen when one is merry and full of wine in the wee hours of the morning.”

Fortunately, Assange stuck to writing code. Though recently, he ventured into the studio for a cameo in an episode of the satirical Rap News, in which he attacked a rhyming rival who dared touch his hair. (Stick around until around 4:55.)

And for more Assange-inspired musical madness, check out MoJo cartoonist Mark Fiore’s Disney-WikiLeaks mashup set to the tune of “It’s a Small World.”

And now, the complete “Dan Farmer rap”, by Proff, AKA Julian Assange:

I’m Dan Farmer, you can’t fool me –
the only security consultant to be on MTV.

AC/DC – from the front or from behind,
you can fuck my arse but you can’t touch my mind.

philosophy’s the trip – evil ‘n’ stuff,
god, we know a lot, Mike me and Muff.

A real ardent feminist – just like she tells me to be,
see me out there rooting for sexual e-qual-ity.

Perhaps you’ve heard of it? Its called SAY-TAN
And it can turn any hacker into a real man!

It’s so clever it can penetrate any inter-net-site,
you see against my SAY-TAN they just can’t fight.

Its slick its clean. what? no! it ain’t no bomb!
I’ve been told it does quite well for fish dot com.

Yes, more than just attack, its has pretty icons too!
So your average 14 year old – he knows what to do!

Written in in perl5 – a language so fast and so clean.
Hhat? Well see here, at least it is is on MY machine.

No back door! really only one little mistake –
but those CERT bastards won’t give bi-sex-uals a break.

SGI? Their discrimination it makes me want to explode.
No, its a lie! Who told you it was because I couldn’t cut code?

Weitse Venema? Umm, No, never heard of him. hang on,
yes I have some recollection but its extremely dim…

He’s a guy from the Netherlands – but he wasn’t right,
from behind those Norwegians are way too tight.

I coded it all – yes the mighty Dan did it alone,
if you don’t believe it, you and your note pad can fuck off home.

I’m Dan Farmer – now take that down – its not every
day you get to interview the worlds biggest security clown.

For archives of Assange’s posts to various security newsgroups, including the group where the Dan Farmer rap was posted, see here and here.