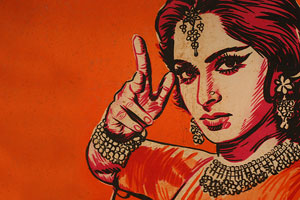 Kurbaan starts just like any other Bollywood flick: An unknown woman is irritated by an unknown man who’ll eventually win her heart. In this case, the man tricks her and takes the cab for which she was waiting in line. But this film is not your typical Mumbai-based song-and-dance production: It’s a heavy-handed action film…and a cautionary tale for terrorists! And according to a WikiLeaked State Department cable, it may be the product of a conspiracy between American diplomats and Bollywood bigwigs to propagate an “anti-extremist genre” in Indian films.

The leaked cable recounts a 2007 London meeting between US officials and several Indian producers, directors, and actors. The parties discussed “the potential of working with the Indian film industry—’Bollywood’—on delivering an anti-terrorism message” that would help clip extremism, particularly in the British Muslim community:

A lively discussion produced a number of possible ideas, including developing ways to promote existing anti-terrorist films, and to develop funds for similar productions. Once such an anti-extremist genre is established, participants believed that major Bollywood figures would be willing to speak out on the issue.

If UK Muslims of South Asian descent are sitting on some sort of a “To bomb or not to bomb?” fence, a film industry widely known for its sultry song and dance numbers seems like an unfit propaganda partner:

But, even if that’s what you think of when you think of Bollywood, that’s not all there is. Kurbaan director Rensil D’Silva—who was not at the London summit—left out the midriff-baring song-and-dance numbers and cut straight to the message in many of the dialogues: “But even for a second, don’t think this is Allah’s will…because Allah’s will does not justify taking a life. And whenever a bomb explodes, only innocents die.”

There’s certainly no fault in such a message—except that in the case of Kurbaan, it fails to acknowledge the complex ideology of radical Islamists, reducing terrorists’ intentions to mere revenge for the loss of a family. The closest the film comes to grasping the nuances of the Muslim world is a quick reference to the CIA:

But if this film is indeed part of the US’s propaganda campaign, the only responses we’ve heard from conservative Muslims—in India, at least—are a resentment of stereotypes, offenses taken at the song lyrics, and consternation about the heroine’s smooth, bare back shown on Kurbaan‘s movie posters. Whatever America’s plans are for it, Bollywood has a long way to go before winning any wars of ideology.