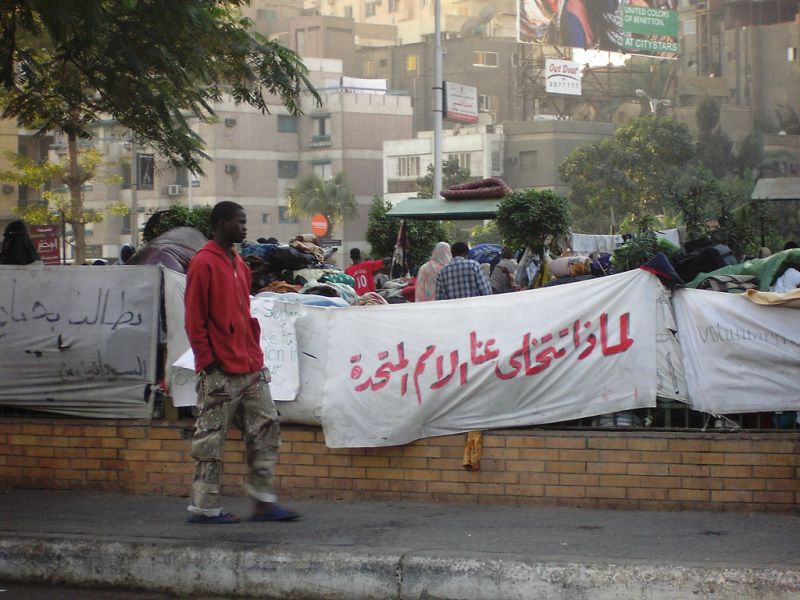 Sudanese refugees camp out for three months outside Cairo's UN building in late 2005 before getting crushed by Egyptian police. The Arabic sign reads, "Why does the UN forsake us?" / Photo Courtesy of Youssef Assad

As millions of protesters from diverse political and socio-economic backgrounds take to the Egyptian streets, African migrants from Sudan and elsewhere are holing up inside their homes. I called a few of them to find out why.

“I don’t know any Sudanese who are participating,” said Abdel Raheem, a 28-year-old Sudanese Cairo resident. “I saw on the news that people are being arrested. For someone who’s not Egyptian, this would be really bad.”

S.H., a Somali refugee in Cairo who asked that only his initials be used, agreed. “I’m not in a position to speak for the whole Somali community, but I have called some of my close friends, and everyone is staying home and watching the situation closely,” he told me. “They wouldn’t be safe.”

An estimated 2-3 million migrants, refugees, and asylum-seekers now live in Egypt—and they have good reason to fear the Egyptian authorities. The last time they banded together to gain greater freedoms, they were rewarded with lethal suppression.

In late September 2005, approximately 3,000 mostly Sudanese migrants and their supporters set up a makeshift tent camp outside the United Nations High Commissioner for Refugees building in Cairo. For three months, they called on the UNHCR to resettle them in other countries. They also protested their frequent harassment and imprisonment by the Egyptian police, and demanded access to public schools and health care, as well as the right to work legally in Egypt.

On December 30, 2005, the Mubarak government crushed this peaceful sit-in demonstration. About 4,000 Egyptian police encircled the camp, fired water cannons into the crowd, dragged women by their hair, and beat people indiscriminately, according to media reports. More than 2,000 protesters were arrested and at least 27 migrants, including one toddler, were killed in what the Egyptian Interior Ministry alleged was a “stampede.” Only after the aggressive intervention of the UNHCR and human rights organizations did the Mubarak government rescind its plans to deport 645 of the detained people as “illegal immigrants.”

The Mubarak government’s repression of African migrants has escalated ever since. According to a 2008 Human Rights Watch report, Egyptian border authorities implemented a policy of “shoot-to-stop” in the remote border zones. In a two-year period, thirty-three Israel-bound migrants—including young children—were shot and killed by Egyptian security forces.

In addition to their well-founded fears of being killed, arrested, or deported, migrants are also avoiding participation in this week’s pro-democracy demonstrations because they feel no sense of “Egyptian” identity.  Egyptian civilians have ostracized them with racist names like “samara” meaning black, “funga monga” meaning monkey, or “abit” meaning slave.

“The protests are a sacrifice for the Egyptian people—it’s not for us. It’s not our nation.” Abdel Raheem said.

While refugees hope that the protests will bring a new government that is more sympathetic to their plight, they harbor grave concerns that, in the short term, Egypt will descend into chaos.

“I think the refugees are not excited about the protests,” said S.H., a Somali refugee who cautiously ventured outside on Sunday to watch the demonstrations from a safe distance. “Refugees are running from turmoil and unrest. They came here for protection.”

He added sadly, “[Refugees] know what can happen when things get out of control.”