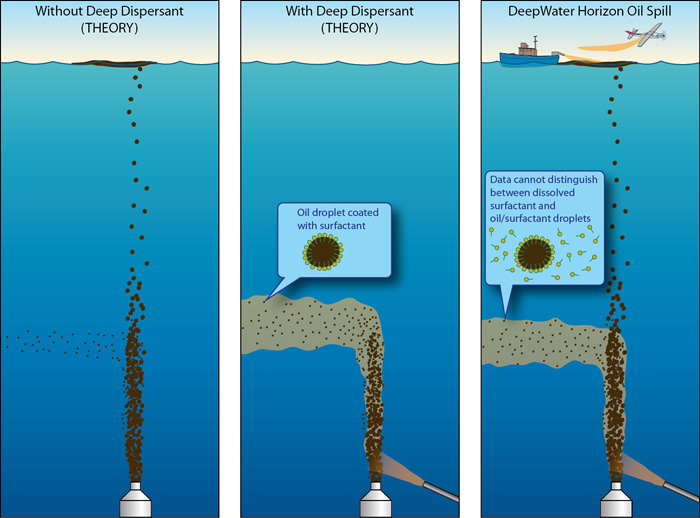 In the Deepwater Horizon spill (right panel), scientists found evidence that the dispersant mixed with the small droplets in the deep-water hydrocarbon plume but also discovered the oil/dispersant mix had not yet biodegraded several months after the spill. The study could not distinguish between oil droplets coated with surfactant (which would suggest the dispersant worked as planned) and surfactant floating freely on its own (suggesting the substance did not attach to the oil, as intended). Illustration: Jack Cook, Woods Hole Oceanographic Institution.

Here’s a quick look at a forthcoming paper in Environmental Science and Technology on the fate of BP’s dispersants. As you may recall, BP loosed ~2.1 million gallons of chemical dispersants—1.4 million gallons to the surface and 0.77 million gallons into deepwater at the wellhead—in an attempt to break the oil into small droplets.

The authors note that surface dispersants had been used and (somewhat) assessed before Deepwater Horizon, with a cautious consensus that these chemical brews might mitigate oiling on marshes and other shorelines.

But the injection of dispersants deep underwater had never been tried before, and never studied. This is what I referred to in BP’s Deep Secrets as the biggest baddest field experiment of all time.

To track the deep dispersants, two of the authors—Elizabeth Kujawinski and Melissa Kido Soule—developed a new chromatographic technique to trace DOSS (dioctyl sodium sulfosuccinate), a component of both the Corexit formulations used by BP. The findings from three cruises in the Gulf of Mexico:

Although the dispersants were persistent (long-lived and widely-traveled), it’s not clear if they actually dispersed or sequestered any of the oil.

Based on our observations, we cannot assess whether the dispersant application was successful in reducing the oil droplet size or in increasing the sequestration of oil in deep water. However, we can conclude that DOSS, and presumably the other Corexit components, became sequestered in deep plumes. Two or more possibilities may explain these observations. In one scenario, DOSS dissolved into the water during ascent and detrained at approximately 1100 m through partitioning with methane, water, gas hydrate, or other phases. In this case, if the DOSS dissolved completely or partitioned with natural gas, it may suggest that the dispersant was rendered unavailable to the oil and thus ineffective in dispersing the liquid oil. In a second scenario, Corexit was associated with small liquid oil droplets that were sequestered in this plume. If the DOSS was deposited in these small oil droplets, it may suggest that the chemical dispersion was highly effective. We have rejected the hypothesis that DOSS was associated with large oil droplets since their higher buoyancy would be expected to force them to travel to the surface, presumably releasing dispersant en route.

The effects of these dispersants on marine living in or migrating through the deepwater is equally ambiguous:

[F]urther tests are needed to assess stress responses of pelagic biota to oil, gas, dispersant, and associated mixtures. In particular, our study has not assessed the fates or reactivities of the nonionic surfactants and the hydrocarbon solvents present in Corexit 9500A, each of which may have unique toxicological impacts. In short, the application of this material in the deep ocean is new and unprecedented and so merits further study of pelagic macro- and microbiota at environmentally relevant Corexit concentrations and dispersant-to-oil ratios.

Here’s the abstract in full:

Response actions to the Deepwater Horizon oil spill included the injection of ∼771,000 gallons (2,900,000 L) of chemical dispersant into the ?ow of oil near the sea?oor. Prior to this incident, no deepwater applications of dispersant had been conducted, and thus no data exist on the environmental fate of dispersants in deepwater. We used ultrahigh resolution mass spectrometry and liquid chromatography with tandem mass spectrometry (LC/MS/MS) to identify and quantify one key ingredient of the dispersant, the anionic surfactant DOSS (dioctyl sodium sulfosuccinate), in the Gulf of Mexico deepwater during active ?ow and again after ?ow had ceased. Here we show that DOSS was sequestered in deepwater hydrocarbon plumes at 1000-1200 m water depth and did not intermingle with surface dispersant applications. Further, its concentration distribution was consistent with conservative transport and dilution at depth and it persisted up to 300 km from the well, 64 days after deepwater dispersant applications ceased. We conclude that DOSS was selectively associated with the oil and gas phases in the deepwater plume, yet underwent negligible, or slow, rates of biodegradation in the affected waters. These results provide important constraints on accurate modeling of the deepwater plume and critical geochemical contexts for future toxicological studies.