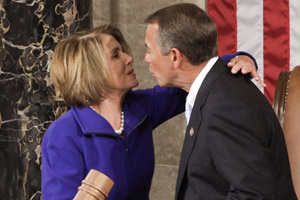 After the Tucson tragedy and President Obama’s call to “sharpen our instincts for empathy” in the face of a fractious national political discourse, will Congress become a more civil place? Here’s a small case study.

As lawmakers gathered on Wednesday to honor Tucson’s victims and pray for the recovery of their colleague, Rep. Gabrielle Giffords (D-Ariz.), Rep. Bill Shuster (R-Pa.) vowed in an interview with Mother Jones that the Republican Party would resume—as aggressively as ever—their effort to repeal health care reform next week. But he stumbled over his own words when he began to invoke his party’s signature critique of the Obama administration—its “job-killing” agenda. “Imposing this health care regime on our businesses and our families is going to—I don’t want use the word ‘kill’—is going to stifle, it’s going to hinder, it’s going to stop businesses from creating jobs,” he said. That is: kill, but not “kill.”

In the wake of Tucson, lawmakers are surely going to think twice about what they say and how they say it, says Tevi Troy, a senior fellow at Hudson Institute and former Bush administration official who opposes health care reform. “Elected officials will be more careful going forward—they will read over prepared remarks and speeches make sure there aren’t inappropriate metaphors or demonization,” he said.

Perhaps—but for how long?

On Capitol Hill this week, Republicans and Democrats remarked on the new tone. “To the credit of both parties, we have come together to deal with this tragedy in a very unified way…bipartisan concern, bipartisan sympathy, and bipartisan resolve,” freshman Rep. Chuck Fleischmann (R-Tenn.) said. Rep. G.K. Butterfield (D-N.C.) was optimistic that the new era of congressional civility would last. “This is a 9/11 moment in the life of members of Congress—this is going to change the way we do business,” he said. “We’re going to be, on both sides of the aisle, more respectable. We’re going to be very careful about how we say things, because words matter.”

Earlier this week, Rep. Chellie Pingeree (D-Maine) called on House Republicans to change the name of their health care repeal bill—dubbed the “Repeal the Job Killing Health Care Law Act”—to avoid using the word “killing” so soon after the Arizona shooting. “It doesn’t have the most pleasant connotations to us this week—why not say something else?” Pingeree said, explaining that the shooting offered members of Congress an opportunity “to be more civil to each other.” So far, though, she’s gotten no takers on the Republican side when it come to changing the name of the repeal legislation.

Other Democrats have called for far more sweeping restrictions on political speech, invoking everything from the now-defunct Fairness Doctrine—which used to require talk-radio stations to broadcast opposing points of view—to a bill to crack down on threatening imagery against lawmakers and judges. But many Republicans have pushed back against the calls to dial down incendiary rhetoric as a liberal attack on free speech meant to target conservatives for political gain. “The hallmark of our country has been the vigorous and vibrant debate—I don’t expect that slow down,” Rep. Jason Chaffetz (R-Utah) said. “I don’t want that slow down.” Though Chaffetz decried “the politics of personal destruction,” he denied that the status quo in Washington was symptomatic of a larger problem: “No, we’ve had a vigorous debate over issues—I think that’s healthy for the country.”

Likewise, some Democrats are equally skeptical that the tone of national politics—or the substantive agenda of Congress—will change after Arizona. “If history serves as any prologue, it will be back to the usual with no discernable—let alone substantive—change in policy or practice,” said Rep. Jim Moran (D-Va.). “I held some faint hope after 32 students were massacred at Virginia Tech that we might do something. But no.” He noted that Congress failed to enact meaningful gun-control laws after the 2007 tragedy.

Moran says he hardly saw Wednesday’s outpouring of sympathy on the House floor as a sign of hope. “All the self-righteous condolences that are going on on the floor as we speak—” he said. “The more anxious people are to express their sadness, the less likely they are to do anything to prevent it from recurring.”