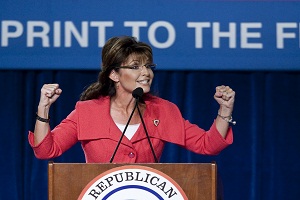 Responding to criticism she received after the January 8 Tucson shootings, Sarah Palin referred to death threats she and her children have received, suggesting that the Palin clan have been victims of heated political rhetoric. And an aide noted that the Palin team was consulting with security professionals. Andree McLeod, a prominent Palin critic in Alaska, could also use such help, for she has been publicly threatened with assassination—just for requesting, under Alaska’s open records act, the work-related emails Palin sent and received while governor.

On December 29, the Anchorage Daily News posted an article reporting that four journalists and McLeod, a local citizen activist, were still waiting for the state to release Palin’s emails in response to requests that they had filed two years earlier. (I am one of those journalists.) The Anchorage Daily News noted that the governor’s office had recently asked for and obtained from the state attorney general the 14th delay in processing the request, and it highlighted McLeod’s role in the request. The paper reported:

McLeod has accused the administrations of Palin and her former lieutenant governor and now successor, Sean Parnell, of abuse of power “with these delay tactics.”

“Who does Sean Parnell protect and defend by keeping these official e-mail documents secret?” McLeod wrote to Sullivan, objecting to the proposed 14th delay. “Who does he serve? Ex-governor Sarah Palin, or the people of Alaska?”

Two days later, an anonymous person posted a death threat targeting McLeod in the “Rants & Raves” section of the Anchorage Craigslist. The posting, which echoed an email sent to the Anchorage Daily News, read in full:

I find it very offensive that Andre Mclead [sic] is asking the state for every e-mail written or received in ANY account maintained by Palin and her husband. Where does this bitch get off thinking the public should shell out for her revenge for the Palin family. I’ve heard enough from this, and I would like to use stronger words to express my feeling for Andre. Well…I think Andre has used up to [sic] much oxygen. So I have my scope cross hair on her head! She better watch out, the request may have been her last!

I know you won’t publish this. ADN relish in bashing the Palin’s too!

Let’s clean up the political garbage.

On January 10, McLeod learned about the Cragislist post and contacted the Anchorage police. According to a police report obtained by Mother Jones, a sergeant named Michael Couturier, who is assigned to the cyber crimes beat, contacted Craigslist and asked the service to take down the posting and for information on the person who had posted the threat. The threat was subsequently removed, and the police report notes that the suspect used an AOL email address associated with an Anchorage woman. (The report names the woman, but Mother Jones is not identifying her at this point.)

“I have my scope cross hair on her head! She better watch out, the request may have been her last!”

After gathering emails that this woman—or someone using that email account—had exchanged with a reporter at the Anchorage Daily News, Couturier forwarded all the “pertinent information” to assistant attorney general Marika Athens, according to the police report. Athens, the report notes, “responded that there was nothing [Anchorage Police Department] could do at this point unless [the Anchorage woman], or whoever sent the email, took some act of furtherance toward Ms. McLeod.” Athens, according to the report, told the police that “law enforcement contacting this person might even spiral the situation up rather than make things better.” Athens suggested that the police inform McLeod that she had the option of applying for “a restraining order if she was in fear of [the Anchorage woman].”

The police suspended the case.

Mother Jones sent a request for comment to the email address listed in the police report for this Anchorage woman. We received no reply.

This 50-something Anchorage woman does maintain a MySpace page. On the site, she lists her interests as camping, hunting, and praising the Lord. The page is full of references to Jesus. One graphic on the page cites Jesus as her “anti-drug.” She mentions that she has two children with military experience.

After suspending the case, the police department sent McLeod an email noting that the emails the suspect had exchanged with the Anchorage Daily News “would lead a person to believe that the poster” was this Anchorage woman, but that “just because we think we know who owns the IP we have not verified who was actually sitting at the computer at that IP address and posted this threatening communication.” The police also informed McLeod that the attorney general’s office had concluded that there was not “probable cause for a search warrant without some act of furtherance,” such as the suspect trying to contact McLeod.

In other words, case closed—totally. The police, according to the police report, had not attempted to verify whether the Anchorage woman was indeed the person who had posted the threat. McLeod says she found this curious.

McLeod is used to being attacked by political foes. After she filed several ethics complaint against Palin, then-Gov. Palin in March 2009 indirectly referred to her as someone “with a political vendetta bent on personal destruction.” About that time, a Palin fan blog called McLeod a “former high-priced prostitute” and a “ghetto bitch,” and it facetiously said that “State officials have recommended you pelt Andree with any nearby objects.”

In the aftermath of the Tucson shootings, McLeod wonders how concerned she should be about this explicit and specific death threat. “The violent and hate-filled rhetoric doesn’t only impact elected and public officials,” she says. “Here in Alaska, it’s trickled down and reached levels wherein strangers take their cues from supposed ‘leaders’ and target fellow citizens with bone-chilling threats. How broken is our system of justice that allows these kinds of horrid threats to continue unchecked?”