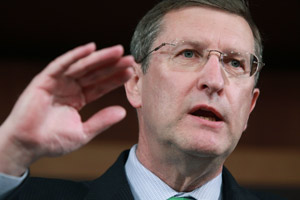 Sen. Kent Conrad (D-N.D.) won’t run for reelection in 2012, he told supporters on Tuesday. This is big news: Conrad is the first Democrat to announce his retirement in the wake of the epic drubbing the party suffered in November. “We believe this race represents one of the strongest pickup opportunities for Senate Republicans this cycle and will invest whatever resources are necessary to win next year,” Brian Walsh, a spokesman for the National Republican Senatorial Committee, told the New York Times. Republican Public Service Commissioner Brian Kalk has already formed an exploratory committee, but given Walsh’s confidence, the GOP field could deepen quickly now that Conrad is out.

This isn’t the first time Conrad, who was first elected in 1986, has bowed out. In 1992, he promised not to seek re-election if the federal budget deficit hadn’t fallen by the end of his term. After it became clear that wouldn’t happen, he upheld his promise, paving the way for now retired-Byron Dorgan to win the seat. But just months before the election, North Dakota’s other senator, Quentin Burdick, passed away. Conrad ran for and won Burdick’s seat in the special election held later that year.

In a letter to supporters, Conrad said his decision to not run again would free him up to find solutions to the nation’s fiscal problems during the rest of his term. Conrad, who heads up the Budget committee, wrote that “[t]here are serious challenges facing our state and nation, like a $14 trillion debt and America’s dependence on foreign oil…It is more important I spend my time and energy trying to solve these problems than to be distracted by a campaign for re-election.”

The loss of a veteran like Mr. Conrad who could run a competitive race in a conservative state next year shows the challenges facing Senate Democrats as they try to hold on to the Senate when they have twice as many seats up for re-election as Republicans.

But Democrats said they did not expect to essentially abandon the race as they did last year when Byron Dorgan announced he would not run for another term. They pointed to several potential candidates, including Earl Pomeroy, the former Democratic House member who lost in 2010.

“There are a number of potential Democratic candidates who could make this race competitive, while we expect to see a contentious primary battle on the Republican side,” Senator Patty Murray of Washington, the chairwoman of the Democratic Senatorial Campaign Committee, said. “North Dakotans have a long history of electing moderate Democrats to the Senate, and we believe they will have an opportunity to keep up that tradition.”