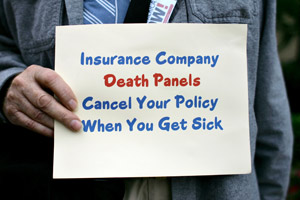 No sooner did the Republicans revive their crusade against Democratic health care reform than the law’s biggest boogeyman made a comeback as well. With the Senate unlikely to take up the repeal bill that passed the House last week any time soon, the GOP has started going after individual parts of the legislation. Among the first targets is a little-known provision creating an independent Medicare panel whose purpose, Republican critics insist, is to ration care and could speed patients to an early death—in other words, the 2011 incarnation of Sarah Palin’s “death panels.”

Under federal health reform, the Medicare Independent Payment Advisory Board (IPAB) will be a new, White House-appointed commission with the authority to change what Medicare pays for and how it pays for it—all without direct congressional approval. Many of health reform’s biggest supporters have celebrated IPAB, which starts in 2015, as central to the entire law’s ability to rein in ballooning Medicare spending. “It’s absolutely critical. It’s the centerpiece of the bill—the major way that you begin to control costs,” Sen. Jay Rockefeller (D-W.Va.) tells Mother Jones. But Republicans say the board embodies the most pernicious and outrageous faults of “Obamacare,” delegating authority to unelected bureaucrats who could deny care to patients at their most critical moments.

“When you have more people wanting care than you have dollars to pay for, you get in a line, you ration care,” declared Rep. Phil Roe (R-Tenn.), who introduced a House bill to repeal the IPAB on Wednesday. “The board will decide, maybe you’re 80 and that’s a little too old to have your knee redone.” The Tennessee Republican warned that the board would empower bureaucrats—who would each receive a salary topping $165,000—to decide, “No, you can’t have this treatment, because you’ve hit a budget limit.”

Analogies to Europe also abounded. Roe compared IPAB to a government board in England where bureaucrats might prescribe a blood transfusion for, say, chronic lymphocytic cancer—”if you’re over a certain age—rather than the more aggressive treatment that patients would typically receive in the US.” Rep. John Fleming (R-La.), insisted that the board would drag the US back to an even darker period of European history. “It will take you back to the old Soviet Union, that’s the way they did things—with a central planning committee that set prices, targeted costs,” her warned, adding that such economic policies ultimately led to the USSR’s downfall.

Republicans have also been egged on by Sarah Palin, who spawned the myth that the federal law would create “death panels” throughout the debate. Though she originally targeted Medicare-supported end-of-life counseling sessions that never made it into the final bill, Palin expanded her attack to include IPAB as well. The board, she argued in a 2009 Wall Street Journal op-ed, would “empower unelected bureaucrats to make decisions affecting life or death health-care matters.”

Though Palin’s claims were widely debunked—the non-partisan Politifact called her “death panel” remark the 2009 “Lie of the Year”—her remarks have continued to resonate throughout the right-wing echo chamber. When asked on Wednesday whether he would link the board to the popular concern about “death panels,” Roe replied: “Absolutely.” Attacking Sen. Mark Warner (D-Va.) for wanting to expand IPAB’s authority, one conservative Virginia blog accused the Democratic Senator of telling his constituents: “Sorry, you should have gotten cancer last year.”

In reality, the rules governing IPAB explicitly bar “any recommendation to ration health care.” The IPAB-endorsed Medicare reimbursement cuts are system-wide and will most directly affect physicians and other medical providers, who are lobbying to defang the board. Contrary to many of the examples that Republicans have offered, individual patients will not appear before any board or other bureaucracy. And Congress does have the authority to overturn its recommendations but only if the president agrees or it has a veto-proof majority.

Republicans, nevertheless, are drawing allies in their crusade against IPAB from the other side of the aisle as well. The board was only included in the Senate’s version of the health care bill, not the House’s, and the controversy surrounding its inclusion got buried in the last-minute flurry of negotiations during the reconciliation process to pass the bill. In fact, 72 House Democrats signed onto a letter opposing inclusion of the board, and four Dems voted against putting in the Senate version of the bill. Liberal Democrats raised concerns about delegating so much authority to a body independent of Congress: as Roe himself pointed out on Wednesday, Rep. Pete Stark (D-Calif.) has called IPAB a “dangerous provision” that would make Medicare cuts based on “an arbitrary and unrealistic growth rate.”

Even Rep. Henry Waxman (D-Calif.), one of Pelosi’s closest confidantes, admitted Wednesday that he had “some concerns” about IPAB for similar reasons. Waxman says that he’d be reluctant to strike down that particular part of the bill, but he added that he would “have to listen to the arguments and review again.” Close political observers, moreover, warn that IPAB repeal stands a real chance of making it through Congress. “Could it pass the Senate now, with Democratic support? Sure, given the intensity of lobbyist opposition to it, liberal opposition to it, and Rebpublican desire to strip anything out of [health reform] and call it a victory over the President,” said Len Nichols, a leading health-care economist and former Clinton administration official, though he added that making up for the substantial cost savings—estimated by the Congressional Budget Office to be $28 billion through 2019—would be a challenge.

Republicans admit that the most inflammatory attacks on IPAB are less likely to gain widespread support. “I don’t want to call them ‘death panels’—that’s just a red herring,” said Rep. Bill Posey (R-Fla.), a supporter of the bill to repeal the board. “I want to keep the discussion objective.” Posey, nevertheless, concurred with the central attack on the board—and stressed its potentially deadly implications for patients. “The danger for patients is that the board will not allow you to access care that you need,” Posey insisted. Could that include life-or-death treatments? “It could be anything,” he replied.