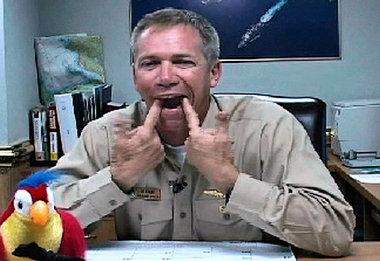 Screenshot courtesy of US Navy

And they say newspapers aren’t doing good work anymore. The Norfolk, Va., Virginian-Pilot revealed Saturday that Captain Owen Honors, the commanding officer of the nuclear aircraft carrier USS Enterprise, made a series of tactless videos for the crew’s entertainment a few years ago—videos whose coarse language and sexual frankness led his sailors to complain…and led the Navy to investigate. As everyone freaks out about Honors’ poor judgment, it’s worth noting where his generation of officers (including his commander) came from socially and culturally—and where we’re all headed if they’re in charge for much longer. More on that, as well as excerpts from the videos, below the jump.

In 2006 and 2007, Honors was the Enterprise‘s executive officer, its second in command. He apparently commandeered the ship’s public affairs A/V equipment to film some wacky introductions to the ship’s weekly movie night. (Aircraft carriers run closed-circuit TV programming to entertain sailors in their free time.) Mystery Science Theater 3000 this ain’t: This video is extremely dull and the humor is subpar, even for Navy vets who understand the lingo. And one can almost understand what Honors was going for, in terms of irreverence. Too bad he had to bring “fag boys,” jerk-off jokes, and naked women into it:

Anybody who’s read this James Webb novel or this one by Pat Conroy—both authors carrying significant military-machismo baggage—knows that young uniformed men on deployments concoct terrible fantasies and pastimes to sublimate their sexual tension, their ennui, their insecurity. Some of their leaders simply ignore this caustic brew. Some tolerate none of it. And then there are others, like Honors, who acknowledge it openly, who hope to enhance the calm and the morale by making light of it. When the result is an “I’m on a Boat” or Lady Gaga parody, fair enough. But when the result is Honors’ lowlight reel, you’ve got yourself a real WTF? moment. He should have known better.

And yet, Honors represents an old guard of senior officers who came up through the ranks in, ahem, “simpler” times. He’s Annapolis class of ’83, the first class to attend a fully male-female integrated Naval Academy (legend has it that his campus predecessors, the all-male class of 1979, wanted “last class with balls” inscribed on their class rings). While Honors was busy proving himself a talented combat aviator and test pilot, women were still struggling for the right to serve on warships and fly fighter jets—rights they didn’t win until 1993. (The rancorous debate over women in wardrooms and cockpits led many conservatives to dig their heels in on gay service, producing the Don’t Ask, Don’t Tell compromise that same year.)

By the time all of those stabs at institutional equality had been worked out, Honors was mid-career—probably set in traditional ways and senior enough that no subordinate was willing to tell him, “Sir, that’s a bad idea.”

Nevertheless, these video spots were made when he was the Enterprise’s second banana. At any point when these tapes aired, he could have been admonished—or at least gently prodded—to cut it out by the ship’s commander, Captain Lawrence S. Rice. Yet Rice apparently never intervened, and I’m not surprised: He’s a 1979 graduate of the Naval Academy, a member of that “last class with balls.”

Rice is now a one-star admiral responsible for making the military’s joint strategy and policy. His protege, Honors, has been by all accounts a capable mariner and flyer. But his lack of taste probably just cost him his job. One wonders how far he might have progressed up the ranks had these videos never seen light of day…and how many more sailors might have been subjected to his bad humor.