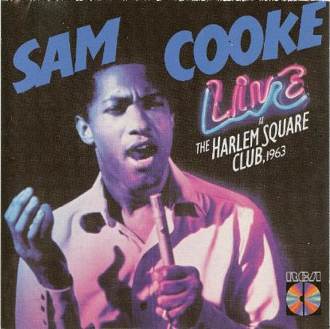 Eighty years ago last Saturday, Sam Cooke was born in Clarksdale, Mississippi. He started out as a gospel singer, and when he switched to recording secular music his smooth style made him an instant success. In the short 33 years before he was killed by a motel manager in Los Angeles, California, he wrote and recorded 29 Top 40 soul hits. In 2008, Rolling Stone ranked his voice as the fourth-greatest of all time, behind only Aretha Franklin, Ray Charles, and Elvis Presley. But Cooke didn’t always stick to the polished sound that made him famous. As his often-overlooked album Live at the Harlem Square Club, 1963 reveals, there were two very different sides to Mr. Soul.

Live at the Harlem Square Club wasn’t released for 22 years after it was recorded. The delay was due in part to the singer’s sudden death, but no doubt also to the fact that the album didn’t sound much like the Sam Cooke many fans of his recordings had come to know. He performed a spoken-word version of “You Send Me,” for example, that turned into a sped-up, drum-heavy, “Bring it on Home to Me” in which he shouts, “Everybody’s with me! Everybody is with me tonight!” And everyone was. It was a strikingly unpolished take on “Cupid,” “Chain Gang,” “Twistin’ the Night Away,” and seven other of Cooke’s biggest hits.

Cooke was a businessman who founded his own record label and knew how to sell music. (He added the “e” on the end of his name because he thought it made him seem classier.) He saw that in order for a soul song to have widespread appeal on radio stations and in places like roller-skating arenas, it needed to be pretty. As a trained gospel singer, Cooke could, in the words of Van Morrison, “sing anything and make it work.” And that’s exactly what he did on his studio recordings. But Live at the Harlem Square Club offers a taste of what he sounded like when wasn’t trying to “make it work.” The songs are wild, the timing is loose and the instruments are loud. “That sounds pretty good to me!” Cooke called out toward the end of the concert.

It’s impossible to know exactly why Cooke changed his sound for live performances. A clue, however, might be found in a story U2’s Bono told about the first time Cooke played a Bob Dylan record for the young singer Bobby Womack: “Womack said he didn’t understand it. Cooke explained that from now on, it’s not going to be about how pretty the voice is. It’s going to be about believing that the voice is telling the truth.” In Live at the Harlem Square Club, he wasn’t selling records, he was telling the truth.